WORLD Nevada marchers happy to be part of history

Nevada marchers happy to be part of history 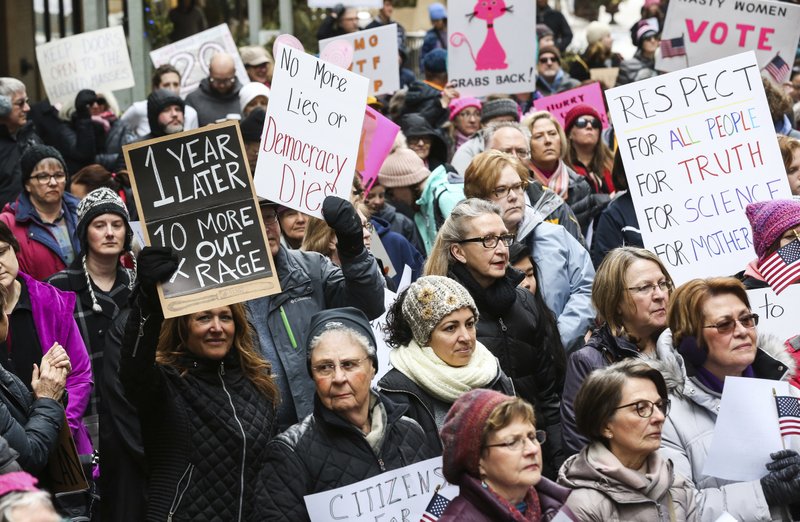 The Latest on women’s marches taking place around the world:

Some early arrivers at the Las Vegas women’s march, which is launching a voter drive and targeting swing states like Nevada, say they’re happy to be part of history.

Organizers hope the rally will recruit candidates to push back against the Trump administration and promote issues important to women, progressives and those feeling marginalized by the president’s policies.

University of Nevada, Las Vegas’ Sam Boyd Stadium, which holds 40,000 people, was about a quarter-full by late morning Sunday.

Among the crowd was Paula Beaty, who wore a women’s suffrage outfit from early 1900s.

The tech worker from Durham, North Carolina says women’s rights have been eroded with President Donald Trump in office.

Protesters have gathered near the Eiffel Tower to rally against sexual misconduct and sex discrimination in solidarity with women’s marches marking the anniversary of Donald Trump’s presidency.

Heavy rain fell in Paris during the event on Sunday, which could have been a factor in the small number of participants compared to the marches in the United States on Saturday.

Maggie Kan was one of the more than one hundred people who didn’t let the rain and cold deter them.

Kan told The Associated Press: “It doesn’t matter if the weather is like this. We’re still coming together, and we’re going to still fight against Trump and his agenda.”

Some of the slogans on posters raised at the Paris rally read “Sorry for the inconvenience, we are trying to change the world” and “Look back, march forward.”

Thousands of people have rallied in cities across Australia to support women’s rights and show solidarity with those marching elsewhere around the globe.

The largest march was held in Sydney, with thousands gathered in the city’s Hyde Park on Sunday carrying signs with politically charged messages such as “If you’re not angry you’re not paying attention.”

Thousands of people have turned out in central London despite sleet and snow to show solidarity with women around the world in demanding equality, justice and an end to harassment.

Demonstrators chanted across from British Prime Minister Theresa May’s office on Sunday with placards reading “We Are Powerful” and “Time’s Up” to mark the anniversary of U.S. President Donald Trump’s inauguration.

The international events come at a time of reckoning for many men in Hollywood, media and other industries as women speak out about sexual misconduct in the workplace.

In a statement before the London march, activists said they were “coming together to pledge that we are going to make change in big and small ways.”