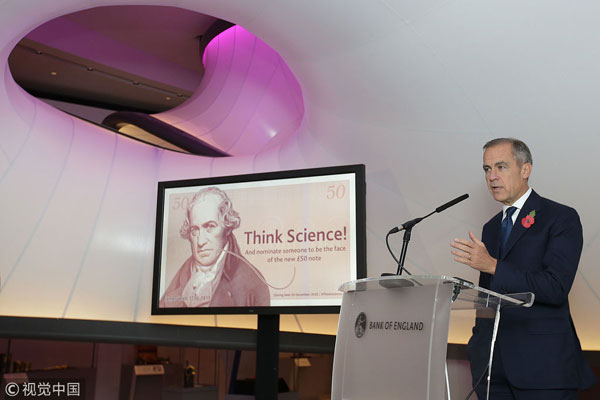 Bank of England Governor Mark Carney speaks during the announcement of the new polymer £50 note, at the Science Museum, Kensington, London. The new £50 note will feature a prominent British scientist, and members of the public are being asked to come up with nominations. (Photo: VCG)

Bank of England governor Mark Carney has announced that the new 50-pound note will feature a prominent British scientist, and the public have been asked for nominations.

The governor, speaking at the British Science Museum in London, said that the polymer note will celebrate UK achievement in science.

Nominations of a late scientist from fields such as biology, astronomy and medical research can be made via Britain's central bank's website over the next six weeks.

Carney will choose from a shortlist next year, the bank said.

The roll-out date is yet to be revealed but it will see the last of the paper notes removed from use.

In addition to the Queen, the existing banknote features engineer James Watt and his business partner Matthew Boulton, who developed and marketed the steam engine in the late 18th century.

There are currently 330 million 50-pound notes in circulation, with a combined value of 16.5 billion pounds ($21.42 billion), the bank said.