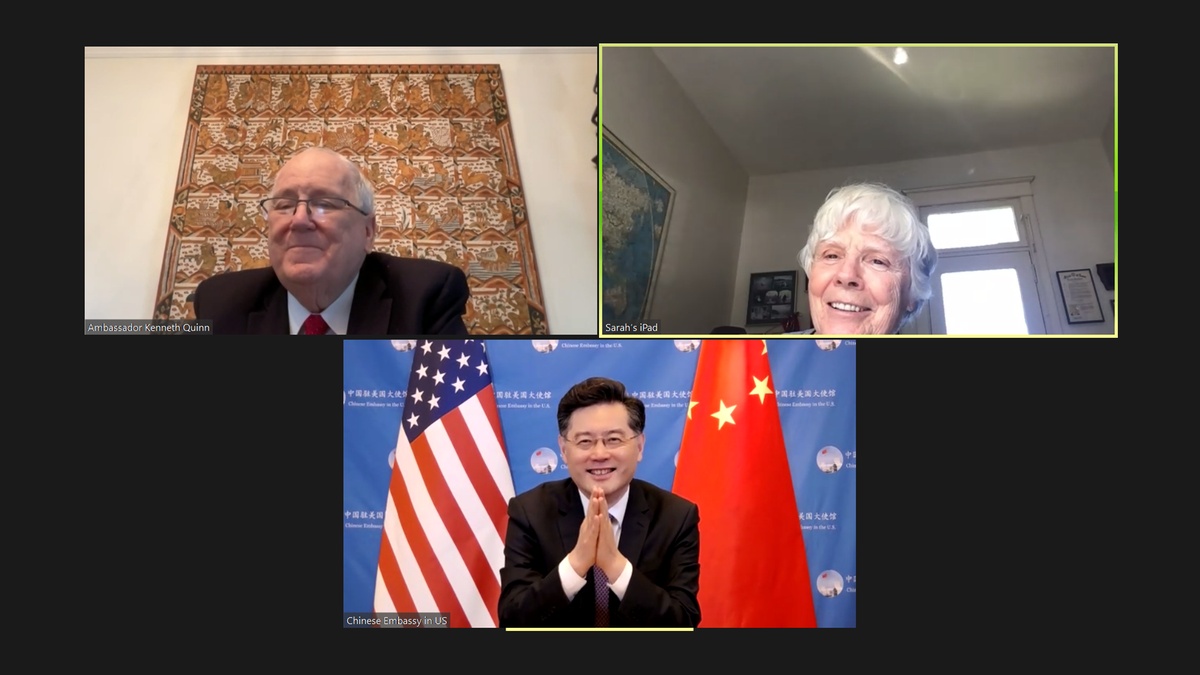 China's Ambassador to the United States Qin Gang holds a virtual meeting with two residents of Iowa, Sarah Lande and Kenneth Quinn on Aug 18, 2021. (Photo: Embassy of the PRC in the US)

China's Ambassador to the United States Qin Gang said Wednesday that he hoped Chinese and American people ramp up exchanges to help dispel the misunderstanding and suspicion undermining bilateral relations.

In what appeared to be his first outreach outside of Washington, the new envoy held a virtual meeting with two residents of Iowa, Sarah Lande and Kenneth Quinn, to convey the "cordial greetings" and "best wishes" from Chinese President Xi Jinping and his wife Professor Peng Liyuan to them and other "old friends" of Iowa.

Lande hosted Xi during his visit in 1985 to Muscatine, Iowa, and Quinn, then president of the World Food Prize Foundation based in Des Moines, Iowa, received Xi, who addressed the US-China Agricultural Symposium at the foundation venue during his 2012 trip to the Midwestern state.

Qin expressed "high appreciation and respect" to them for their long-term commitment to promoting friendly exchanges and subnational cooperation between China and the US, according to a readout from the Chinese embassy.

The ambassador said people-to-people relations underpin state-to-state relations, and he hopes that the two peoples will strengthen friendly exchanges, bridge misunderstanding with friendship, and replace suspicion with trust.

He also expressed wishes to see more fruitful cooperation between China and Iowa.

Lande and Quinn said that the US-China friendship has a profound foundation, and they "greatly" cherish their sincere friendship with President Xi and his wife, according to the statement from the Chinese embassy.

The two said that the stable development of US-China relations meets the common expectation of the two peoples, that the US and China should strengthen cooperation, and that they will continue to make "positive efforts" for the friendship between the two countries.

"I was very impressed with the ambassador reaching out as he did so early in his tenure here to want to speak to people like Sarah Lande and myself out here in the Midwest," Quinn told China Daily on Wednesday night.

Qin arrived in Washington on July 28 to become the 11th Chinese ambassador to the US.

Quinn called the time that Xi visited Iowa in 2012 the high point in the relationship between the US and China, and that "we should strive to return to the state of that relationship as it was in February of 2012".

"I'm very much committed to do everything that I can to help build the relationship and to enhance and improve the friendship we have, because I believe that is very strongly in the best interest of both countries and our peoples," Quinn said.

There have been a lot of "bumps and difficulties" in the bilateral relationship, but the two countries must work together to address three pressing issues: sustainably producing enough nutritious food to feed the 9-10 billion people who will be on the planet within three decades, dealing with climate change, and preventing future pandemics.

"Our planet and humankind cannot meet those challenges unless the United States and China work together to address them," Quinn said.

So whatever other bilateral difficulties there are in the relationship, the two countries should take those issues and raise them above and always work together to take all of the scientific expertise and economic capabilities the two countries have and use them in a collaborative way to address those three problems, he noted.

"There is no reason that we would have to be adversaries," Quinn said when asked to comment on US Secretary of State Antony Blinken's remarks on Monday that it is a common goal for the US and China to realize peaceful coexistence.

"It can only benefit the world, as well as both countries, to find a way to have genuinely friendly relations and collaboration and interaction," Quinn said.