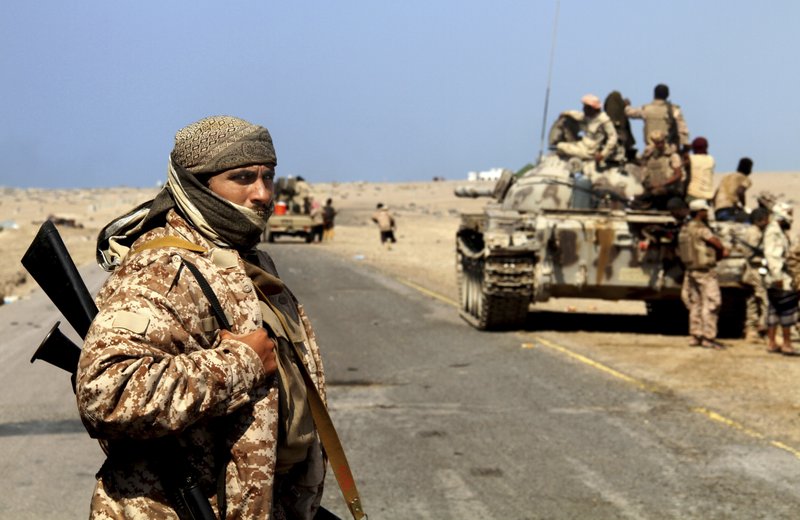 Coalition-backed fighters advance on Yemen's Red Sea port town of Mocha in this January 11 2017. The coalition forces eventually captured the town from Shiite rebels known as Houthis. Some fighters in the unit were openly al-Qaida, wearing Afghan-style garb and carrying weapons with an al-Qaida logo, a sign of how closely the militants have been involved in the war against the Houthis, who are seen by Saudi Arabia and the United Arab Emirates as a proxy for Iranian influence.  (Photo: AP)

"Saudi Arabia increased its presence in Aden by sending an additional batch of troops backed by armored vehicles to the southern city," the local source said on condition of anonymity.

He said that "the convoy of the Saudi forces that arrived from Shabwa province headed directly to the headquarters of the Arab coalition in Aden."

The new Saudi forces will be deployed later to help in stabilizing the situation and securing the state institutions in Aden alongside with the local Yemeni forces, he added.

During the past weeks, elite Saudi troops arrived in Aden to participate in securing the strategic southern city after the power-sharing deal was signed between the Yemeni government and the Southern Transitional Council (STC), according to local officials.

In October, the Saudi-led coalition involved in a war against the Houthis in Yemen announced that its forces have been repositioned in Aden.

The move was made to coordinate military and security operation plans and enhance humanitarian and relief action in Yemen, the coalition said in a statement carried by the Saudi Press Agency.

The move will also strengthen the efforts to secure waterways adjacent to Yemeni coastlines, the statement added.

The impoverished Arab country has been locked in a civil war since late 2014, when the Houthis overran much of the country and seized all northern areas, including the capital Sanaa