Situated at the flood-prone and storm-vulnerable southern tip of Florida, Miami-Dade County has long figured among the US urban areas most at risk from climate change. But when county leaders unveiled a new climate-related resilience plan in 2019, the dangers posed by rising temperatures received only passing mention. 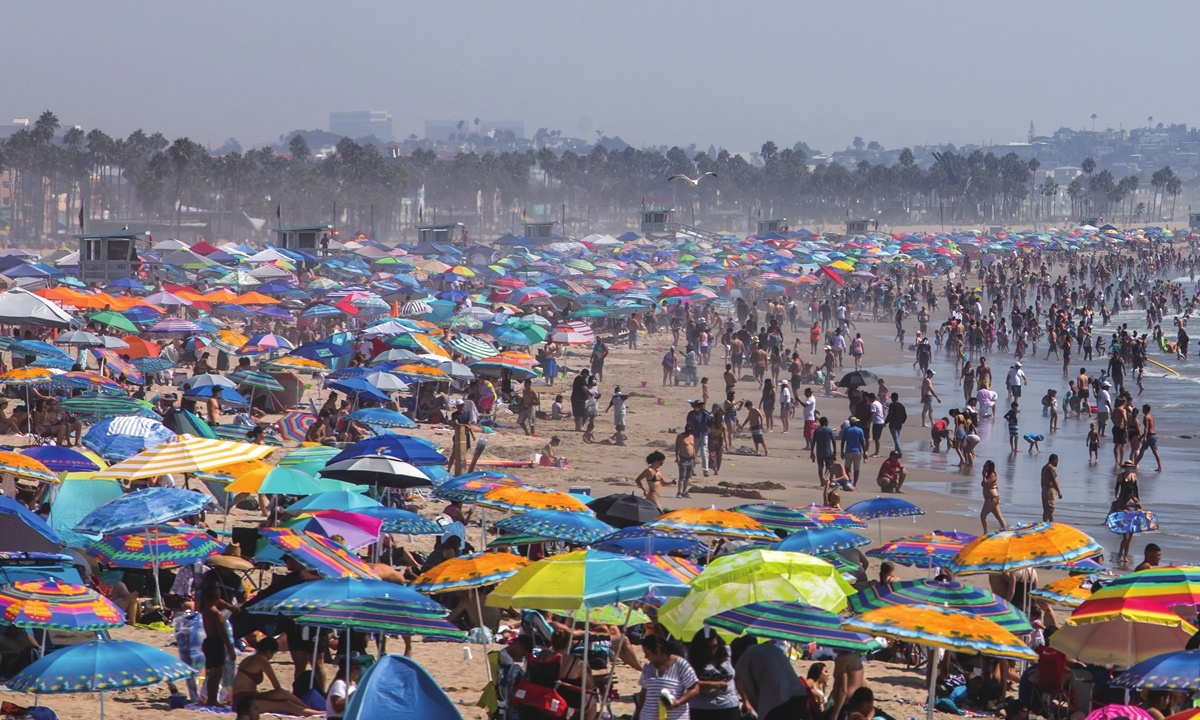 People gather at the beach on the second day of the Labor Day weekend amid a heat wave in Santa Monica, California, the US, on September 6, 2020. (Photo: AFP)

Now the county has made a U-turn, creating the world's first city position tasked specifically with tackling the growing threat of heat.

"We felt like we know how to handle [the] heat here." But in reality, Gilbert and others say Miami is not prepared for rising heat linked to climate change - a position shared by many cities around the world. "Heat kills more people annually than [all] other weather-related disasters combined, though it does not get the same level" of attention, said Evan Mallen, with the Georgia Institute of Technology's Urban Climate Lab.

Gilbert's appointment is one indication that heat threats are starting to be taken "seriously and proactively," he added.

As part of a global initiative launched in August 2020, other cities also plan to name chief heat officers, including Athens in Greece, and Freetown in Sierra Leone.

Gilbert plans to start work in June, just as hurricane season gets underway - timing that isn't coincidental, she said.

After a 2017 hurricane, 14 people died when an area nursing home lost air-conditioning in an extended power outage. That prompted authorities to require such facilities to have a backup power source and three days' fuel, Gilbert said. But in fact, such vulnerability is far more widespread, she told Reuters.

The past decade has been the hottest on record globally, according to the United Nations, and US government researchers said in 2020 that the coming decade is "very likely" to see more of the same.

Already heat waves of longer than 20 days are affecting 30 percent of the world's population, while heat in the workplace could cost $2.4 trillion a year by the end of the decade, according to figures compiled by the Adrienne Arsht-Rockefeller Foundation Resilience Center at the Atlantic Council, a think tank.

Yet even as recognition of other risks from climate change rises among the public and policymakers, heat lacks similar attention, said Kathy Baughman McLeod, the center's director.

Heat deaths often occur behind closed doors, with little media coverage, and "people just don't have awareness of it - that's why they call it the silent killer," she said.

The Arsht-Rockefeller center, which is helping support Gilbert's position in Miami, is spearheading a broader campaign to create public recognition of a "heat season," in parallel to hurricane or wildfire seasons.

One proposal to raise awareness includes starting to name and categorize heat waves, as is now done with major storms.

From a climate perspective, heat is both a shock and a stress, Baughman McLeod said, pointing to immediate problems such as with infrastructure - train tracks bending, planes being unable to fly - as well as longer-term social pressures.

"When you can't sleep because it's too hot, people wake up and make mistakes at work" and students can't learn as well, she said, calling heat a growing health crisis.

"So you see injuries and deaths on the job, and it's not categorized as such. We're missing a lot of data."

And while hot places like Miami, Phoenix, and Los Angeles are increasingly focusing on the issue, Baughman McLeod and others warned that cities in typically colder climates are less prepared.

In the northern state of Michigan, for example, "structures are not well-adapted for heat - we built them for cold. But our world will be changing," said Patricia Koman, a research investigator at the University of Michigan School of Public Health.

After being approached by community groups, Koman and colleagues in 2019 created publicly available tools to map heat-stress vulnerability in the state. The project showed inequalities in heat exposure between minority and majority-white communities, as well as along economic lines, she said.

"Heat is already an issue for many Michigan cities, especially for vulnerable groups," including the elderly, pregnant women, those with underlying health conditions, outdoor workers, and children, Koman said. But most local officials in Michigan are not yet ready to address the growing threat, she added.

A 2019 survey she did found just 35 percent of local public health officials said climate change was a priority for their departments. A similar number said they did not know whether heat was a problem.

Help for most at risk

In Miami, finding those strategies and spreading them across various branches of the county government will be Gilbert's daily focus.

That includes higher average night-time temperatures, which can be especially dangerous as they do not offer the typical relief, she said.

Her work will look at equity issues - such as for residents of substandard housing - and efforts to build public recognition of heat dangers so neighbors will, for instance, think to check on elderly community members when temperatures rise.

A first step will be convening a task force of health workers, weather experts, emergency managers, and others to figure out where data gaps exist, she said.

Interventions could then include planting trees, making pavements and roofs lighter colored, and retrofitting homes.

The task force also could aim to encourage strong employer policies on heat risks for workers, set thresholds for dangerous temperatures, and require residential windows to have screens that can be opened for ventilation without letting in insects.

Gilbert said the work in Miami could serve as a blueprint for other cities. "The idea is to have a person who wakes up every day to think about the heat risk," she said.