WORLD New clashes break out in Nagorno-Karabakh after Washington talks

New clashes break out in Nagorno-Karabakh after Washington talks

New clashes broke out between Azerbaijan and ethnic Armenian forces over Nagorno-Karabakh a day after talks in Washington, D.C., US in efforts to end the deadliest fighting in the enclave in more than a quarter of a century. A man enters a basement shelter in the city of Stepanakert during the ongoing fighting between Armenian and Azerbaijani forces over the breakaway region of Nagorno-Karabakh, October 23, 2020. /AFP

Azerbaijan's defense ministry reported fighting in and around Nagorno-Karabakh, a mountainous part of Azerbaijan populated and controlled by ethnic Armenians. It said the areas of Lachin and Gubadli had come under rocket and artillery fire from inside Armenian territory.

In Nagorno-Karabakh, local officials accused Azerbaijan's forces of firing Smerch missiles into residential buildings in Stepanakert, the largest city in the region, which Baku denied.

US Secretary of State Mike Pompeo had separately met with the foreign ministers of Azerbaijan and Armenia on Friday in a new attempt to end nearly a month of bloodshed that Russian President Vladimir Putin said may have killed 5,000 people. Armenian Foreign Minister Zohrab Mnatsakanyan (left) meets with US Secretary of State Mike Pompeo to discuss the conflict in Nagorno-Karabakh, in Washington, D.C., US, October 23, 2020. /AFP

The collapse of two Russia-brokered ceasefires had already dimmed the prospect of a quick end to the fighting that broke out on September 27 over Nagorno-Karabakh.

The defense ministry of Nagorno-Karabakh said the total number of Armenians killed in the weeks of fighting had risen by 36 to 963, the Russian news agency Interfax reported.

Azerbaijan said a 13-year-old Russian boy died on Saturday after being wounded in a rocket attack on the city of Ganja on October 17. Azerbaijan says 65 Azeri civilians have been killed and 298 wounded, but has not disclosed its military casualties.

Azeri forces say they have made territorial gains, including full control over the border with Iran, which Armenia denies. Nagorno-Karabakh's ethnic Armenian administration says its forces have repulsed attacks. 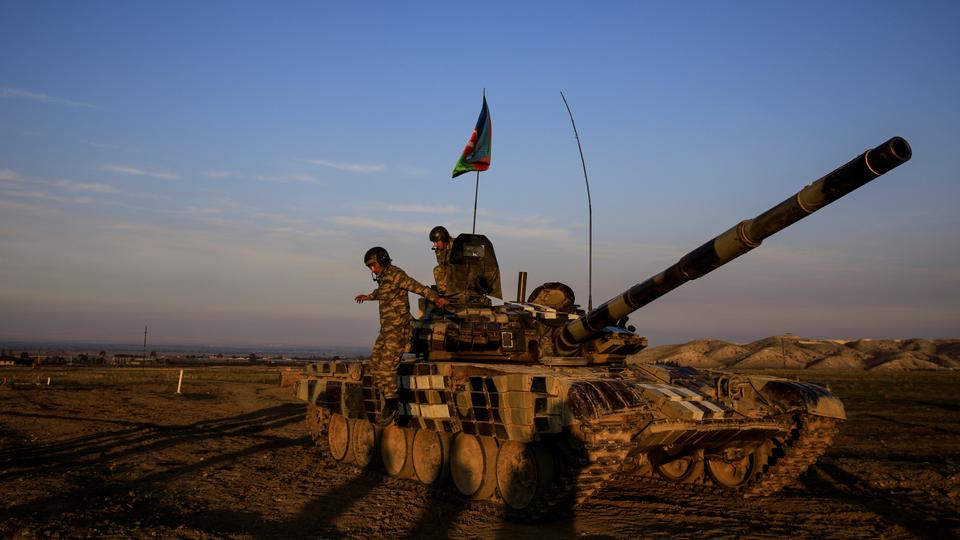 Azerbaijani soldiers at a military training and deployment center near the city of Ganja, Azerbaijan, October 23, 2020. /Reuters

World powers want to prevent a wider war that draws in Turkey, which has voiced strong support for Azerbaijan, and Russia, which has a defense pact with Armenia.

Differences over the conflict have further strained relations between Ankara and its NATO allies, with Pompeo accusing Turkey of fueling the conflict by arming the Azeri side. Ankara denies it has inflamed the conflict.

Pompeo had said ahead of Friday's talks that he hoped the "right path forward" could be found.

But Armenian Prime Minister Nikol Pashinyan said he saw no diplomatic resolution of the conflict at this stage, and Aliyev has described the prospects of a peace settlement as "very remote."

About 30,000 people were killed in a 1991-94 war over Nagorno-Karabakh. Armenians regard the enclave as part of their historic homeland; Azeris consider it an illegally occupied land that must be returned to their control.