BOGOTA, Colombia (AP) — Colombia's youngest elected president was sworn in to office Tuesday, promising to "make corrections" to a peace deal with leftist rebels that has divided the country and to crack down on lingering armed groups still roaming the countryside. 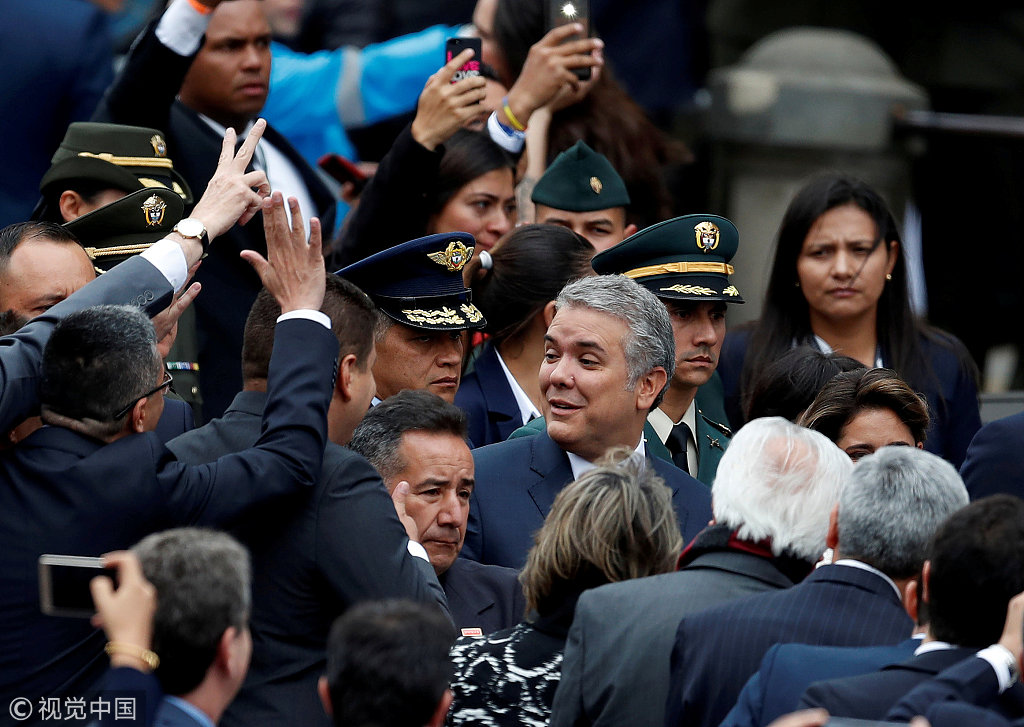 Ivan Duque, the 42-year-old protege of a powerful right-wing former president, now faces the task of implementing the historic accord with the Revolutionary Armed Forces of Colombia that ended a half century bloody conflict, but which remains on shaky ground. He will also have to deal with burgeoning coca and cocaine production that has strained relations with key ally Washington and negotiate a peace with a holdout guerrilla army.

"The moment has come for all of us to unite to fight against illegal groups," Duque said in his inauguration speech to more than a dozen heads of state, promising to get tough on crime, drug trafficking groups and other armed and rebel groups. 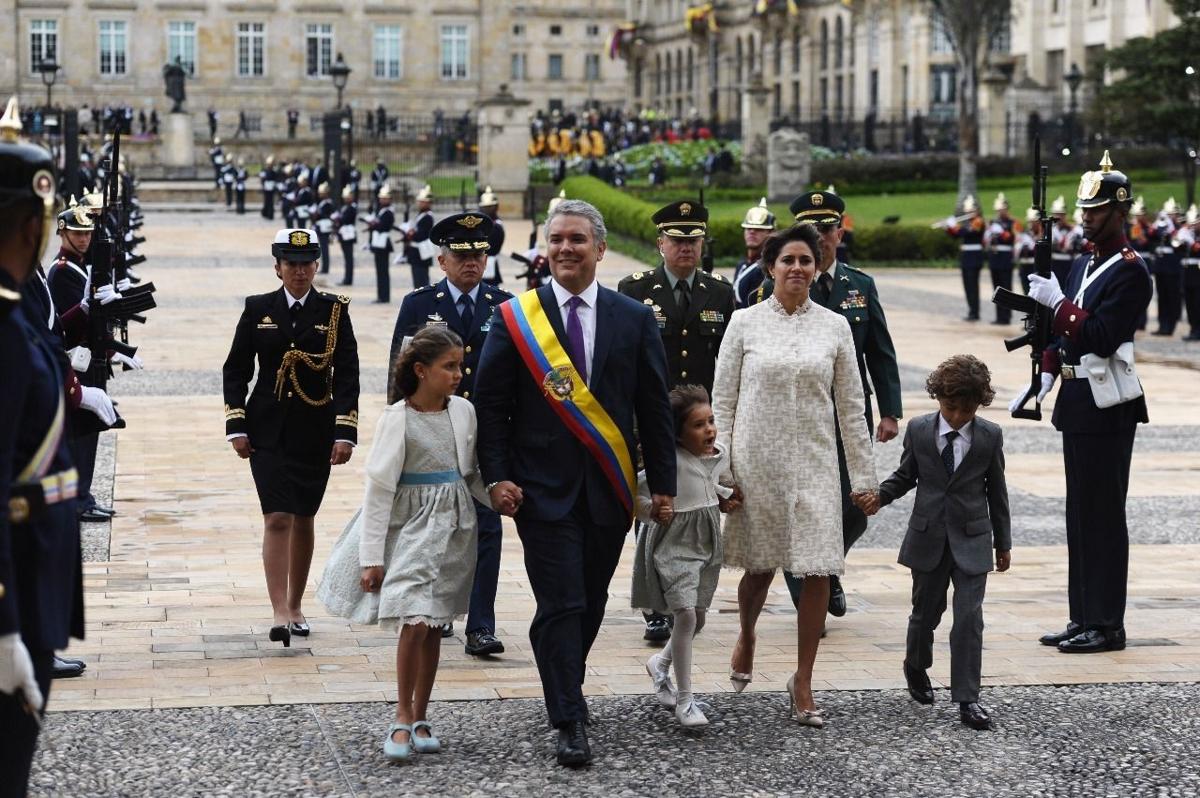 The new president said he believed in "the demobilization, disarmament and reinsertion of the guerrilla base" into society under the accord with the FARC. But he added that "we will make corrections to ensure that the victims receive truth, proportional justice, reparations and not a repetition" after a conflict that left at least 260,000 dead, some 60,000 missing and millions displaced.

In another nod to conservatives who have demanded tougher negotiation terms with rebel groups, Duque said he will push for a constitutional reform that makes it impossible for the government to grant amnesty to individuals who have been involved in drug trafficking and kidnappings. 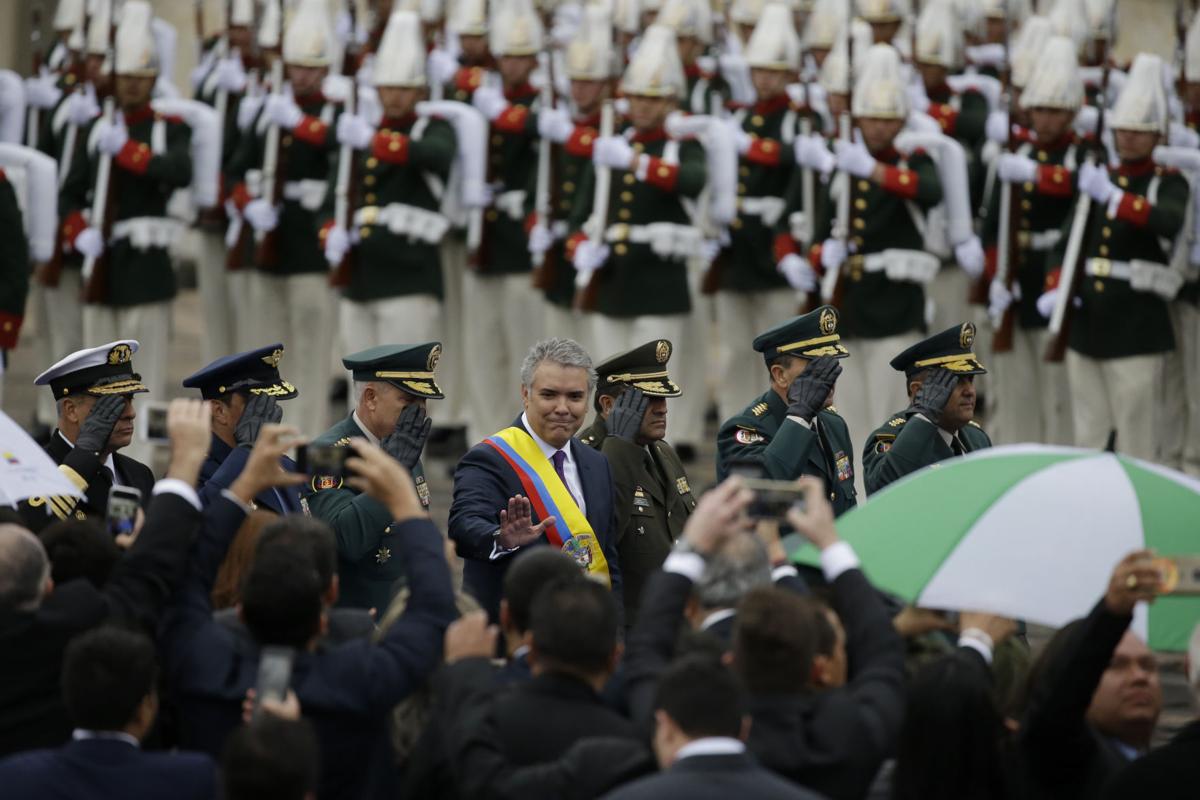 Colombia's newly sworn-in President Ivan Duque waves as he reviews the honor guard during his inauguration ceremony in Bogota, Colombia, Tuesday, Aug. 7, 2018. The young protégé of a powerful former president was sworn in as Colombia’s new leader Tuesday, tasked with guiding the implementation of a peace accord with leftist rebels that remains on shaky ground. (Photos: AP)

Duque will have to lead peace negotiations with the National Liberation Army, a guerrilla army of some 2,000 fighters that began talks with Duque's predecessor, Juan Manuel Santos. He said the talks with the ELN will hinge on whether the group ceases its attacks on Colombia's military and accepts international monitoring.

"We have to construct a culture that respects the rule of law," Duque said as he spoke on a large blue stage on Bogota's largest public square.

Duque's detractors fear he will be little more than a puppet for Alvaro Uribe, the ex-president who led a referendum defeat of the initial version of a peace accord with the FARC rebels. Uribe is still backed by millions of Colombians, though he is perhaps equally detested by legions who decry human rights abuses during his administration. 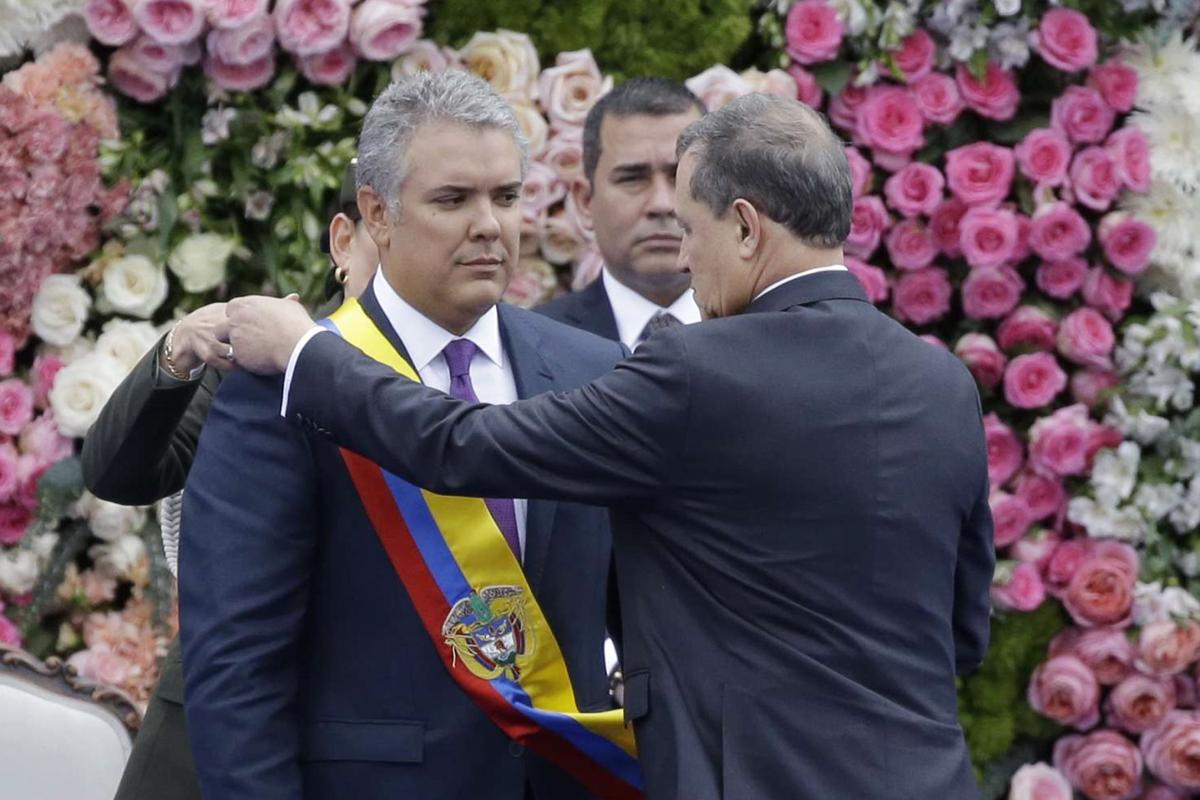 On Tuesday, hours before the inauguration ceremony, thousands gathered at public squares in Bogota and a dozen more cities across Colombia to express their opposition to Duque. At the rallies, protesters bore white flags and signs that called for the preservation of the peace deal.

"We are ready for dialogue," said opposition Sen. Ivan Cepeda, one of Duque's and Uribe's fiercest critics. "But we are also ready to mobilize and exert our opposition if he enacts policies that limit peoples' rights." 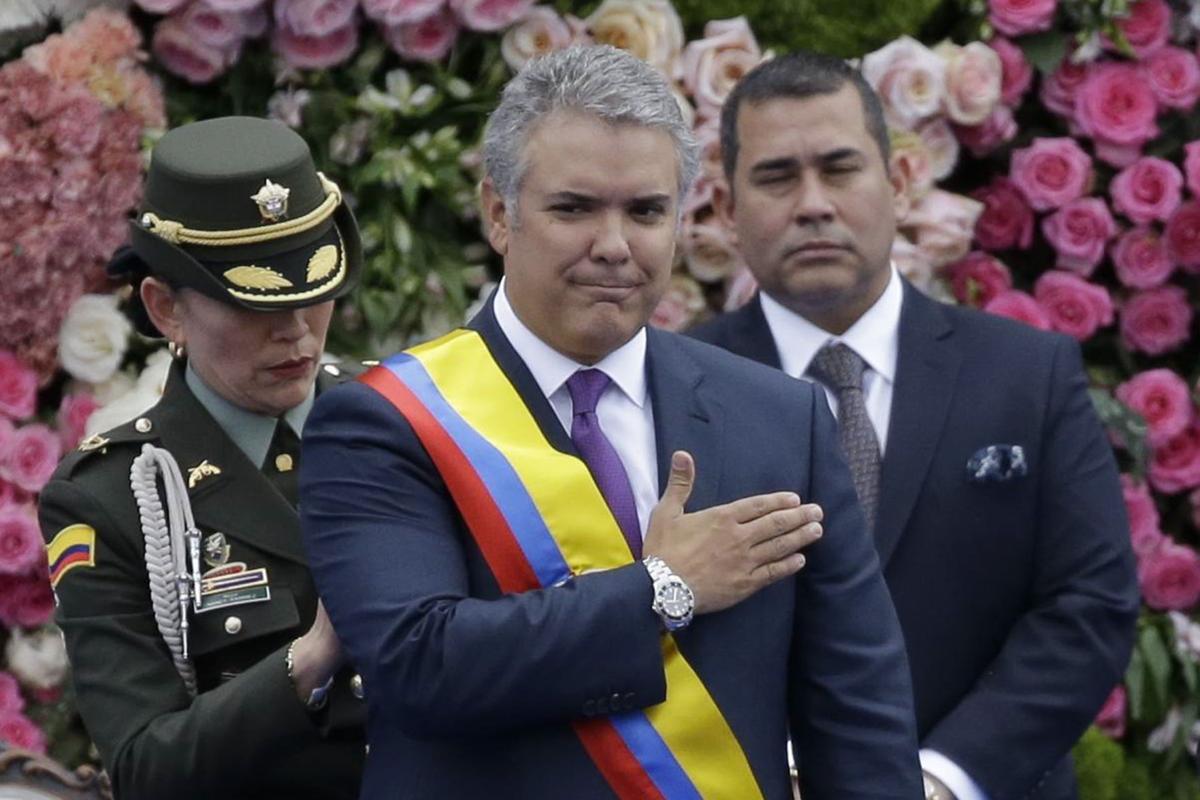 Duque is taking office as a spate of attacks and the killings of social activists have underlined that peace remains a relative term.

On Monday night, a motorcycle bomb exploded outside a police station in the western province of Cauca. The National Liberation Army, a smaller guerrilla group that is still in peace talks, last week kidnapped three policemen and a soldier in an attack that highlighted the government's struggle to bring law and order to Colombia's most remote areas.

"If Duque is not able to solve this problem and find a way to bring the state into the countryside, we're going to keep having the same problems we've had for decades," said Jorge Gallego, a professor at Colombia's Rosario University.

The new president has promised a harder line against drug trafficking that includes bringing back the aerial fumigation of coca crops, a policy that was stopped by Santos' administration three years ago over health concerns, but is supported by the US government. Cocaine production has doubled in Colombia over the past two years, according to US government estimates.

Duque has undergone a quick transformation from unknown technocrat to president of South America's second most populous nation, thanks in large part to the support of Uribe.

Just four years ago, Duque was a Washington suburbanite with a job at an international development bank. It was there that he developed close ties to Uribe, assisting the former president when he taught a course at Georgetown University. In 2014, Uribe propelled Duque into the political limelight when he encouraged him to return to Colombia to run for a Senate seat and placed him on a list of newcomer candidates that he urged his multitude of supporters to elect. 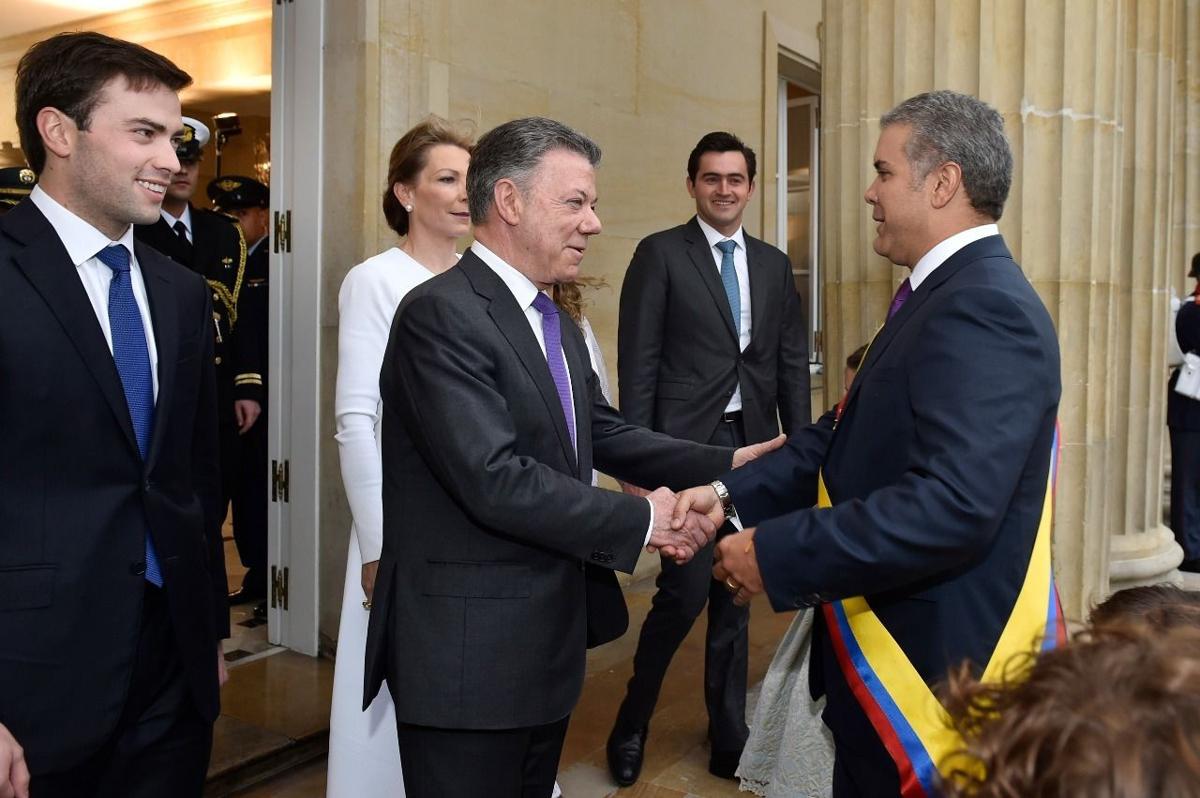 Within Uribe's conservative Democratic Center party, Duque's reputation as a more moderate voice can at times put him at odds with the solidly right-wing faction. Uribe's support is thus considered crucial for Duque to rule with the full backing of his party. But he will need to build a broader alliance to pass laws in Congress.

In the weeks since his easy victory over leftist ex-guerrilla Gustavo Petro, Duque has signaled both his loyalty to Uribe and a conviction to chart his own path. While many of his Cabinet picks have ties to Uribe, there are also a number with no links to a traditional political party.

"So far I think he has shown more independence than some sectors believed," Gallego said. "Treating Duque as a puppet of Uribe is a very simplistic way of analyzing things."