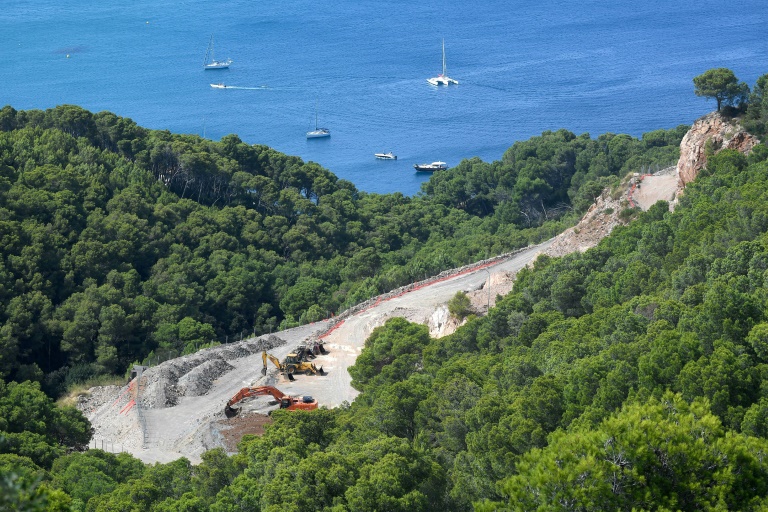 The picturesque coastline near the village of Pals where the mayor is poised to give the green light for the construction of 1,000 homes in a centuries-old pine forest. (Photo: AFP)

Sandwiched between the crystalline blue sea and green pine trees lies Aiguafreda, one of Spain's last largely unspoiled Mediterranean coves, which is threatened by a new building frenzy.

From Catalonia to the Balearic Islands numerous building projects which came to a halt during Spain's 2008 economic crisis have been restarted as growth returns, raising fears among green groups of a new "construction fever" along the country's already heavily built-up coastline.

On the Costa Brava, a nearly 100-mile (160-kilometre) stretch of rugged coastline in northeastern Catalonia, some 20 projects are in the works, according to environmental group SOS Costa Brava.

Among them is a 260-home residential development at Aiguafreda which had been stalled for 15 years due to bureaucratic hold-ups, divisions among investors and then the economic crisis, which was sparked by the collapse of a decade-long property bubble. The project was relaunched by new owners recently.

Only a few houses nestled among pine trees currently surround the tiny cove of crystal clear waters, in the municipality of Begur.

"There are very few places left like this, that are so green and with so few houses. The idea of losing it terrifies us," Estel Rumbau of lobby group Save Aiguafreda told AFP.

The municipality says it is impossible to stop the project since the land where it will be built has already been zoned as residential. Expropriating it would cost 50-70 million euros ($60-81 million) -- money the municipality does not have.

"I would like to build zero homes, but our hands are tied. We will try to ensure that they are as little as possible," Begur mayor Joan Manel Loureiro told AFP, vowing that no more than 100 homes will be built.

It is not the only project in Begur. On the other side of a hill overlooking the Aiguafreda cove six excavators are preparing land to build 26 luxury apartments with sweeping views of the Medes Islands, a protected area.

About 60 apartments are also planned for the neighbouring Sa Riera cove. And in the adjoining municipality of Pals the mayor is poised to give the green light for the construction of a thousand homes in a centuries-old pine forest.

In the picturesque fishing port of Cadaques further up the Costa Brava where surrealist Spanish painter Salvador Dali once lived, a hotel and about 100 homes will be built near a nature park.

Local residents in Begur complain the area is already saturated in summer, with cars jamming the small road leading to its tiny coves.

The municipality, which is home to 4,000 people, sees its population swell to over 20,000 during the peak holiday months.

Similar projects are springing up everywhere along the coast of Spain, which surpassed the United States last year to become the world's second most visited country after France.

Greenpeace has sounded the alarm over the construction of a hotel at a protected beach at El Palmar near the southwestern city of Cadiz and two 30-storey towers in Roquetas de Mar near Almeria in the southeast.

"There is a renaissance in construction," said Pilar Marcos, one of the authors of a Greenpeace report on the building frenzy on the Spanish coast published in July.

The amount of coastal land that has been built on in Spain has more than doubled since 1988, with some areas already 90 percent built-up, according to the report.

A symbol of this building excess -- the 21-storey complex on the Algarrobico beach in the Cabo de Gata natural park in Almeria which never opened to the public -- remains standing despite a ruling from Spain's Supreme Court that it be torn down.

"We are falling into the same trap," said Marcos, who called on Spain's new Socialist government to adopt a stricter law against building on the coast.