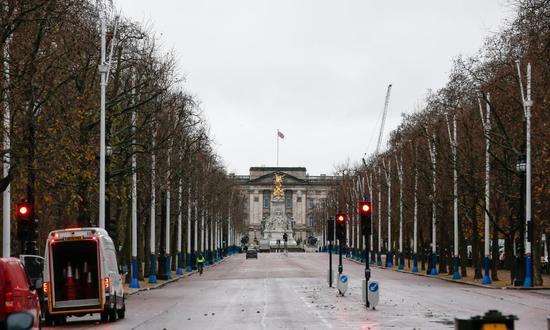 For Britons, Europeans and perhaps a significant number of people around the world, the coming Christmas holiday is like no other -- a "coronavirus Christmas" when people will be largely grounded indoors as they are bracing themselves for a challenging time together.

A highly infectious new strain of the coronavirus recently reported in Britain has sounded fresh alarm on COVID-19 which has infected more than 77 million people and caused over 1.7 million deaths worldwide.

The new variant has sent Britons particularly on another "rollercoaster" ride of their emotions as the planned relaxation of coronavirus rules for Christmas was replaced by yet tougher new measures rolled out Saturday.

Countries have followed suit to announce plans to ban flights from Britain over concerns about a further spread of the new virus strain in this grave battle between virus and vaccines.

British Health Secretary Matt Hancock on Sunday warned that a new strain of COVID-19 is "out of control" in Britain.

"It is going to be very difficult to keep it under control until we have the vaccine rolled out," he said. "We know with this new variant you can catch it more easily from a small amount of the virus being present.

The British government's Chief Scientific Adviser Patrick Vallance has said the new variant was first seen in mid-September in London and Kent.

By December, the new variant had become the "dominant variant" in London, and by the week ending Dec. 9, it had accounted for 62 percent of cases in London, 59 percent of those in eastern England, and 43 percent in the south-east, according to Vallance.

"New variant may be up to 70 percent more transmissible," he told a Downing Street virtual press conference, adding the spread is being driven by the new variant of the virus.