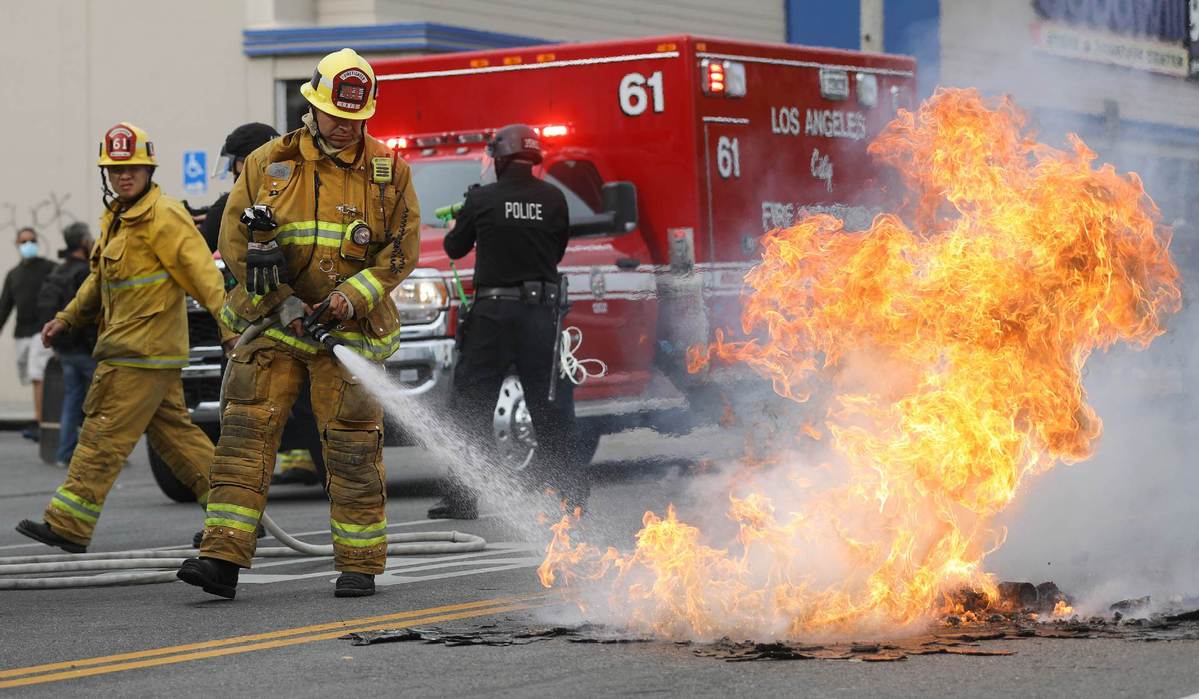 LAFD firefighter extinguishes a small street fire during demonstrations following the death of George Floyd on May 30, 2020 in Los Angeles, California. (Photo: Agencies)

LOS ANGELES - Los Angeles declared another curfew effective local time 8:00 pm Sunday to 5:30 am Monday as the second largest city in the United States braced for another day of unrest and potentially violent protests sparked by death of George Floyd in Minneapolis.

Los Angeles Mayor Eric Garcetti announced the order at a press conference Sunday noon after a night of looting and vandalism in the city's downtown and shopping streets.

Other cities in Southern California, including Santa Ana, Culver City and West Hollywood, which joined Los Angeles in proclaiming an overnight curfew on Saturday, also extended the curfew to local time 5:30 am Monday.

Police continued to arrest people who were looting stores or were on the streets in violation of a city curfew early Sunday morning and hundreds of the members of California National Guard were deployed overnight in Los Angeles downtown to restore the order.

California governor Gavin Newsom declared a state of emergency in Los Angeles County on Saturday night to cope with the unrest, which, with a population of more than 10 million population, is the most populous county in the United States.

The document signed by Newsom attributed the Los Angeles protests to a response to the death of George Floyd.

"On May 25, 2020, George Floyd tragically died in Minneapolis, Minnesota, shortly following his arrest in which an officer of the Minneapolis Police Department kneeled on his neck to detain him during the arrest, and then did not respond to Mr. Floyd's requests for help when he stated that he could not breathe," the document read.

The Consulate General of China in Los Angeles issued a note to Chinese citizens living in the area, reminding them to follow curfew imposed by local authority and skip places where the protests and riots erupted.