New drone sightings Friday caused fresh chaos for holiday travelers at London's Gatwick Airport, which reopened in the morning after a 36-hour shutdown only to hastily suspend flights for more than an hour in the late afternoon on one of the busiest travel days of the year.

A woman waits in the departures area at Gatwick airport, near London, as the airport remains closed with incoming flights delayed or diverted to other airports, after drones were spotted over the airfield last night and this morning, Thursday, Dec. 20, 2018.[Photo: AP/Tim Ireland]

The reopening, closing and re-reopening of Britain's second-busiest airport due to repeated drone sightings raised a host of questions for British officials. Those included how safe is it really to fly with drones around and why can't the country's police, military and aviation experts catch those responsible since they have been investigating the drone invasions since Wednesday night. 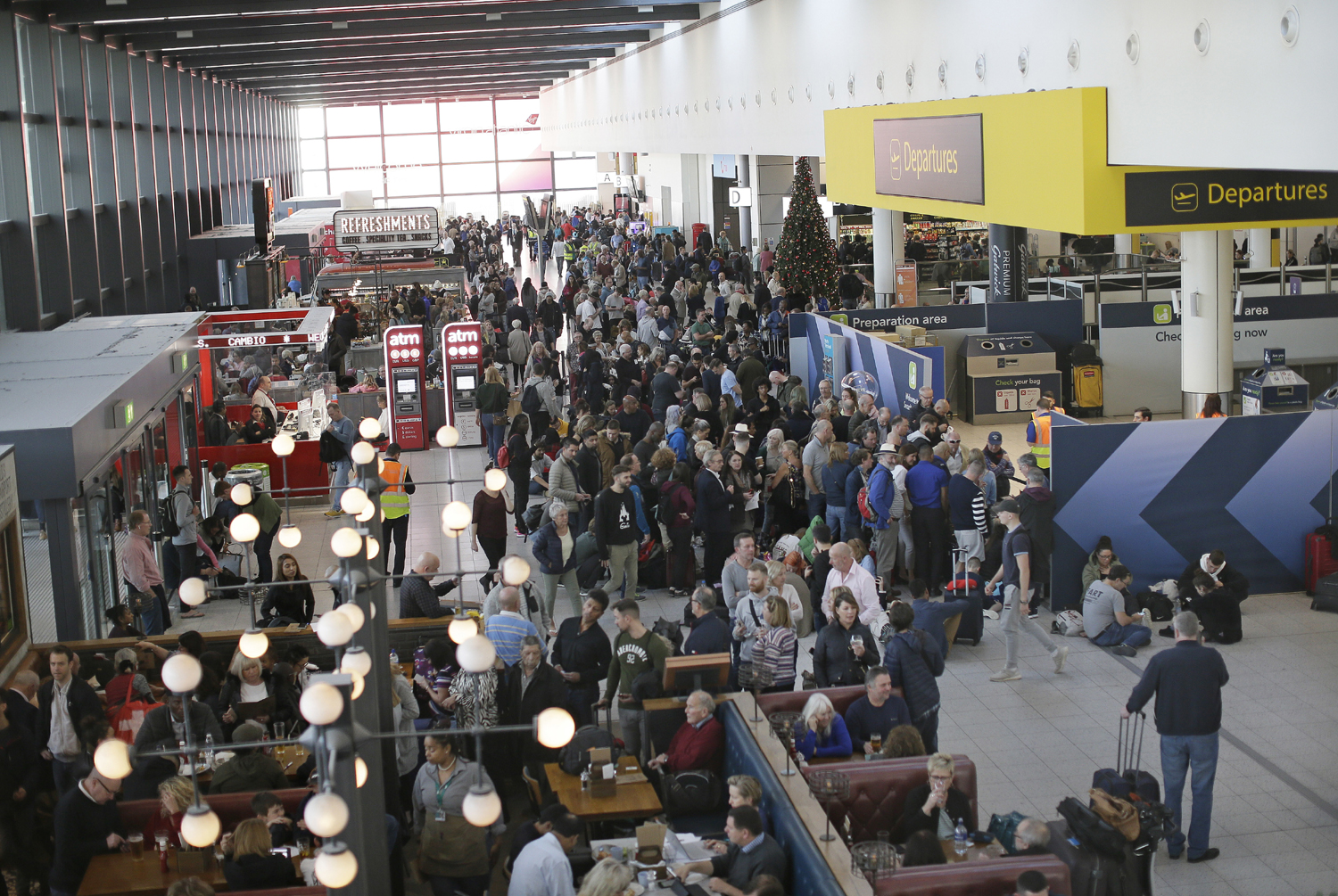 People wait near the departures gate at Gatwick airport, near London, as the airport remains closed with incoming flights delayed or diverted to other airports, after drones were spotted over the airfield last night and this morning, Thursday, Dec. 20, 2018. [Photo: AP/Tim Ireland]

The Friday night flight suspension at Gatwick caused still more delays and cancellations just as the holiday travel season peaked. Tens of thousands of travelers have been stranded or delayed due to the persistent drone crisis at Gatwick, located 30 miles (45 kilometers) south of London.

The latest drone sighting came after British police and transport officials said extra measures had been put in place to prevent drones from intruding on the airport, which serves 43 million passengers a year.

Military forces with special equipment have been brought in and police units are working around-the-clock, but the culprit or culprits have not been found. Police say a sophisticated drone operation is targeting the airport to cause maximum disruption during the holiday rush.

The motive for the drone invasion wasn't clear but British police said there are no indications it was "terror related." 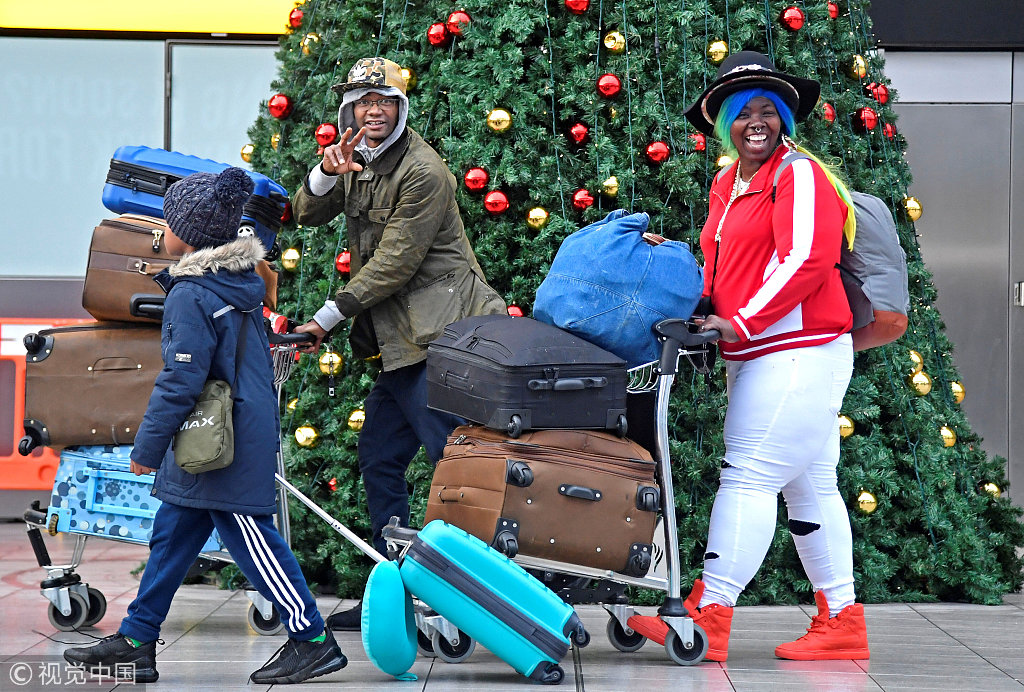 Passengers walk through the South Terminal building at Gatwick Airport, after the airport reopened to flights following its forced closure because of drone activity, in Gatwick, Britain, December 21, 2018. [Photo: VCG]

Gatwick reopened at about 6 a.m. Friday after having been shut down Wednesday night and all day Thursday after authorities said drones repeatedly violated the airport perimeter, threatening the safely of incoming and outgoing planes.

Transport Secretary Chris Grayling said Friday morning there had been about 40 sightings of "a small number of drones" while the airport was shut down. He told the BBC that the drone disruption at Gatwick was "unprecedented anywhere in the world."

Grayling said additional "military capabilities" and a range of security measures had been put in place overnight but would not elaborate. He said the airport was considered safe for flights Friday even though the drone operator or operators had not been apprehended.

The Thursday shutdown upended the travel plans of tens of thousands of passengers, since about 110,000 people had been scheduled to pass through Gatwick that day.

After flight operations restarted Friday, the airport struggled to resolve a massive backlog of passengers and cancelled, delayed or diverted flights. The number of passengers expected Friday was even higher than the previous day, and about 145 of Friday's 837 scheduled flights at Gatwick were cancelled to handle the crush.

Then, in a shock, Gatwick takeoffs and landings had to be suspended again as a "precaution" after reports that a drone was spotted about 5:10 p.m., the airport said.

Planes circled over London or sat at Gatwick gates, waiting to find out what would happen Friday night, before getting a new "all-clear" about 80 minutes later.

"The military measures we have in place at the airport have provided us with reassurance necessary to reopen our airfield," the airport tweeted moments after flights resumed.

An aircraft comes in to land as the runway is reopened at Gatwick Airport on December 21, 2018 in London, England. Authorities at Gatwick have reopened the runway after drones were spotted over the airport on the night of December 19. The shutdown sparked a succession of delays and diversions in the run up to the Christmas getaway, in what authorities have called a 'deliberate act' to disrupt the airport. Police continue their search for the drone operators responsible. [Photo: VCG]

The hundreds of travelers who were stuck overnight at Gatwick by Thursday's closure described freezing conditions as they slept on benches or the airport floor. Many complained they weren't being kept informed about re-routed flights.

British officials, meanwhile, were debating whether shooting down a drone was an available "tactical option" due to concerns that such an action could inadvertently hurt people on the ground.

"Shooting the drone out of the sky is probably one of the least effective options" available, said Assistant Chief Constable Steve Barry of Sussex Police.

He said police believe there was more than one drone operating around Gatwick in the last two days and that it was possible the drones were being operated from fairly far away.