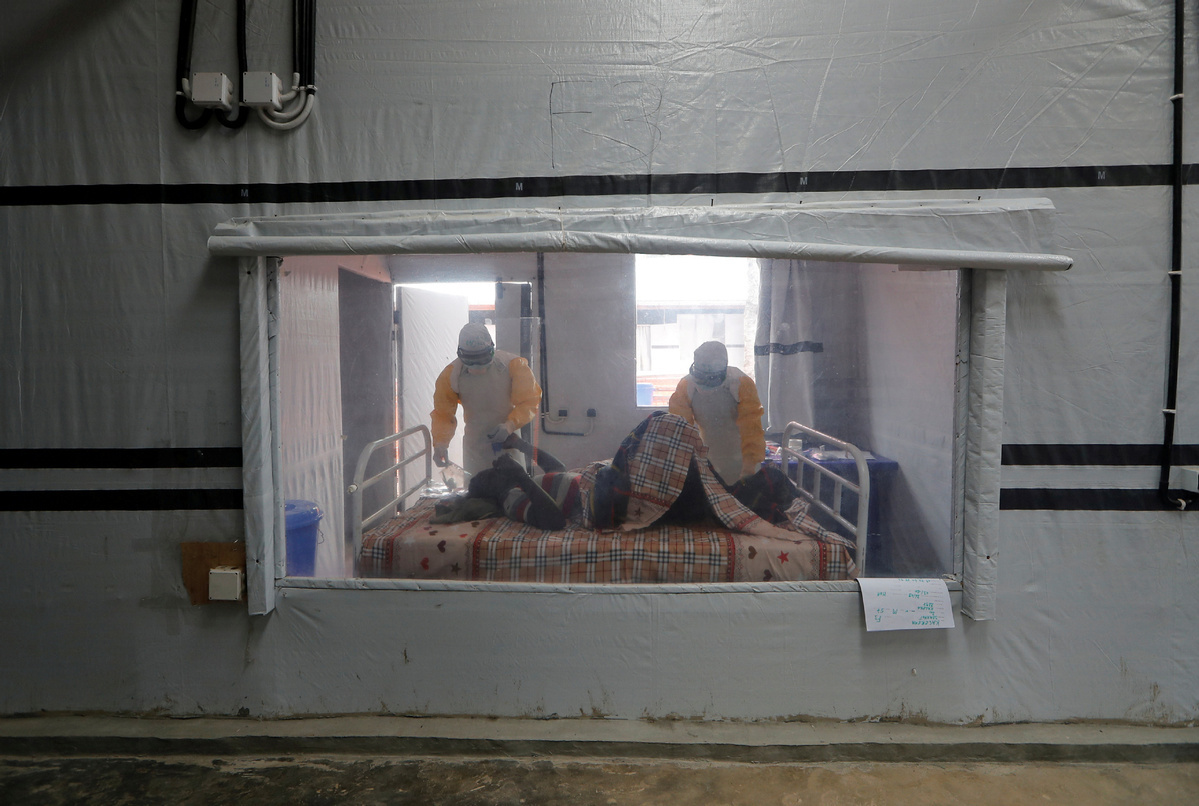 FILE PHOTO: Moise Vaghemi, 33, (L) an Ebola survivor who works as a nurse cares for a patient who is suspected to be suffering from Ebola, inside the Biosecure Emergency Care Unit (CUBE) at the Ebola treatment centre in Katwa, near Butembo, in the Democratic Republic of Congo, October 3, 2019. (Photo: Agencies)

The Democratic Republic of Congo or DR Congo on Monday announced a new outbreak of Ebola virus disease in the Wangata health zone of Mbandaka, the capital of Équateur province in the northwestern part of the country.

According to the United Nations Children's Fund or UNICEF, the new outbreak has already killed five people, including a 15-year-old girl. The deaths occurred between May 18 and 30.

Four additional people who contracted the virus and all had contact with the deceased, including the child of one of the fatal cases, are being treated in an isolation unit at Wangata Hospital in Mbandaka, the UN agency said.

The resurfacing of Ebola in Équateur comes just as DR Congo was approaching the end of the current outbreak in the eastern part of the country, which has killed 2,134 people and infected 3,317.

This was the second time the country's plan to announce the end of the epidemic was disrupted by a new outbreak.

In April 10, just two days before the country was due to announce the end of the Ebola outbreak, the government confirmed the death of a 26-year old man due to Ebola in Beni, in eastern DR Congo.

The current outbreak adds to the country's distress, as it's also battling the world's largest measles outbreak that has killed over 6,000 since December 2018, and the coronavirus, which has so far infected 3,195 in the country and killed 72.

"This is a reminder that coronavirus is not the only health threat people face," said Dr. Tedros Ghebreyesus, director-general of the World Health Organization.

"Although much of our attention is on the pandemic, WHO is continuing to monitor and respond to many other health emergencies."

The new cases mark the country's 11th outbreak of Ebola since the virus was first discovered in the country in 1976. The city of Mbandaka and its surrounding area were the site of DR Congo's ninth Ebola outbreak, which took place from May to July 2018.

"It's happening at a challenging time, but WHO has worked over the last two years with health authorities, Africa CDC and other partners to strengthen national capacity to respond to outbreaks," said Dr. Matshidiso Moeti, WHO regional director for Africa.

"To reinforce local leadership, WHO plans to send a team to support scaling up the response. Given the proximity of this new outbreak to busy transport routes and vulnerable neighboring countries, we must act quickly."

WHO is already on the ground in Mbandaka supporting the response to the outbreak, as part of capacity built during the 2018 outbreak.

The team supported the collection and testing of samples, and the us of the national laboratory for confirmation.

"Contact tracing is underway. Work is ongoing to send additional supplies from North Kivu and from Kinshasa to support the government-led response. WHO is also working to ensure essential health services are provided to communities despite these emergency events," the UN agency said.

Edouard Beigbeder, UNICEF representative in DR Congo, said the agency is working alongside the government and all partners in the response to the Ebola epidemic by providing essential equipment, deploying community mobilizers, providing water and sanitation services, as well as supporting orphans and other affected children.

"In the ongoing outbreak in DR Congo, more children, proportionately, are being affected than in any previous Ebola outbreak, so we must ensure preventing infection among children is central to the response in Équateur," Beigbeder said.