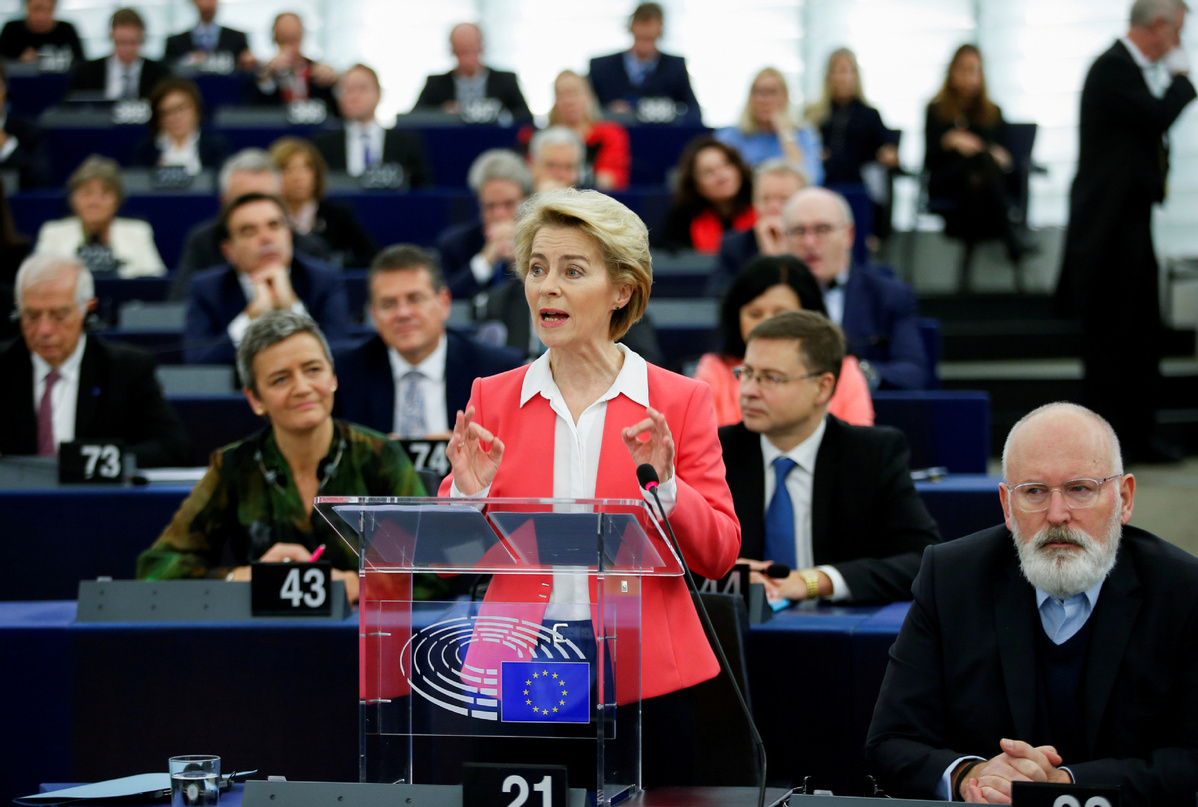 Backed by her team of commissioners, Ursula von der Leyen will take office as the new president of the European Commission on Sunday.

Von der Leyen won approval from the European Parliament on Wednesday by a vote of 461 to 157, with 89 abstentions.

The 61-year-old former German defense minister told the Parliament members, or MEPs, that during her five-year term, she will lead the European Union in a transformation that will touch every part of its society and economy. "And we will do it because it is the right thing to do. Not because it will be easy," she said.

Without elaborating, she added: "This is an unsettled world, where too many powers only speak the language of confrontation and unilateralism..... The world needs our leadership more than ever, to keep engaging with the world as a responsible power. To be a force for peace and for positive change."

Foreign Ministry spokesman Geng Shuang said on Thursday that the Chinese government has consistently valued greatly its ties with the EU, as well as the status and role of the commission.

He said that China has always supported the integration of Europe, and hopes the EU will remain united, stable, open and prosperous.

Geng called for the EU to work with China to deepen mutual trust, expand cooperation, manage their differences properly and further enhance their ties.

Von der Leyen, who succeeds Luxembourg politician Jean-Claude Juncker, said the Commission must show its partners at the United Nations that they can rely on the EU as a champion of multilateralism, and that the bloc will invest in alliances and coalitions to advance its values.

"We'll promote and protect Europe's interests through open and fair trade. We'll strengthen our partners through cooperation, because strong partners make Europe strong too," she said.

Shifting between German, French and English during her speech on Wednesday, von der Leyen said the Commission will not be afraid to speak the language of confidence and assertiveness. "But we will do it our way, the European way."

"If there is one area where the world needs our leadership, it is on protecting our climate. This is an existential issue for Europe, and for the world," she said. The European Parliament declared a climate emergency after a vote on Thursday.

She described the European Green Deal as the EU's new growth strategy, helping Europe to cut emissions while creating jobs.

"From China to Canada, through to California, others are working with us on their own emissions trading systems," she said, adding that the new trade commissioner, Ireland's Phil Hogan, will ensure that the EU's future trade agreements will include a chapter on sustainable development.

She also talked at length about how the EU should advance its digitization.

"To grasp the opportunities and to address the dangers that are out there, we must be able to strike a smart balance where the market cannot. We must protect our European well-being and our European values," she said.

The first woman to be Commission president, she noted hers will be the first cabinet to be gender balanced. "And by the end of our mandate, we will have gender equality at all levels of management, for the very first time," she promised.