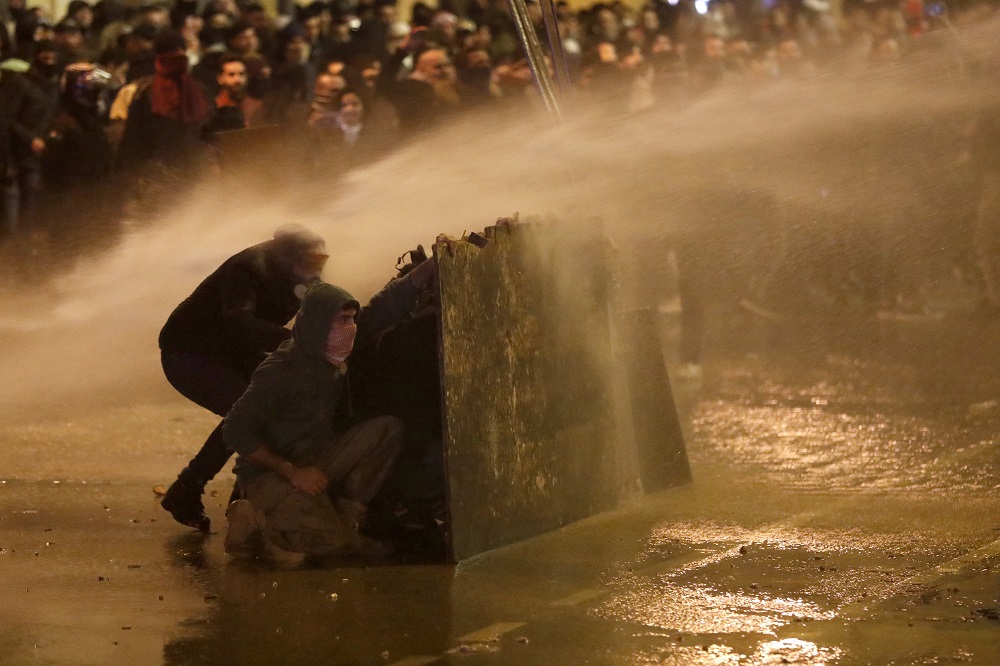 Protesters hide from a water cannon behind a wood barrier as they clash with the riot police in Beirut, Lebanon, on Wednesday. (Photo: AP)

BEIRUT, Lebanon－Lebanon has ended a painful wait for its citizens by unveiling a new Cabinet lineup, but the government was promptly scorned by protesters and faces the Herculean task of saving the economy.

More than a month after he was designated with backing from the Hezbollah movement and nearly three months after his predecessor Saad Hariri resigned under pressure from the streets, Lebanese Prime Minister Hassan Diab on Tuesday announced his Cabinet of 20 ministers.

The academic and former education minister, who was little-known in Lebanon until last month, insisted in his first comments as premier that his Cabinet was a technocratic one that would strive to meet protesters' demands.

"This is a government that represents the aspirations of the demonstrators who have been mobilized nationwide for more than three months," he said.

He said his government "will strive to meet their demands for an independent judiciary, for the recovery of embezzled funds, for the fight against illegal gains".

UN Secretary-General Antonio Guterres welcomed the formation of the new government and said the United Nations will work with the new premier to support reforms in the heavily indebted country grappling with an economic crisis.

A statement issued by Stephane Dujarric, Guterres' spokesman, also said the UN was committed to supporting "Lebanon's strengthening of its sovereignty, stability and political independence".

Groups of demonstrators had gathered in the streets of Beirut before the Cabinet was even unveiled, blocking off a main street in the center of the capital where violent scuffles with the police left dozens wounded over the weekend.

Close to the Parliament building, protesters attempted to rip down barbed wire and throw stones at police, who responded with tear gas and water cannons, a journalist witnessed.

The government, which was scheduled to meet on Wednesday for the first time, includes the country's first female defense minister, Zeina Akar, and five other women.

The post of foreign minister, which had been held by Lebanese President Michel Aoun's son-in-law Gebran Bassil, was handed to diplomat Nassif Hitti.

The Cabinet is made up of unfamiliar figures, many of them academics and former advisers, but protesters were quick to argue that the absence of the biggest names in Lebanon's widely reviled hereditary political elite was but a smokescreen.

"We want a new Lebanon, a Lebanon with no corruption," Charbel Kahi, a 37-year-old farmer, said as fellow protesters beat drums behind him.

"They are not taking the Lebanese people seriously with this government," he said.

Diab conceded that "Lebanon is experiencing a difficult time in its history" and called for stability, but within minutes of his address protesters were out in the streets of several cities, including Tripoli, Sidon and Byblos.