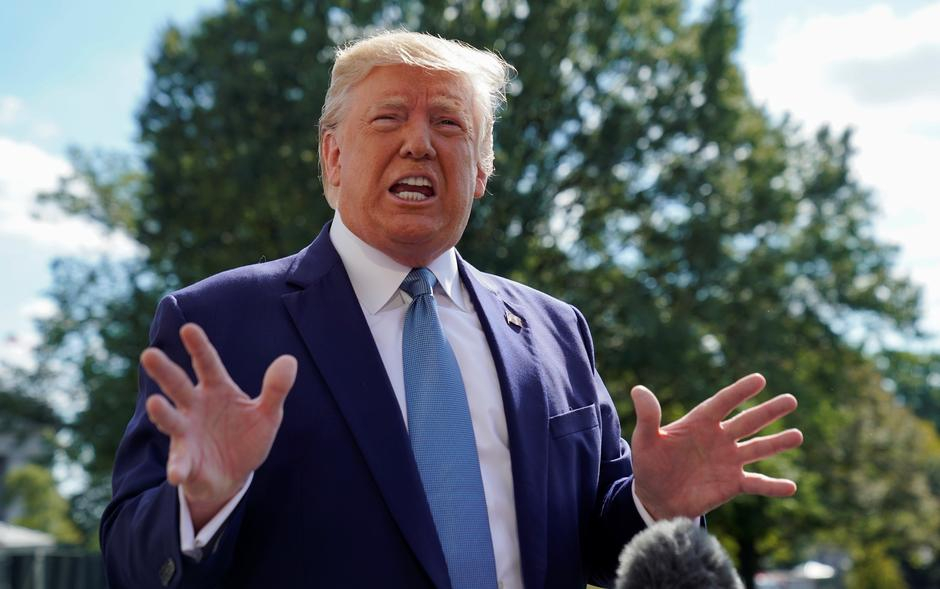 A decorated Iraq War veteran rocked the White House Tuesday with devastating testimony on Donald Trump's alleged extortion of Ukraine as Democrats laid out plans for the public phase of the impeachment inquiry threatening his presidency.

The Democratic-led House is investigating Trump over his bid to pressure Ukraine into digging up dirt on election rival Joe Biden -- and accusations he conditioned nearly $400 million in military aid on the political favor.

His opening statement, released late Monday, offers some of the strongest evidence yet for accusations that Trump abused his office and broke election law to gain Kiev's support for his re-election.

Vindman arrived on Capitol Hill Tuesday in full military dress uniform, as Trump blasted him on Twitter as a "Never Trumper" -- his label for Republicans who fundamentally oppose the president.

"How many more Never Trumpers will be allowed to testify about a perfectly appropriate phone call," he asked.

"Was he on the same call that I was? Can't be possible!"

Republicans mobilized to undercut Vindman's credibility, questioning his loyalty by noting he moved to the US from the Soviet Union at the age of three and suggesting he is part of an effort by the US national security bureaucracy to undermine Trump.

"Donald Trump is innocent. The deep state is guilty," said Republican lawmaker Matt Gaetz, one of the president's most strident defenders in Congress.

The first White House official to testify and a Purple Heart recipient after being wounded in Iraq, Vindman has proved a much more difficult witness for Republicans to dismiss, however, than previous civilian government figures.

The veteran, who ignored White House orders to defy a congressional subpoena to testify, said alarm bells rang during a July 10 meeting with Ambassador to the European Union Gordon Sondland and a Kiev official.

Vindland said Sondland pressured the official to open corruption investigations into a debunked conspiracy theory that Ukraine helped Democrats against Trump in the 2016 election.

He also pushed for a probe into Biden over links between the Democrat's son and a Ukraine energy company, Burisma.

"Following this meeting, there was a scheduled debriefing during which Amb. Sondland emphasized the importance that Ukraine deliver the investigations into the 2016 election, the Bidens and Burisma," Vindman said.

"I stated to Amb. Sondland that his statements were inappropriate, that the request to investigate Biden and his son had nothing to do with national security," he added.

Vindland confirmed the public record of the Trump-Zelensky call, in which Trump responded to Zelensky's request for military aid by asking for "a favor though" before pressing for the investigations of the 2016 story and the Bidens.

"I did not think it was proper to demand that a foreign government investigate a US citizen, and I was worried about the implications for the US government's support of Ukraine," Vindman said.

"I realized that if Ukraine pursued an investigation into the Bidens and Burisma, it would likely be interpreted as a partisan play."

- Next steps for impeachment inquiry -

After interviewing 10 witnesses behind closed doors over the past five weeks, Democrats have drawn up rules for the next stage of the impeachment inquiry that will include public hearings.

"The evidence we have already collected paints the picture of a president who abused his power by using multiple levers of government to press a foreign country to interfere in the 2020 election," senior House Democrats said in a statement.

For the second stage, the House Intelligence Committee will take testimony in open session, with Republicans having a chance to counter with their own witnesses.

In the third stage, the compiled evidence will be sent to the House Judiciary Committee for review, where the White House will have the opportunity to challenge it and present its own evidence.

Then, if the evidence is strong enough, the committee will draw up articles impeachment to be voted on by the whole House, where Democrats have a strong majority.

The White House dismissed the process Tuesday as a "sham," claiming that the Democrats were refusing its basic due process rights. The House vote could take place before or shortly after the New Year.

If impeachment passes, Trump will go on trial for removal in the Senate. The House is expected to vote on the rules on Thursday.