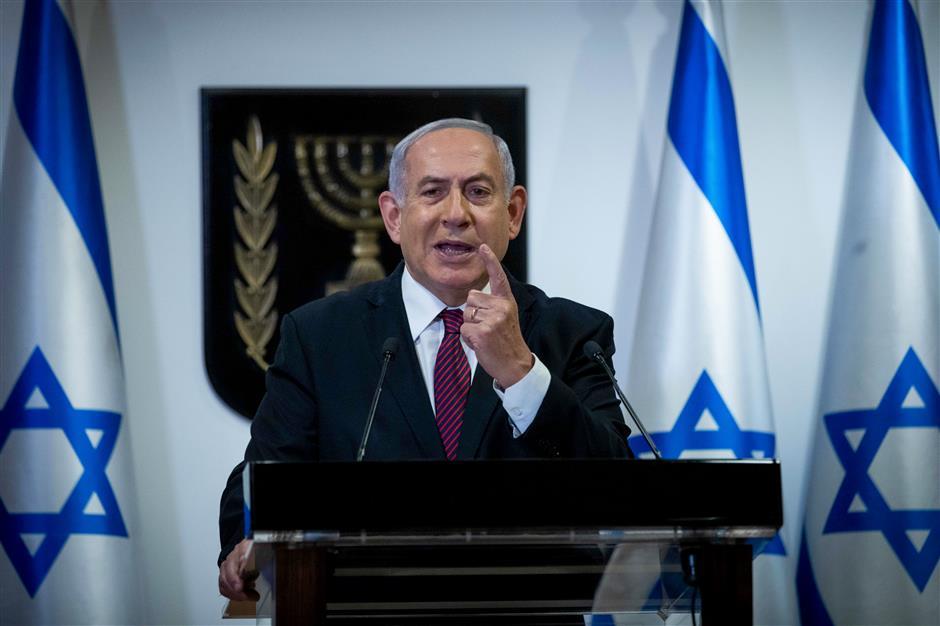 The coalition led by Netanyahu and his former election rival, Defense Minister Benny Gantz, had been inching toward collapse for weeks, amid mutual acrimony and mistrust.

The dissolution of parliament, the Knesset, could see elections held as early as on March 23, likely forcing Netanyahu to seek reelection while the coronavirus pandemic is still raging and as his long-awaited corruption trial intensifies.

The coalition headed by Netanyahu’s right-wing Likud and Gantz’s centrist Blue and White party had until midnight to pass a 2020 budget.

The deadline’s expiration marks the end of a troubled political marriage between Netanyahu and Gantz, who faced off in three inconclusive elections in April and September of 2019 and again in March.

They agreed to form a so-called unity government in April.

The three-year coalition deal had stipulated that Netanyahu serves as premier for 18 months, with Gantz taking over in November 2021.

Gantz demanded the government pass a budget covering both 2020 and 2021, arguing Israel, and the coalition, needed stability. But Netanyahu refused to endorse a 2021 budget.

That, his critics said, was a political tactic to keep the coalition unstable, making it easier for him to sink it before he had to yield power to Gantz.

“The reason we’re heading to an election is because Netanyahu refused to pass a budget as required by law and honor political agreements so that he can stay in power for the duration of his trial,” said Yohanan Plesner, head of the Israel Democracy Institute think-tank.

Late on Sunday, Blue and White said it had an agreement with Likud on a bill to buy more time to pass the budget.

But the Knesset rejected that bill on Tuesday, following yet another round of bitter back-and-forth between Netanyahu and Gantz.

Gantz, currently in precautionary coronavirus quarantine, was unable to vote.

Both Netanyahu and Gantz face substantial political risks in new elections, especially if held in March.

Political commentators have said Netanyahu always planned to force an election before vacating the premier’s office for Gantz, but would have preferred a vote date in June or later.

That would have allowed more time to vaccinate the public against the novel coronavirus and hopefully push Israel’s economy toward recovery.

A March poll would compel Netanyahu to campaign in February, when he is due to appear in court multiple times a week for his trial on charges of bribery, fraud and breach of trust.

He is accused of accepting improper gifts and seeking to trade favors with media moguls in exchange for positive coverage, but denies wrongdoing.

Netanyahu also faces a new challenge from influential right-winger Gideon Saar, who has left Likud to form his own New Hope party.

Multiple polls suggest Saar could peel significant support away from Netanyahu if elections were held soon.

Blue and White fractured when it made a deal with Netanyahu and recent polls suggest it would win only a handful of seats if polls were held soon.