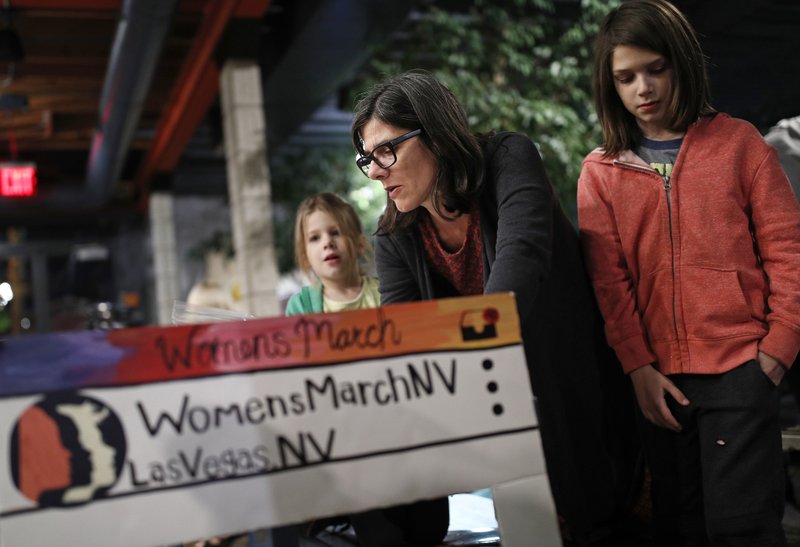 The Latest on women’s marches around the world (all times local):

New Jersey’s new first lady says she was a victim of sexual violence while attending college.

Tammy Murphy told her story Saturday while speaking at a women’s march rally in Morristown. The wife of Democratic Gov. Phil Murphy was introduced to the crowd by her husband, who was sworn into office Tuesday.

Tammy Murphy said the attack occurred while she was a sophomore at the University of Virginia. She said she was walking along a path when a man grabbed her and pulled her into some bushes.

She says the man tried to take her clothes off and attempted to put a crab apple in her mouth to silence her. But she bit his hand and fled half-dressed to a nearby fraternity house where students called police.

“Thor: Ragnarok” actress Tessa Thompson also joined the snowy Saturday protest. She said the time to stay silent is up.

People participating in marches in the U.S. and around the world are walking in support of female empowerment and are denouncing President Donald Trump’s views on immigration, abortion, LGBT and women’s rights and more.

Oklahoma City protesters are chanting “We need a leader, not a creepy tweeter!” with one woman donning a T-shirt with the likeness of social justice icon Woody Guthrie who wrote “This Land Is Your Land.”

People participating in marches in the U.S. and around the world Saturday are walking in support of female empowerment and are denouncing President Donald Trump’s views on immigration, abortion, LGBT and women’s rights and more.

Members of the group Missing and Murdered Indigenous Women of Seattle are burning sage and chanting in front of Seattle’s rainy march.

In Richmond, Virginia, the crowd burst into cheers when a woman ran down the middle of the street carrying a pink flag with the word “Resist.”

Marchers are also out in New York City, Philadelphia, Chicago and more.

President Donald Trump has tweeted that it’s a “perfect day” for women to march to celebrate the “unprecedented economic success and wealth creation” that’s happened during his first year in office.

People participating in rallies and marches in the U.S. and around the world Saturday are in fact denouncing Trump’s views on immigration, abortion, LGBT rights, women’s rights and more.

People at city hall in Austin were calling for his impeachment. Some women were dressed like characters from dystopian novel and series “The Handmaid’s Tale.”

In Cleveland, a 6-year-old girl was holding a sign saying “I can be president.”

Portable toilets at the Chicago rally poke fun at a vulgar statement reportedly made by Trump about some countries.

In Nashville, workshops were held to energize voters.

The women’s march in Washington, D.C., has the feel of a political rally as U.S. Sen. Kirsten Gillibrand and U.S. Rep. Nancy Pelosi urge women to run for office and vote.

Thousands of people turned out Saturday for the rally at the Lincoln Memorial and a march from the National Mall to Lafayette Park.

The rally and march are one of many around the U.S. and the world in support of female empowerment.

Many marchers oppose President Donald Trump’s views on issues including abortion, immigration and LGBT rights. Trump on Friday delivered new support to the anti-abortion movement he once opposed, speaking by video to thousands of activists at the annual March for Life.

A group of women wearing red cloaks and white hats like the characters in the book and TV show “The Handmaid’s Tale” marched in formation Saturday, their heads bowed.

Elsewhere around the U.S., people congregated in Houston; Richmond, Virginia; and Rhode Island. In Los Angeles, organizers are predicting thousands of people, including state officials and celebrities, will march to City Hall.

Millions of people rallied worldwide a year ago at marches for female empowerment. Many opposed Trump’s views on issues including abortion, immigration and LGBT rights. Trump on Friday delivered new support to the anti-abortion movement he once opposed, speaking by video to thousands of activists at the annual March for Life.

Dozens of activists have gathered in Rome to denounce violence against women and express support for the #MeToo movement against sexual assault and harassment.

They were joined by Italian actress and director Asia Argento, who made headlines after alleging in October that she had been sexually assaulted by Hollywood producer Harvey Weinstein in the 1990s.

The 42-year-old Argento addressed the criticism she received once she spoke up about her abuse.

She said she was there to “assess the necessity of women to speak out and change things.”

Argento was strongly criticized by many Italian media and Italian women for not speaking out earlier and was hounded on Twitter with accusations that she sought trouble.

Women’s marches are planned around the world for female empowerment and denouncing President Donald Trump’s views.

Organizers of a New York City rally and march for women’s rights say tens of thousands of people will take to the streets on the one-year anniversary of President Donald Trump’s inauguration.

Saturday’s New York march will be one of an estimated 250 women’s marches planned for Saturday and Sunday around the world.

The scheduled speakers include Ashley Bennett, a Democrat who was elected Atlantic County, New Jersey, freeholder last November. Bennett defeated Republican incumbent John Carman, who had mocked the 2017 women’s march in Washington, D.C. with a Facebook post asking whether the women would be home in time to cook dinner.

Manhattan woman Peggy Taylor says she’s “discouraged” over having to march yet again after Trump’s “disastrous first year.” She said she knows there’s a “long slog ahead.”

Activists are returning to the streets a year after millions of people rallied worldwide at marches for female empowerment, hoping to create an enduring political movement that will elect more women to government office.

Hundreds of gatherings are planned Saturday and Sunday across the U.S. and in places such as Beijing, Buenos Aires, Argentina, and Nairobi, Kenya.

A rally Sunday in Las Vegas will launch an effort to register 1 million voters and target swing states in the midterm elections.

The 2017 rally in Washington, D.C., and hundreds of similar marches created solidarity for those denouncing President Donald Trump’s views on abortion, immigration, LGBT rights and more.

Afterward, a wave of women decided to run for elected office and the #MeToo movement against sexual misconduct became a cultural phenomenon.