New mass protests in France as pension dispute grinds on

Protestors poured into streets across France on Thursday in the latest mass demonstrations against a pensions overhaul that critics say would require millions of people to push back retirement. 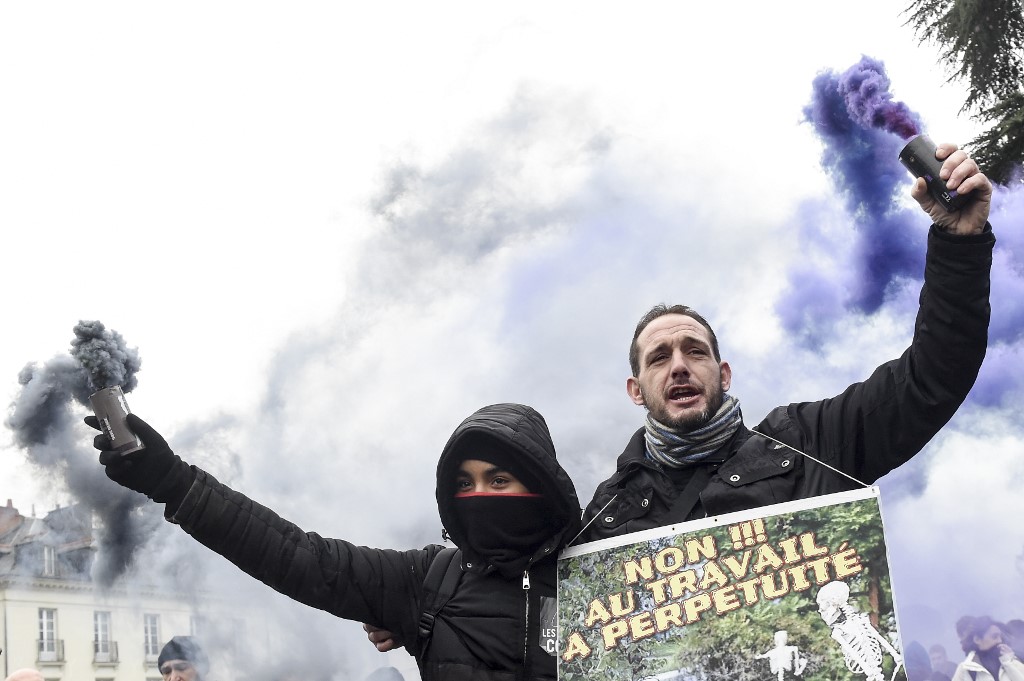 Protestors wave flares and hold a sign that reads in French 'No to work to perpetuity' during a demonstration on day 36 of a nationwide multi-sector strike over French government's plan to overhaul the country's retirement system in Nantes, western France on January 9, 2020. (Photo by AFP)

Unions are demanding the government drop its reform in their biggest show of strength in decades, with a record-breaking public transport strike now in its 36th day.

Teachers and other public-sector workers joined a fourth day of nationwide rallies against the project since the strike began on December 5, leading to school closures that forced parents to scramble for daycare.

Aviation authorities warned of potential cancellations as traffic controllers walked off the job, though Air France said at least 90 percent of domestic flights would go ahead as planned.

Officials have said they are ready to negotiate, in particular on the hotly contested "pivot age" of 64 the government has suggested people will have to work until for a full pension -- beyond the official retirement age of 62.

"Between the government's stance of 'We're talking, everything is on the table' and the reality, you have to wonder if it really intends to... take the views of unions into account," Philippe Martinez of the hardline CGT union said ahead of a march in Paris.

Previous rallies in the capital have been marred by vandalism and clashes with police, and the Eiffel Tower was shut ahead of Thursday's protests.

Thousands of people demonstrated as well in Toulouse, Nantes, Marseilles and other cities against the pension reform, a key plank in President Emmanuel Macron's pledge to shake up wide swathes of the French economy.

"This isn't a reform, it's a sellout," read one banner in the central city of Clermont-Ferrand.

Both sides are hoping to win a battle of attrition for public support, with the government betting that people will lose patience with a strike that has spelled travel misery for millions.

A flurry of polls show support for the protest eroding in recent days, ranging between 44 and 60 percent.

"It's normal that they defend their rights, but they're doing it at the expense of the rest of the population," said Cedric Chevalier, 40, a manager at a clothing store in Paris who was waiting for one of the few trains running in the suburb of Aulnay-sous-Bois.

Apart from his daily commute having doubled, the store's "sales are down at least 20 to 30 percent, which means I'm losing money," he told AFP.

Unions have warned the strike could widen, with CGT energy workers this week blockading fuel refineries and depots, raising fears of petrol shortages.

Another day of mass demonstrations has been called for Saturday.

Even the moderate CFDT union, which backs the plan for a single points-based system that would do away with France's 42 separate retirement schemes, is baulking at the new "pivot age" of 64.

The government says the measure is needed to plug a deficit that is forecast to reach up to 17 billion euros ($19 billion) by 2025 if nothing is done.

The CFDT, France's largest union, has urged the government to drop the measure and agree to a separate "financing conference" with unions, who want companies to pay more in payroll taxes to cover pension payouts.

Prime Minister Edouard Philippe, who is set to meet labour leaders again on Friday, has said he is open to the idea but wants the pivot age to remain for now in the bill he intends to send to parliament in March.

"If the pivot age stays in the law, we will obviously say no," CFDT chief Laurent Berger told AFP Thursday.

Officials appear to be bracing for further weeks of disruptions, with both the CGT and FO unions, powerhouses among public-sector workers, insisting the government drop the reform altogether.