WORLD New migrant caravan sets out from Honduras for US

New migrant caravan sets out from Honduras for US 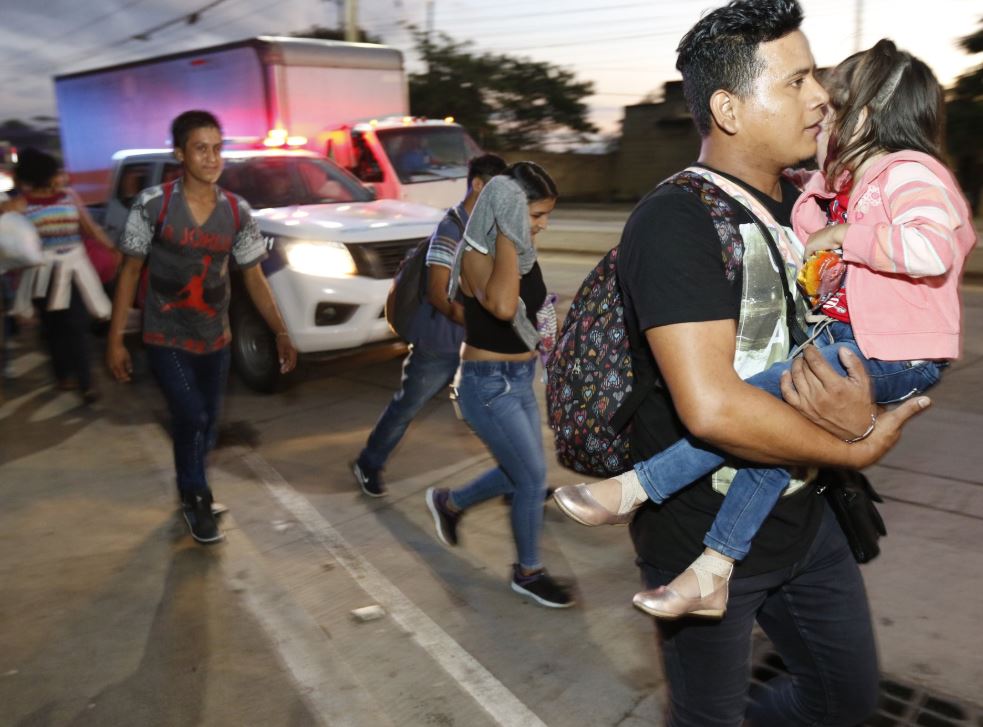 Hundreds of Hondurans trekked out of a violent northern city Tuesday, part of a new caravan of migrants hoping to reach the United States or Mexico, following in the path of another group last year that US President Donald Trump turned into a hot political issue during the US midterm elections.

The first groups of migrants left San Pedro Sula’s bus station Monday night, with many women and children boarding buses bound for the Guatemalan border while others started walking and hitchhiking under a steady rain.

Hundreds of Hondurans trekked out of a violent northern city Tuesday, part of a new caravan of migrants hoping to reach the United States or Mexico, following in the path of another group last year that US President Donald Trump turned into a hot political issue during the US midterm elections.

The first groups of migrants left San Pedro Sula’s bus station Monday night, with many women and children boarding buses bound for the Guatemalan border while others started walking and hitchhiking under a steady rain.

Others departed Tuesday morning trying to catch up. Some pushed toddlers in strollers or walked holding older children’s hands. More people continued to arrive at the bus station, making it likely the caravan’s numbers could grow.

Honduran media reported that the country’s authorities had reinforced the border with Guatemala to make sure everyone had proper documentation. Children must carry passports and written parental authorization to leave the country, and parents could face up to three years in prison if found to be taking a child without the right documents, Security Minister Julian Pacheco was quoted as saying.

Jenny Arguello, a migrant rights’ activist who was with the caravan, said police patrols were not blocking them but were checking IDs.

The latest caravan comes as Trump has been working to convince the American public that there is a “crisis” at the southern border to justify construction of his long-promised border wall. Trump’s demand for billions of dollars to build the wall has resulted in a standoff with Congress that has forced a partial government shutdown.

“A big new Caravan is heading up to our Southern Border from Honduras. Tell Nancy and Chuck that a drone flying around will not stop them. Only a Wall will work,” Trump tweeted Tuesday, referring to Democratic House Speaker Nancy Pelosi and Senate Minority leader Chuck Schumer.

It’s not the first time Trump has seized on migrant caravans to make a political point. In the lead-up to last fall’s elections, Trump frequently referenced several larger groups that had formed at the time, warning that they posed a national security risk and deploying active-duty troops to the border in anticipation of their arrival. Opponents criticized the move as an abuse of presidential power.

In the last caravan, about 6,000 Central Americans ultimately arrived in the northwestern Mexican city of Tijuana, across from San Diego, an area where there is already extensive border fencing. With US authorities only processing several dozen asylum claims each day, migrants added their names to an already long list and faced months-long wait times.

Tijuana was woefully unprepared to handle the influx and directed them to a sports complex that turned into an unsanitary field of mud during rains. As the city closed down its inadequate shelter, the federal government rented a former outdoor concert venue and more than 3,000 people slept there at its peak. As of Monday, fewer than 700 remained.

Mexican officials say about 1,300 migrants from the previous caravan have returned to Central America, while the rest remain in Mexico or have crossed into the US Mexico has issued about 2,900 humanitarian visas to members of the earlier caravan, though it’s unclear how many are still in the country.

Bartolo Fuentes, a migrant advocate accompanying the new caravan, said Tuesday that migration from Honduras will not stop until those chronic problems are resolved.

“People leave every day,” he said. “Every day 300, 400 people go. The caravan has been like a constant river of people to Mexico, to the United States. What happens is it wasn’t visible.”

Caravans have been regular occurrences over the years but went largely unnoticed — until Trump began seizing on them for political purposes.

Migrants see caravans as offering safety in numbers along the northward route where dangers are many and varied. They’re also a relatively cheap option for those who do not have thousands of dollars to pay a smuggler.

“In a caravan or alone, the people are going to continue going because they can’t take what is happening in Honduras,” Fuentes said.

One Honduran woman said she decided to leave with her 9-year-old daughter and 13-year-old son after the girl was raped so badly she suffered medical problems. “It’s not possible to live in Honduras anymore,” said the woman, who refused to give her name because of safety concerns.