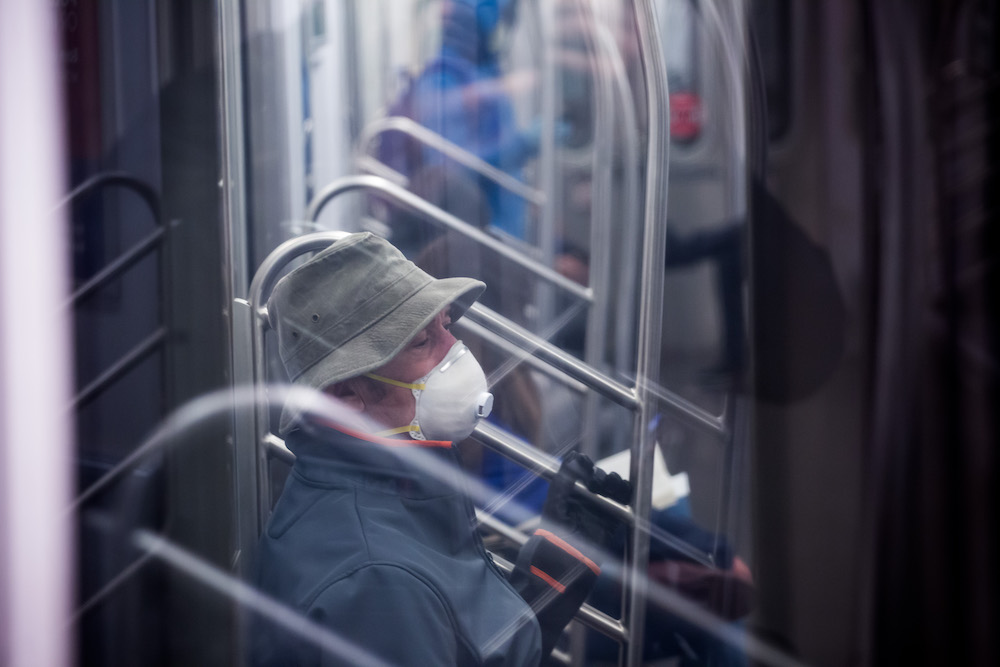 A passenger wears a face mask on a subway train in New York, the United States, March 17, 2020. (Photo by Michael Nagle/Xinhua)

SAN FRANCISCO, April 12 (Xinhua) -- A new data-driven mathematical model of the novel coronavirus pandemic predicts that the United States will peak in the number of "active" COVID-19 cases around April 20, which marks a critical milestone on the demand for medical resources, said a University of Washington study published on Saturday.

"We predict that the United States is on course to reach this point in the coming weeks," said Ka-Kit Tung, a professor of applied mathematics at the University of Washington. "It is a point of maximum strain on a country's health and medical infrastructure."

The predictions differ significantly from the Imperial College London projections of a longer outbreak with 40 percent to 80 percent of the U.S. population infected and 1.1 to 2.2 million deaths. The results from the model used by Imperial College London differed significantly because it relied on separate assumptions about COVID-19 and the predictions were generated when key parameters, such as its infection rates, were unknown, according to Tung.

The model finds that the length of outbreaks will also vary by country. Germany and Italy will take a week longer than the Chinese city of Wuhan to reach their turning point in active COVID-19 cases. The United States is projected to take two weeks longer than Wuhan considering that the United States has no national lockdown, though a majority of states have issued stay-at-home orders, said Tung.

Norden Huang and Fangli Qiao, both from the First Institute of Oceanography's Data Analysis Laboratory in Qingdao, China, created the model with Tung. Their paper describing the analysis is not yet peer-reviewed but has been submitted to a journal for consideration. Their study was posted on March 30 to the preprint site medRxiv.

The researchers tested the model's efficacy using COVID-19 data from China. With an accuracy of a few days, their model predicted key events in the outbreak's growth, spread and decline of COVID-19 in Wuhan City, Hubei Province and the rest of China including the peak of new cases, the peak of active cases and the subsidence of the epidemic. the study said.