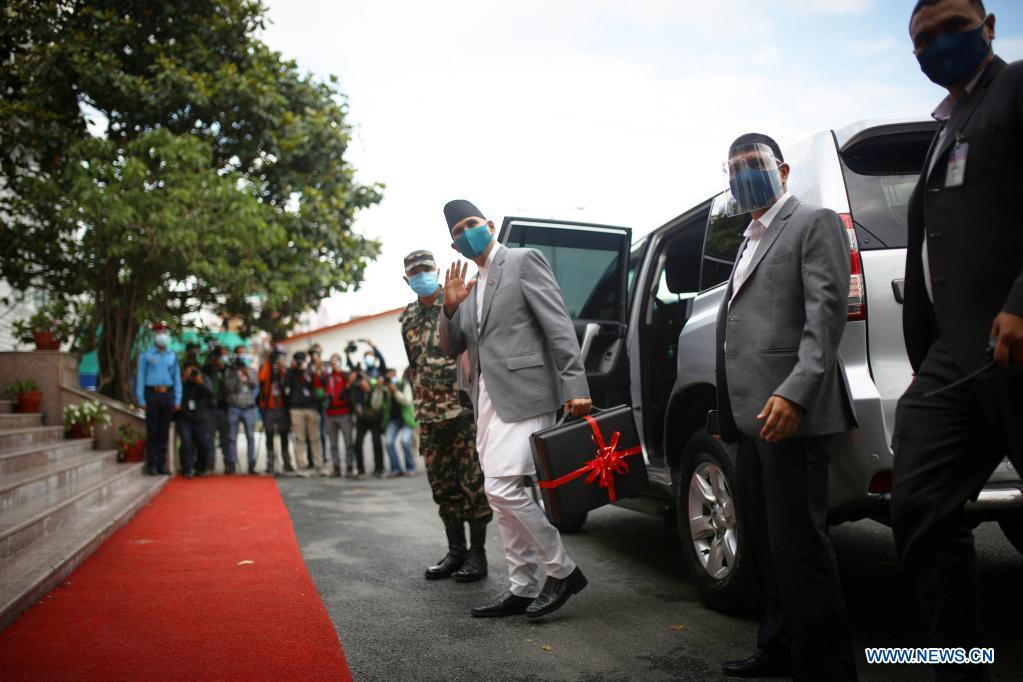 Nepali Finance Minister Bishnu Prasad Paudel arrives at the Office of Prime Minister, carrying the budget briefcase, in Kathmandu, Nepal on May 29, 2021. Nepali Finance Minister Bishnu Prasad Paudel on Saturday presented a budget of 1.64 trillion Nepali rupees (14.17 billion U.S. dollars) for the 2021-22 fiscal year that starts in mid-July, with focus on control of the COVID-19 pandemic and economic recovery. (Photo: Xinhua)

KATHMANDU, May 29 (Xinhua) -- Nepali Finance Minister Bishnu Prasad Paudel on Saturday presented a budget of 1.64 trillion Nepali rupees (14.17 billion U.S. dollars) for the 2021-22 fiscal year that starts in mid-July, with focus on control of the COVID-19 pandemic and economic recovery.

It is the second year in a row that the health sector has got special focus in the budget for the new fiscal year as the country is facing a devastating impact of a second wave of the virus that hit the country in early April.

As of Saturday, Nepal has reported a total of 553,422 COVID-19 cases with the death toll standing at 7,163. Even though the number of new infections has come down in the last few days, health facilities in the country have been pushed to their limit.

Paudel presented the annual budget in a televised address as it could not be done at the House of Representatives, which was dissolved by President Bidhya Devi Bhandari on May 22 for fresh elections.

For the government, the priorities are saving lives from the COVID-19 pandemic, recovering the economy damaged in the epidemic, promoting social security and utilizing public and private resources to boost the productive sector, the minister said.

The fund for the Ministry of Health and Population is increased by 35 percent to 122.77 billion Nepali rupees (1.05 billion U.S. dollars). By allocating 230 million U.S. dollars for the procurement of vaccines against COVID-19, the government is committed to bringing vaccines from manufacturers and countries and inoculating people free of charge, Paudel said.

Nepal has so far administered first dose of vaccines to 2.11 million people, while another 654,851 people have got both jabs, according to the Ministry of Health and Population.

As to relief and recovery for the people and enterprises hurt in the pandemic, Paudel announced that no bill would be charged on drinking water for use up to 20,000 liters per month.

The exemption of electricity bills up to certain units for households is implemented only during the lockdown period, which runs through June 3 in the Kathmandu Valley for now.

The continuation of a rehabilitation fund established last year to provide relief to small and medium-sized enterprises and the tourism sector is also suggested in the budget, which includes tax exemptions to enterprises affected by COVID-19.

In addition, the budget is prioritizing job creation through the development of skills for the youth.

Through the budget, the Nepali government has set a growth of 6.5 percent for the next fiscal year, hoping a vaccination drive could help economic recovery.

As to the 4 percent growth projected last month for the current fiscal year, Paudel acknowledged that it would be challenging now to achieve the goal due to the devastating impact of the pandemic.