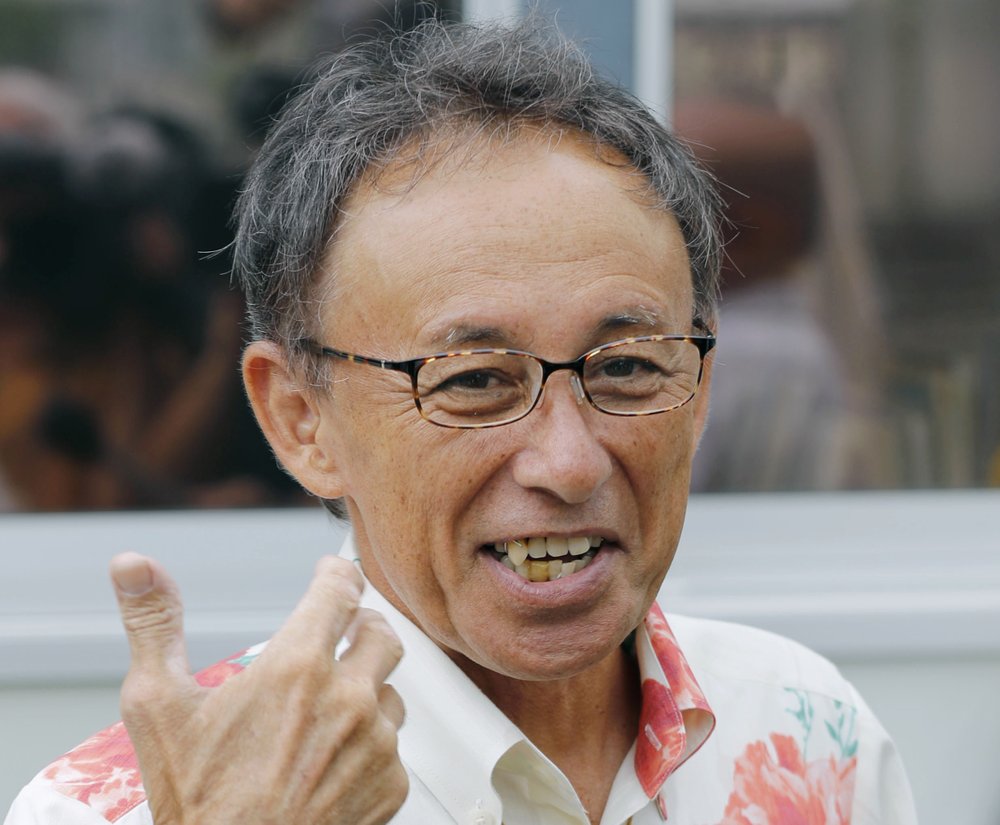 TOKYO, Oct. 12 (Xinhua) -- New Okinawa Governor Denny Tamaki in talks with Japanese Prime Minister Shinzo Abe on Friday maintained his stance that a controversial US base should not be relocated within Japan's southernmost prefecture and that this reflected the voice of the Okinawan people.

"I'm opposed to building a new base in Henoko and the people of Okinawa expressed their opposition in the gubernatorial election. I ask Prime Minister Abe to listen sincerely to the voices of the people of Okinawa," Tamaki was quoted as saying at the start of the meeting.

Abe, for his part, said the government's plans to relocate the US Marine Corps Air Station Futenma from a crowded residential area of Ginowan to the coastal district of Henoko in Nago, also in Okinawa, remained the same.

People of Okinawa want the base to be relocated outside of the prefecture and out of Japan altogether.

Tamaki told a press briefing on the matter that the Okinawa and the central government remain divided over the issue and intimated that he might petition Washington over the controversial and largely opposed base relocation plan.

"Two successive Okinawa governors have stood against the relocation plan. I'd like to make an appeal that the base issue should not be left unaddressed to the United States too," said Tamaki.

In the meeting held at Abe's office and also attended by Chief Cabinet Secretary Yoshihide Suga, Tamaki also called for a "fundamental review" of Japan's agreement with the United States on the status of US forces.

The US.-Japan Status of Forces Agreement (SOFA) has been a source of myriad problems for the prefectural government of Okinawa and local law enforcement officials.

In some instances of accidents and crimes connected to US military personnel or involving military hardware in Okinawa, the bilateral agreement prevents the government and law enforcement officials from exercising the same legal measures as they would ordinarily in Japan.

As a result, accidents involving U.S. military hardware have seen Japanese forces given restricted access to investigate accident sites and US military assets, and in cases of crimes committed by US service personnel, police officials have been denied access to U.S. bases to question or arrest suspects.

Along with calling for a change in this bilateral agreement, Tamaki, who became Okinawa governor on Oct. 4 following the death of his predecessor Takeshi Onaga, also urged the central government to reduce Okinawa's disproportionate base-hosting burdens.

Prior to his death, Onaga revoked a landfill permit necessary for the construction of the new base. Tamaki has said that he was trusted by Onaga, himself a staunch opponent to the base move, before his death, to uphold his wishes and those of the people of Okinawa and continue to block the central government's plans to move the base.

Okinawa hosts the vast majority of Japan's US bases, yet the tiny subtropical island accounts for just a fraction of Japan's land mass.

Instances of violent crimes, including murder and rape by US military-linked personnel along with a near constant string of US military related accidents, particularly those involving aircraft, has led to rising anti-US sentiment on the island and vociferous calls from Okinawans for its seven decades of occupation by U.S. forces to be ended.