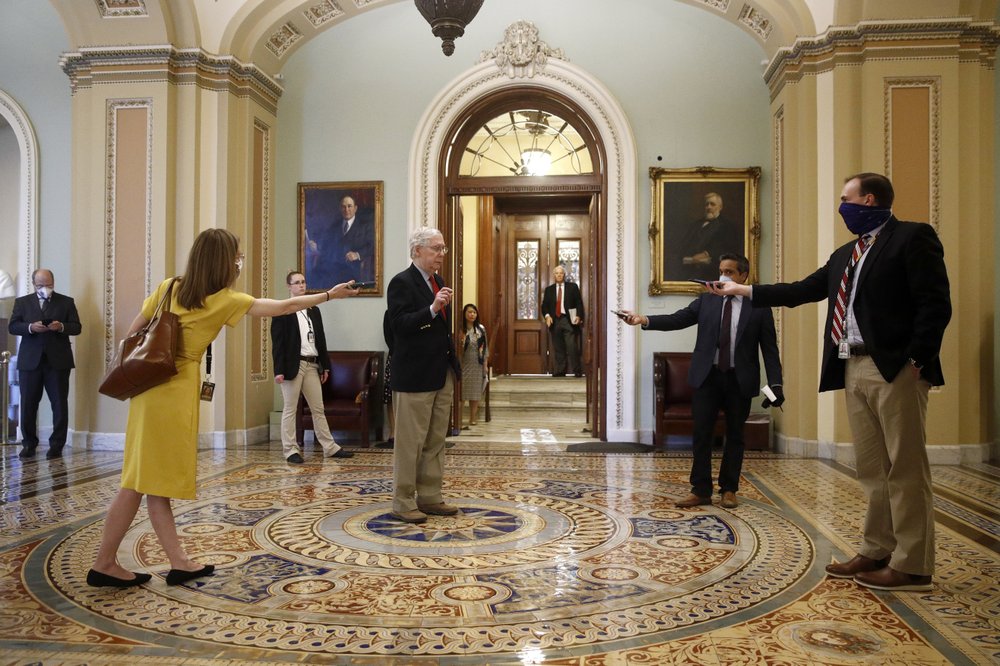 US lawmakers struggled Thursday to break a stalemate over President Donald Trump’s $250 billion emergency request for a small-business program, stoking uncertainty about when additional support will be available in a key rescue program now exhausted of funds.

A Senate session quickly adjourned without any progress, though staff aides to House and Senate Democrats and Treasury Secretary Steven Mnuchin convened another conference call, on legislation to shore up the Paycheck Protection Program and demands by Democrats for potential additions. The Small Business Administration announced Thursday it has reached its $349 billion lending limit and is no longer accepting applications, and Trump immediately weighed in on Twitter to bash Democrats.

GOP aides said that Mnuchin is prepared to accept additional funding sought by Democrats for hospitals, but that additional aid to state and local governments couldn’t get approval in the current round. The aides spoke on condition of anonymity to characterize internal party deliberations.

Thursday’s Senate session featured a short speech by a frustrated majority leader, Mitch McConnell, R-Ky., but no effort to pass Trump’s $250 billion request — or to shame Democrats, were they to block it as they did last week. Instead, McConnell said that he had cleared the $250 billion package on the GOP side but that Democrats would have stopped it.

“Democrats would not let us reopen the program,” McConnell said. “This really should be above politics.”

The Capitol is largely shuttered, requiring consensus from all sides for any legislation to pass, and top GOP leaders are vowing to stick closely to Trump’s request despite Democrats’ additional demands.

The Senate is away from Washington through May 4, but it convenes twice each week for pro forma sessions that could be used to pass more coronavirus aid — though only if no senator objects. The next Senate pro forma is Monday afternoon; no action is expected at a brief Friday House session.

McConnell, asked by a reporter whether he could support any agreement reached by Senate Minority Leader Chuck Schumer and Mnuchin, was noncommittal.

“Well, look, we’d take a look at it. My members want to plus up the small-business program. We think the need is obvious,” he told reporters. “And all the money for the other programs is not yet out the door. It doesn’t mean we won’t be dealing with them later, but we have an emergency, we ought to deal with it.”

GOP leaders McConnell and Kevin McCarthy are back in Washington to monitor developments. McCarthy, the House minority leader, is closer to Trump, but both seem to fear Mnuchin might be willing to contemplate concessions that rank-and-file Republicans would find objectionable.

The program gives grants to businesses with fewer than 500 workers so that they can maintain payroll and pay rent while shutting down their businesses during social distancing edicts.

The program has been swamped by businesses applying for loans and has reached its appropriations limit. Mnuchin says $250 billion more is needed immediately.

But Democrats want money for hospitals burdened under COVID-19 caseloads and additional funding for states and local governments straining as the economy slides into recession.

They also want to make sure the Paycheck Protection Program is opened up more to businesses that don’t have established relationships with banks that have been accepting applications for rescue funding.

Pelosi is pressing to add money to be distributed by community development financial institutions, which are small, nontraditional lenders that focus on making loans in underdeveloped and underserved neighborhoods, typically communities with larger minority populations.

“We want to make sure that, as it gets more money, many more people get access to the credit,” Pelosi said.

Eventually, the need for consensus seems likely to result in a relatively limited package.

Republicans are agitating to help rural hospitals, while Democrats are also keen to boost aid to cash-strapped states and local governments whose revenues have cratered. Aiding the states may be a stretch for now, however, as the issue can easily provoke fights between large, high-tax states like California and New York and smaller states more typically run by Republicans.