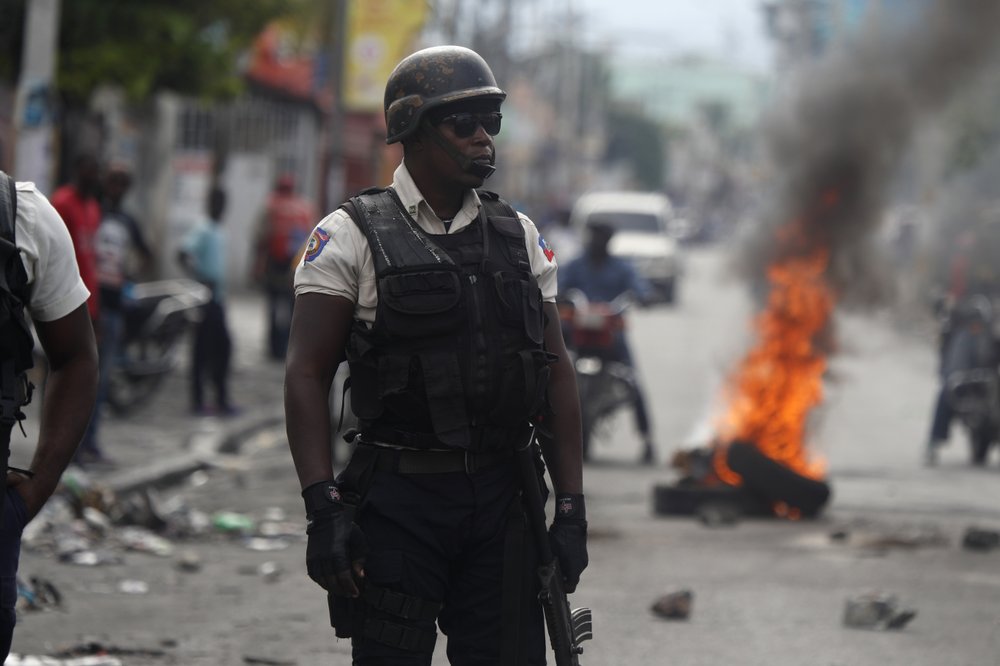 A police stands near a burning barricade set up by protesters in Port-au-Prince, Haiti, Sept. 30, 2019. (Photo: AP)

Demonstrators set fires Monday and chanted calls for Haiti’s president to resign as the opposition to Jovenel Moïse tried to increase pressure for him to leave office.

Schools, businesses and government offices were closed as protesters gathered chanting, “Down with Jovenel!”

“We can’t continue to live like this,” said 34-year-old Lestin Abelo as he poured gasoline on a pile of debris that quickly caught fire. “We have a government that’s not doing anything for the people.”

Opposition leaders and supporters say they are angry about public corruption, spiraling inflation and a dwindling supply of gasoline that has forced many gas stations in the capital to close. Suppliers have demanded that the cash-strapped government pay them more than $100 million owed.

Protesters also are demanding a more in-depth investigation into allegations that top officials in the previous government misused billions of dollars in proceeds from a Venezuela-subsidized oil plan meant to fund urgent social programs.

“Ever since he became president, it’s been misery,” he said. “If the president doesn’t go, the country is going to burn to ashes.”

Moïse, who began his five-year term in 2017, has said he will not step down despite the unrest and instead called for calm, unity and dialogue during an address televised at 2 a.m. Wednesday. It was a rare appearance for the president since the new wave of protests began about three weeks ago.

Laurent Dubois, a Haiti expert and professor at Duke University, said he believes the country will face an increasing impasse unless the parties find a way to reach some kind of resolution.

“There’s a lot of fear, a lot of anxiety ... that things are going in a direction in Haiti that we haven’t seen in a while,” he said. “It seems like we’re going into some kind of new phase in Haitian history, but what it holds will be difficult to predict.”

Opposition leaders demanding Moïse’s resignation say they envision a transitional government after the chief justice of Haiti’s Supreme Court takes over as dictated by law if a president resigns.

André Michel, an attorney and professor of human rights, said Haiti’s current political system has generated misery, underdevelopment and corruption that have led to poverty, and noted that the country’s middle class has shrunk.

Michel said Haiti needs to rebuild a new society and state and he called on the international community to back the ouster of Moïse.

“The will of the people is clear,” Michel said. “If he insists on remaining as president, he will lead the country into chaos.”

At a news conference Sunday, opposition leaders urged the dozens of supporters gathered around them to start blocking streets and to help them find Moïse, who they contend has gone into hiding.

Among those leading the call to find Moïse was opposition Sen. Youri Latortue, who has denied corruption allegations that US officials made against him more than a decade ago and who once led a party allied with Moïse’s Tet Kale faction.

“We’re going to search for him everywhere,” Latortue said.