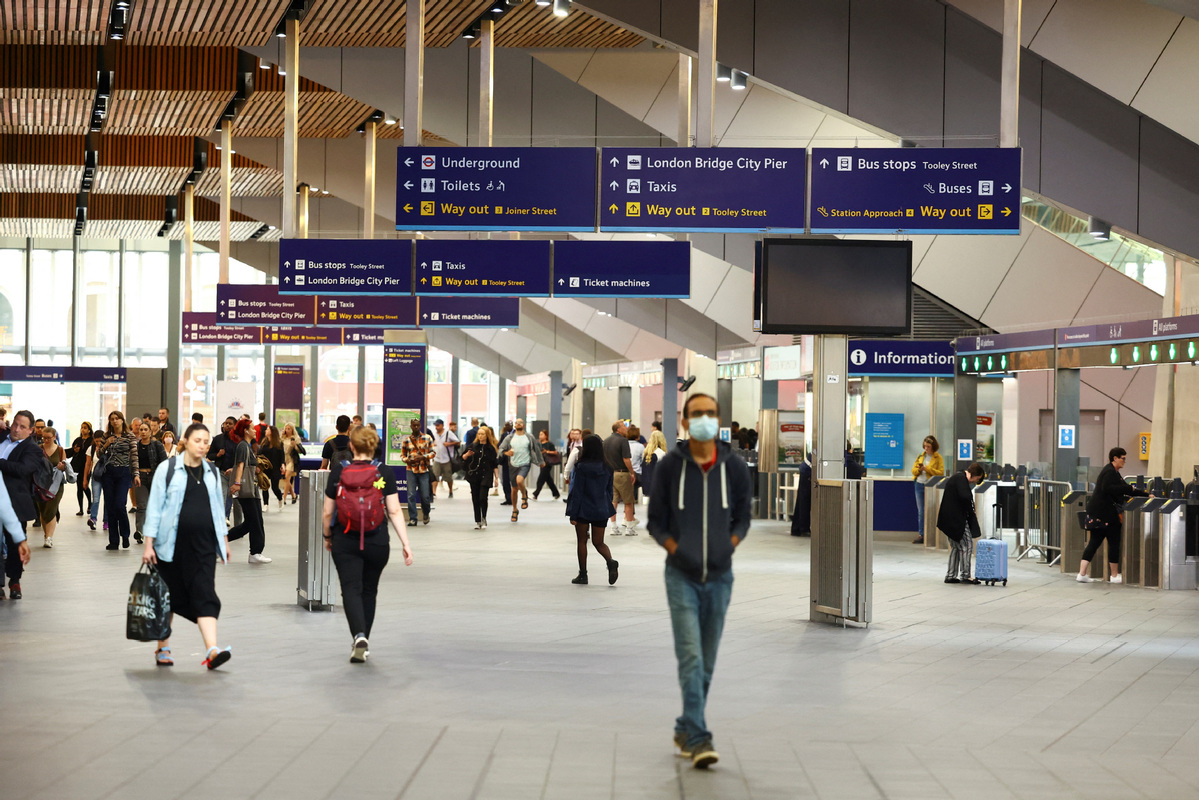 People walk at the London Bridge station, during a rail strike in London, Britain July 27, 2022. [Photo/Agencies]

LONDON - More than 40,000 railway workers across Britain are taking a 24-hour strike on Wednesday, bringing another day of widespread delays and cancellations.

The action by workers from Network Rail, 14 train companies, and members of the Rail, Maritime and Transport union (RMT), has left only one out of five trains running on average and stopped train service altogether in some parts of the country.

The labor action is part of the ongoing dispute between unions and rail companies over pay, job security and working conditions.

People across the United Kingdom (UK) are struggling against rising living costs and seeing their salaries eaten up by soaring inflation. The latest data showed Britain's Consumer Prices Index (CPI) rose by 9.4 percent in the 12 months to June, hitting a fresh 40-year high.

"Our members are more determined than ever to secure a decent pay rise, job security and good working conditions," said RMT general secretary Mick Lynch. "Network Rail has not made any improvement on their previous pay offer and the train companies have not offered us anything new."

Meanwhile, UK's rail companies are set to cut jobs, pay and pensions as rail passenger numbers have not returned to pre-COVID-19 pandemic levels.

Andrew Haines, Network Rail chief executive, described the strike as "political campaigning" and "pointless" and said he can "only apologize for the impact this pointless strike will have on passengers."

Wednesday's strike came after the biggest rail strike in 30 years which took place on June 21, 23 and 25 and caused traffic chaos across England, Scotland and Wales.

Further rail strikes are already planned for the coming weeks.

About 6,000 train drivers from the Associated Society of Locomotive Engineers and Firemen (ASLEF) union across eight train companies will go on strike on July 30.

Another strike by RMT members at Network Rail and 14 train companies is scheduled for Aug 18 and 20. Underground workers will also take strike action again on Aug 19.

Network Rail urged the passengers to plan ahead and travel by train only if necessary amid further national industrial actions.