The new president of the Tokyo Olympic organizing committee has begun holding weekly news conferences hoping to win over a doubting Japanese public with the postponed games opening in just under five months. 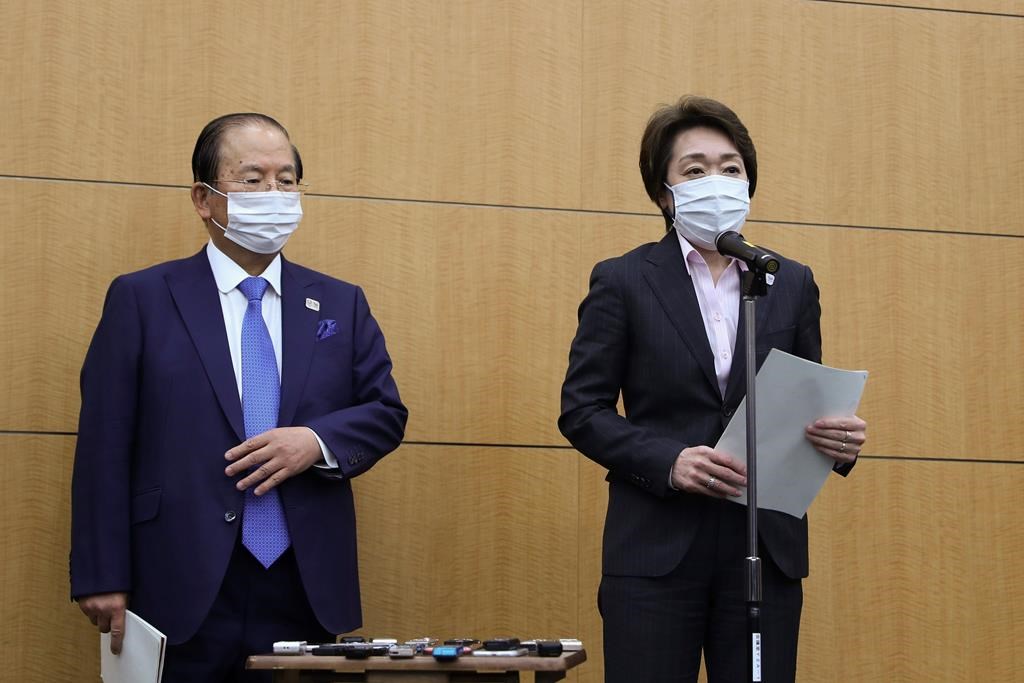 Seiko Hashimoto, right, president of the Tokyo Organizing Committee of the Olympic and Paralympic Games (Tokyo 2020), speaks as Toshiro Muto, CEO of Tokyo 2020, stands by her after a five-party meeting at the Tokyo 2020 headquarters in Tokyo on Wednesday, March 3, 2021. (Photo: AP)

Seiko Hashimoto is trying to assure everyone that the Olympics will be safe and secure, a phrase she repeated a dozen times Friday in her inaugural news conference.

Polls show about 80% of Japanese think the games should be postponed again or canceled amid the pandemic.

“The situation around coronavirus doesn't go easy on us,” Hashimoto said. “I understand there are a lot of people in Tokyo and in Japan who have concerns about the games in Tokyo this summer. I'd like to share my thoughts and alleviate some of those concerns."

She also needs to ease fears about the torch relay, which is set to begin on March 25 from the northeastern prefecture of Fukushima. The relay involves 10,000 runners and goes to every corner of Japan.

The Olympics open on July 23, followed by the Paralympics on Aug. 24. They will include 11,000 Olympians, 4,400 Paralympic athletes and tens of thousands of judges, officials, sponsors, volunteers, VIPs, media and broadcasters.

“People need to start to build confidence in the safety of the games,” Hashimoto said. “It will be very difficult without that.”

Hashimoto said she has appointed CEO Toshiro Muto to head the relay effort. The Olympics were postponed a year ago just as the torch relay opened. If the relay falters with crowding, cheering spectators and unprepared local authorities, the Olympics could go down with it.

Early conjecture hinted at calling off the relay, but it is heavily sponsored by Coca-Cola and Toyota. Sponsors and the sale of broadcast rights account for 91% of the International Olympic Committee's income.

Hashimoto has promised to make a decision on admitting fans from abroad by March 25, or at least by the end of the month. The Mainichi newspaper reported this week, citing an unnamed government source, that foreign fans will not be allowed. IOC President Thomas Bach also hinted at the decision going that way.

Hashimoto has not confirmed it.

“Welcoming everyone globally and having a full audience is something we wish we could do," she said. “But health-care conditions in Japan have to be well prepared. Otherwise, some people may come as spectators and cause harm.”

Hashimoto took over two weeks ago after the former president of the organizing committee, Yoshiro Mori, was forced to resign following derogatory comments about women. Hashimoto almost immediately appointed 12 women to the executive board, bringing the total to 19 out of 45, or 42%. It had been 20%.

Tokyo was awarded the Olympics 7 1/2 years ago and had few women in visible positions of authority until Hashimoto shook things up.

Hashimoto said she hoped the move put a focus on the issue of gender equality in Japan. The country ranks 121st of 153 on the World Economic Forum's gender-equality ratings.

“People in the world are now paying attention to gender issues, diversity issues on the organizing committee," she said. “The quick response is very important. And that was the premise of us taking action. But increased numbers or an increased percentage should not be the main goal.”