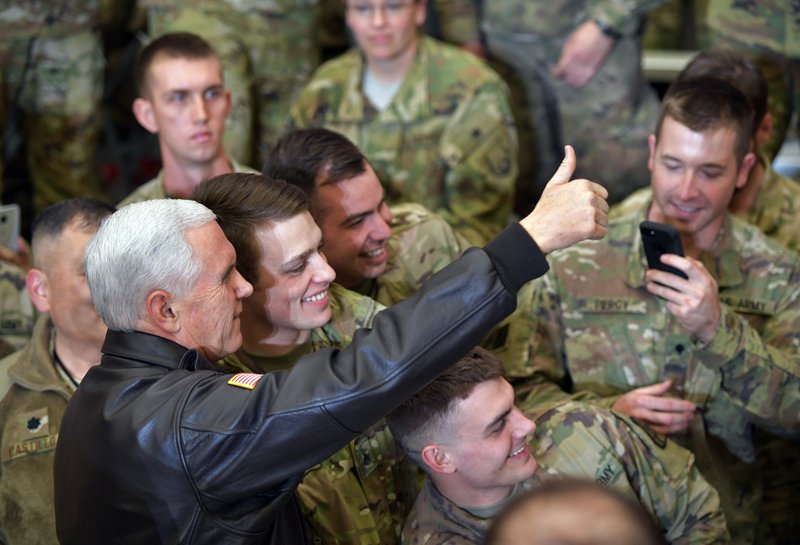 Vice President Mike Pence swooped into Afghanistan for a secret meeting with Afghan leaders and a visit with US troops, pointing to progress four months after President Donald Trump announced a new strategy to end a stalemate in America’s longest war.

Pence’s unannounced trip was the first to the war-ravaged country by either Trump or the vice president, and it came as the Trump administration is seeking to stabilize the country by strengthening Afghan forces and seeking a conclusion to the 16-year war there.

The vice president said Trump’s new strategy was “already bearing fruit” across the country, citing dramatic increases in American air strikes and a partnership with the Afghan military that has “put the Taliban on the defensive.” He said the administration was pouring resources into the military to help them prevent terror attacks on US soil.

“The road before you is promising, but it’s perilous. And this commander-in-chief is clear-eyed about the threats you face and the challenges that lie ahead,” Pence said. “But today, let me assure you: President Trump has your back.”

Under heavy security, Pence landed Thursday at Bagram Air Base, the largest US base in the country, shortly after sunset and then arrived by helicopter in the capital of Kabul to meet with Afghan President Ashraf Ghani and Afghan Chief Executive Abdullah Abdullah.

“We’re here to see this through,” Pence told Ghani and Abdullah at the presidential palace.

Pence said that Ghani offered assurances that Afghanistan was preparing for parliamentary elections next year and a presidential election in 2019. He said the US expected Afghanistan to continue to make political reforms and root out corruption.

Later, at a rally-style event at Bagram Air Base, Pence told hundreds of US troops: “I believe victory is closer than ever before.”

The vice president’s trip was focused on buttressing Trump’s new strategy, released in August, to “fight to win” in Afghanistan by attacking enemies, routing al-Qaida and preventing terrorist attacks against Americans. The first-year president has urged the US to shift away from a “time-based” approach to the protracted conflict by linking US assistance to results and cooperation from the Afghan government, Pakistan and other partners.

The White House has described the new Afghanistan plan as a “regional” strategy that aims to cultivate cooperation among other South Asian nations, including the overturning of Pakistan’s harboring of elements of the Taliban.

At least 15,000 US forces are in Afghanistan after Trump decided to send about 3,800 troops to the country this fall to enhance US efforts to advise Afghan forces and conduct counterterrorism missions.

The expected deployment of hundreds more US Army trainers to Afghanistan early next year could increase the total number of American forces there to nearly 16,000, US officials have said.

Top US officials, including Secretary of State Rex Tillerson and Defense Secretary Jim Mattis, met with Afghan leaders in recent months in hopes of stabilizing the country. But in a sign of the delicate security situation, the Taliban unleashed a barrage of rockets at the Kabul international airport in late September that targeted Mattis’ plane during his trip to the country. The US responded with an airstrike.

The US and allied forces have been fighting a resurgent Taliban, which controls nearly half the nation, as well as an Islamic State group affiliate in Afghanistan, which continues to struggle with unrest following the 2001 US-led invasion.

The influx of US trainers is emblematic of the military’s renewed focus on building up Afghan forces so they can fight the insurgents and take control of their country’s security. That approach aims to reverse setbacks experienced by Afghan forces in recent years, as the Obama administration steadily reduced US troop levels from a peak of roughly 100,000 in mid-2010.

US leaders have also pressed NATO allies to increase their troop commitments to Afghanistan to help train and advise the Afghan forces and redouble the US-led counterterrorism fight.