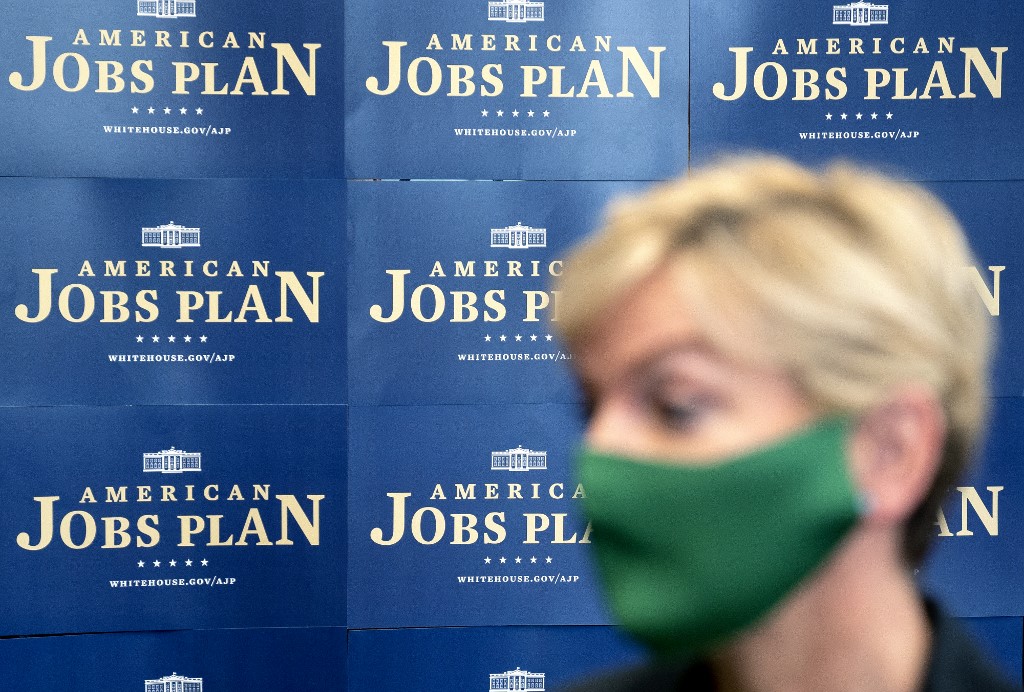 In this file photo taken on May 3, 2021, American Jobs Plan signs are displayed as US Energey Secretary Jennifer Granholm speaks to reporters following a roundtable discussion at Howard University in Washington, DC. (Photo: AFP)

The Labor Department reported 444,000 new unemployment filings, seasonally adjusted, were made in the week ended May 15 -- fewer than expected and 34,000 less than the previous week's upwardly revised level.

Another 95,086 claims, not seasonally adjusted, were made under the Pandemic Unemployment Assistance (PUA) program aiding workers like the self-employed who are not eligible for regular assistance, nearly 9,000 less than the week prior.

"The message from the data remains one of a gradual decline in layoffs, although the level is still elevated," Rubeela Farooqi of High Frequency Economics said.

"With reopening ramping up and businesses less constrained by restrictions, filings should ease further as the economy moves closer to normal capacity."

Jobless claim filings have trended down in recent weeks as Covid-19 vaccines allow businesses to return to normal and rehire workers laid off last year, when the pandemic began and claims soared into the millions each week.

The government reported a massive nearly 16 million people were receiving some form of unemployment aid as of the week ended May 1, the latest for which data was available, but that figure was also becoming smaller.

The number of PUA claimants as of that week had declined by nearly 680,0000 from the week prior, while the number of people receiving aid under a pandemic program for the long-term unemployed fell almost 150,000.