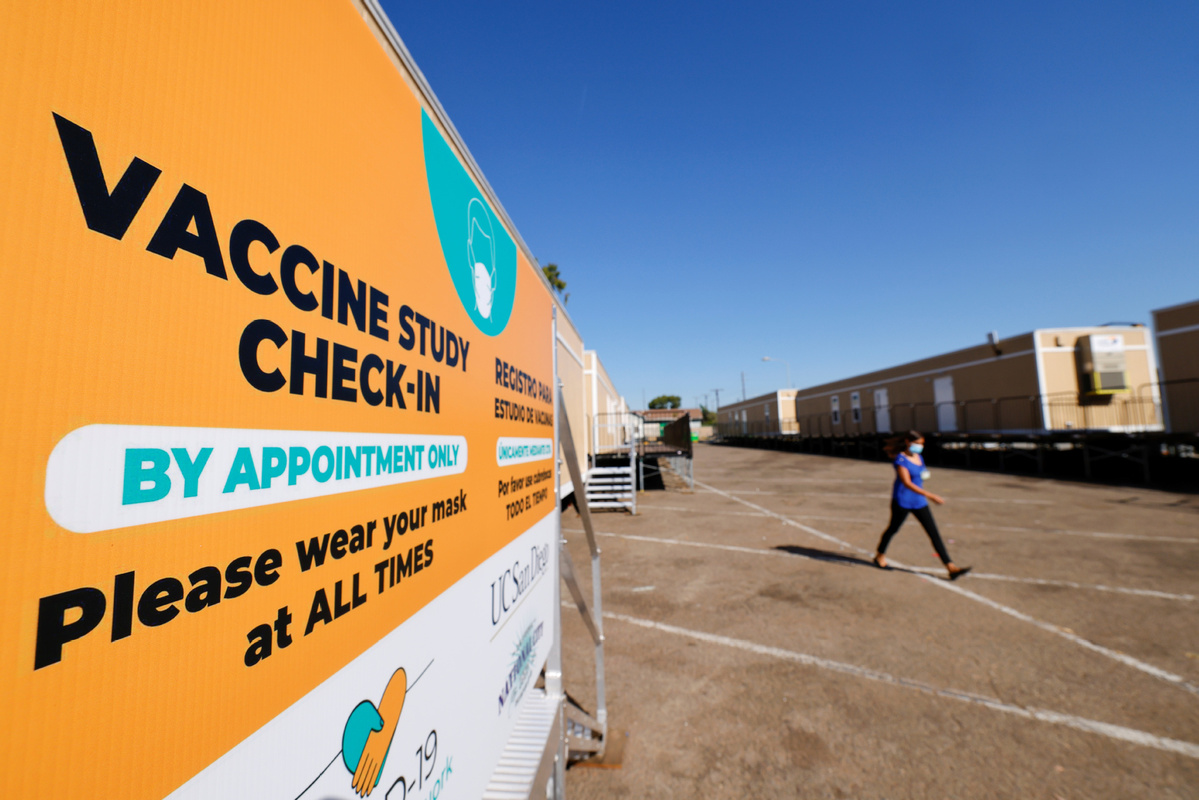 Trailers are shown in a city parking lot after a Phase 3 trial location of Johnson & Johnson's Janssen (COVID-19) vaccine candidate was announced in National City during the outbreak of the coronavirus disease (COVID-19) in National City, California, US, Oct 13, 2020. (Photo: Agencies)

A third major COVID-19 vaccine trial has begun in the United Kingdom as the race to find a way to push back the spread of the novel coronavirus continues.

Following last week's announcement by pharmaceutical companies Pfizer and BioNTech that their work was having 90 percent success rate in trials, Belgian company Janssen, a subsidiary of the United States-based Johnson and Johnson, is the latest to put its efforts to the test, using a genetically-modified version of the common cold virus.

Vaccines from Novovax and a collaboration between the University of Oxford and AstraZeneca are already being tested in the UK. The Janssen one will involve around 6,000 people in the UK as part of a global total of 30,000 participants.

The company already has one trial running with people receiving one dose, but the new one will see half of the volunteers given two doses, two months apart.

The head of the UK vaccine task force, Kate Bingham, said all efforts toward helping find a secure and effective vaccine were valuable. "Many vaccines are needed both here in the UK, and globally, to ensure we can provide a safe and effective vaccine for the whole population," she said. "I would continue to encourage people to sign up and take part in vaccine trials."

At the weekend, the chief executive of BioNTech, Ugur Sahin, said he hoped his company could start to deliver vaccine by the end of this year, and a high vaccination rate before next fall could see "a normal winter next year."

At the same time, the British government has announced the opening of two new "mega labs" early next year, to double testing capacity. Together, the proposed facilities at Leamington Spa in the East Midlands and an unspecified location in Scotland, will increase daily testing capacity by 600,000.

In a separate move, the National Health Service, or NHS, says that by the end of this month, it will have launched 40 clinics specializing in long COVID, the virus's lingering after-effects, which affect more than 60,000 patients across the country.

The program will cost ten million pounds ($13.2 million), and will be accompanied by the setting up of a medical task force.

"These pioneering long COVID clinics will help address the very real problems being faced by patients today while the taskforce will help the NHS develop a greater understanding of the lasting effects of coronavirus," said the NHS's chief executive Simon Stevens.

Scientists at the National Cancer Institute in Italy have made a discovery that could rewrite the pandemic story after finding evidence the virus was circulating in the country as early as September 2019, five months before Italy's first recognized case of novel coronavirus, on Feb 21 2020.

A study of a lung cancer research program published in Tumori Journal found more than 11 percent of blood samples from healthy volunteers had developed antibodies before February.

Previously, there had been reports of higher than usual levels of severe pneumonia and flu in the Lombardy region in the last quarter of 2019.This was one of the areas first and hardest hit when COVID-19 began to spread, so it now appears that the coronavirus may already have been present.

With Christmas looming, the pandemic which has so drastically changed the academic year looks like it is also going to take its toll on school nativity plays.

A survey of nearly 1,500 teachers revealed that almost half of schools would not be having a traditional Christmas performance this year, and in some cases, they would be replaced with virtual events.

The Guardian newspaper even reported that one school, Sedbergh Preparatory in Cumbria, was filming a reception class production involving location shoots, using real stables and children in fields with goats.

"It's been an experience that has also prompted us to think about things a little differently this year, so that will be reflected in what will also hopefully be a fun way," said Emma Goligher from the school's marketing team.