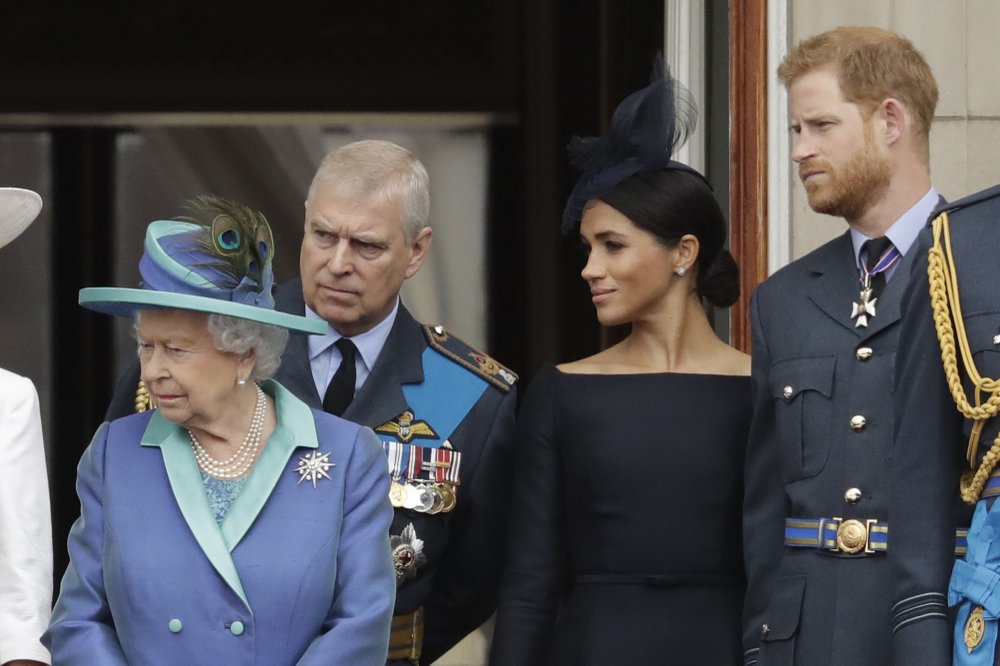 Queen Elizabeth II ended 2019 with a public plea for global harmony after a rocky year. She’s starting 2020 trying to heal disharmony within her own family after Prince Harry and his wife, Meghan, decided to “step back” as senior royals —- and announced the news without consulting the monarch.

As the British media went into meltdown, the royal matriarch moved quickly to take back control, ordering courtiers to sort out a future role for the couple within days. Elizabeth, who assumed the throne in 1952, has weathered family crises before, and is determined not to let her restless grandson and granddaughter-in-law weaken the House of Windsor or undermine the monarchy.

Representatives of the queen, Harry and Meghan, Harry’s father Prince Charles, and older brother Prince William were holding talks over the couple’s unorthodox declaration of independence. U.K. media reported Saturday that the queen wants a solution found before Harry’s next scheduled public appearance, a rugby event at Buckingham Palace next Thursday.

Meghan, meanwhile, has flown to Canada, where the couple and their 8-month-old son, Archie, spent a six-week Christmas break. They announced this week they plan to “balance” their time between the U.K. and North America, with Canada their likely base. Meghan is American but lived in Toronto for several years while filming the TV show “Suits.”

The prince and the former actress married in 2018, and broadcasts of their Windsor Castle wedding were watched around the world. Harry, 35, is sixth in line to the British throne, a former British army officer and one of the royal family’s most popular members.

He has spent his entire life in the public eye, but has not always been happy with scrutiny by a media he blames for the death of his mother, Princess Diana. She died in a car crash in Paris in 1997 while being pursued by photographers.

British tabloids have a voracious appetite for stories about the royal family, who are treated as an engrossing national soap opera. While much royal media coverage is positive, it is also relentless. At times, news outlets have crossed the line from invasive to illegal, as when the News of the World hacked the voicemails of Prince William and royal staff in search of scoops during the early 2000s.

Some columnists have been critical of Meghan, depicting her as a meddling American interloper into the royal family; others highlighted her biracial heritage with words like “exotic.” In 2017, Harry accused the media of directing “a wave of abuse and harassment” at his then-girlfriend that included articles with negative “racial undertones.”

Harry and Meghan’s shock decision to become part-time royals who earn their own money came after a rough year for the queen. In September she was drawn into the U.K.’s political discord over Brexit when Prime Minister Boris Johnson asked her to suspend Parliament as lawmakers tried to thwart his plans to take Britain out of the European Union. The Supreme Court ruled that the suspension was illegal and Johnson had misled the monarch about his reasons for it.

In November, her son Prince Andrew gave a disastrous television interview about his friendship with the late sex offender Jeffrey Epstein. His awkward performance failed to silence questions about the queen’s second son, who has relinquished royal duties and patronages after being accused by a woman who says she was an Epstein trafficking victim and claims to have slept with the prince.

In her annual televised message to the nation on Christmas Day, the queen appeared to allude to both national and family divisions when she said that the path to harmony and understanding “is not always smooth, and may at times this year have felt quite bumpy.”

She urged people to “set aside past differences and come together in the spirit of friendship and reconciliation.”

Ironically, some of Meghan and Harry’s unhappiness may stem from the queen’s efforts to strengthen the monarchy by making it more lean and slimmed down. An image released by Buckingham Palace last week of the queen and the three heirs next in line to the throne — Charles, William and William’s son George — appeared to underscore who the Windsors see as their core members.

“From Harry and Meghan’s point of view, they’re just being driven out,” Tom Bradby, an ITV television anchor who is close to the couple, said.

The discord comes at a delicate time for Britain’s monarchy. The queen remains robust, but she at age 93 she has handed over a growing number of public duties to Charles and William. Her husband of 72 years, Prince Philip, Duke of Edinburgh, has retired from public life and was recently hospitalized.

“It’s hard not to think that if the Duke of Edinburgh had been around and in circulation more, that perhaps this particular situation wouldn’t have got out of control,” Majesty magazine Managing Editor Joe Little said. “The queen may be head of state, but the duke is still very much head of the family, although inevitably at 98 and a half, he’s much less hands-on than he used to be.”

The queen values stability and has personal experience of the tumult that can be caused by affairs of the heart.

She was not born to reign, but became heir to the throne at age 10, when her uncle King Edward VIII abdicated so he could marry divorced American Wallis Simpson, making Elizabeth’s father King George VI.

The current rift is not a crisis on that scale, but royal historian Hugo Vickers said Harry’s “quest for personal happiness” ahead of duty was reminiscent of Edward VIII and represented a similar anomaly within the royal family.

“The queen has always done her duty first,” Vickers told broadcaster ITV. “And people like Prince Philip and Princess Anne and obviously (Charles) the Prince of Wales have all been tremendously good at being there to support the queen whenever she needs them.”

While Harry and Meghan’s plans have drawn a mixed response in Britain, there has been near-universal sympathy for the queen. That extended to US President Donald Trump, who said Friday that the family situation she’s dealing with was “sad.”

“I just have such respect for the queen,” Trump told Fox News. “I don’t think this should be happening to her.”