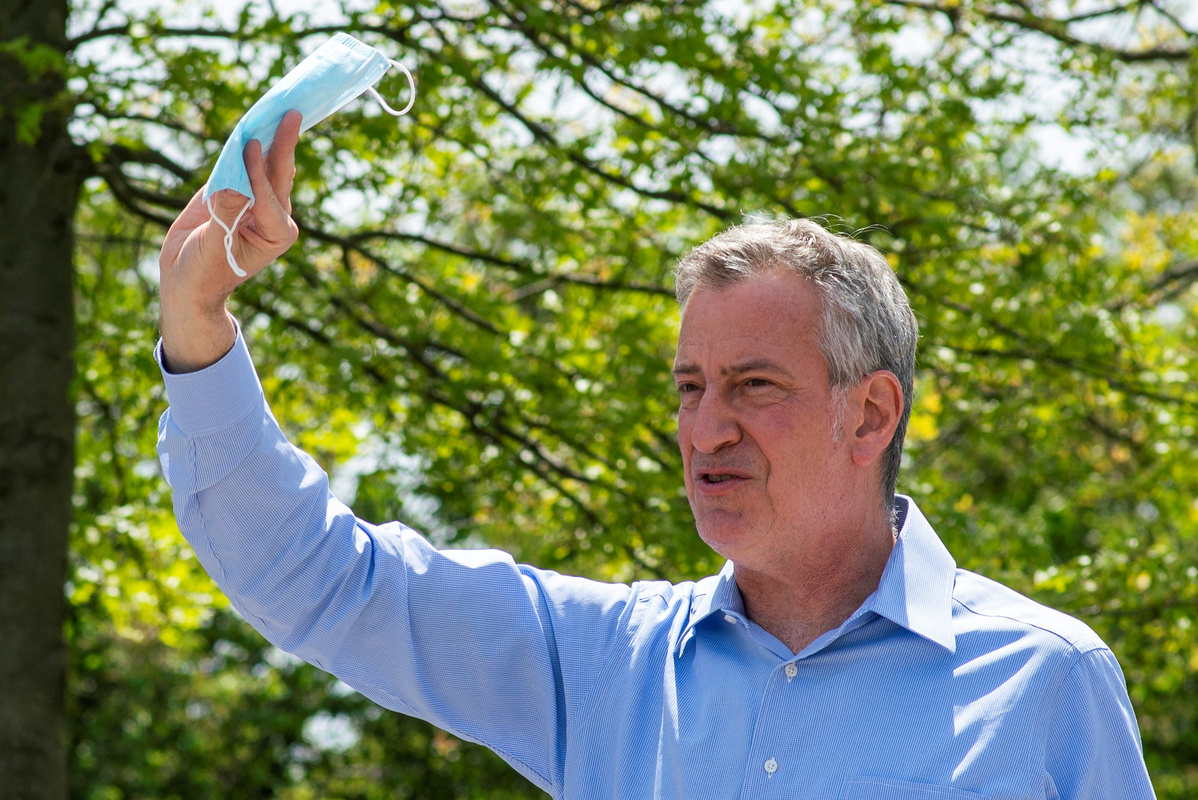 New York City Mayor Bill De Blasio speaks to people as he gives away face masks for using on public spaces to prevent the spread of coronavirus disease (COVID-19) in the Queens borough of New York City, US, May 16, 2020. (Photo: Agencies)

NEW YORK - New York City is expected to enter phase one of the reopening process in early June with up to 400,000 people back to work, Mayor Bill de Blasio confirmed on Thursday.

At his daily briefing, the mayor said the city is "now in a position to start opening things up step by step, phase by phase" and he expected it to enter phase one in the first or second week of June.

He estimated that a total of 200,000 to 400,000 people would be back to work in businesses of construction, manufacturing, wholesale trade and curbside pickup for certain types of stores.

Businesses are required to limit capacity to 50 percent, and implement social distancing. Workers have to cover their faces when a six-foot distance cannot be maintained, said de Blasio.

Shared surfaces in a workplace must be cleaned regularly, and employees have to undergo a temperature check and fill out a questionnaire regarding their health conditions every morning, he noted.

"We're going to constantly make sure we are holding back this disease, and we're going to make sure that we are putting the steps in place all the time to avoid it ever having a resurgence," he noted.

Any business that attempts to open but should not yet be open during phase one will be told to shut down. If a business refuses to shut down, it could face a daily fine of 1,000 U.S. dollars, the mayor warned.

According to state-established metrics for reopening, New York City still has not achieved goals in shares of total hospital beds and ICU beds available as of Thursday. It is the only region in New York state that remains under the "PAUSE" order.

New York State Governor Andrew Cuomo held Thursday's briefing in Flatbush in New York City's borough of Brooklyn, one of the hardest-hit neighborhoods in the pandemic. The state's testing results have shown neighborhoods with lower-income workers and minorities have higher rates of COVID-19 infections and the virus is still spreading there.

Cuomo said the state would deliver 1 million masks to such neighborhoods within 24 hours. The state has already distributed more than 8 million masks across the city.

He noted that he would sign an executive order mandating private businesses to deny entry to individuals who do not wear masks or face-coverings.

"You don't want to wear a mask, fine. But you don't then have a right to then go into that store if that store owner doesn't want you to," said Cuomo.

The state reported 74 more deaths due to COVID-19 on Thursday, the same as the number reported a day before, according to Cuomo.

The governor confirmed 1,768 additional cases, bringing the statewide total to 366,733. The state's death toll is approaching 30,000, according to the state tally.