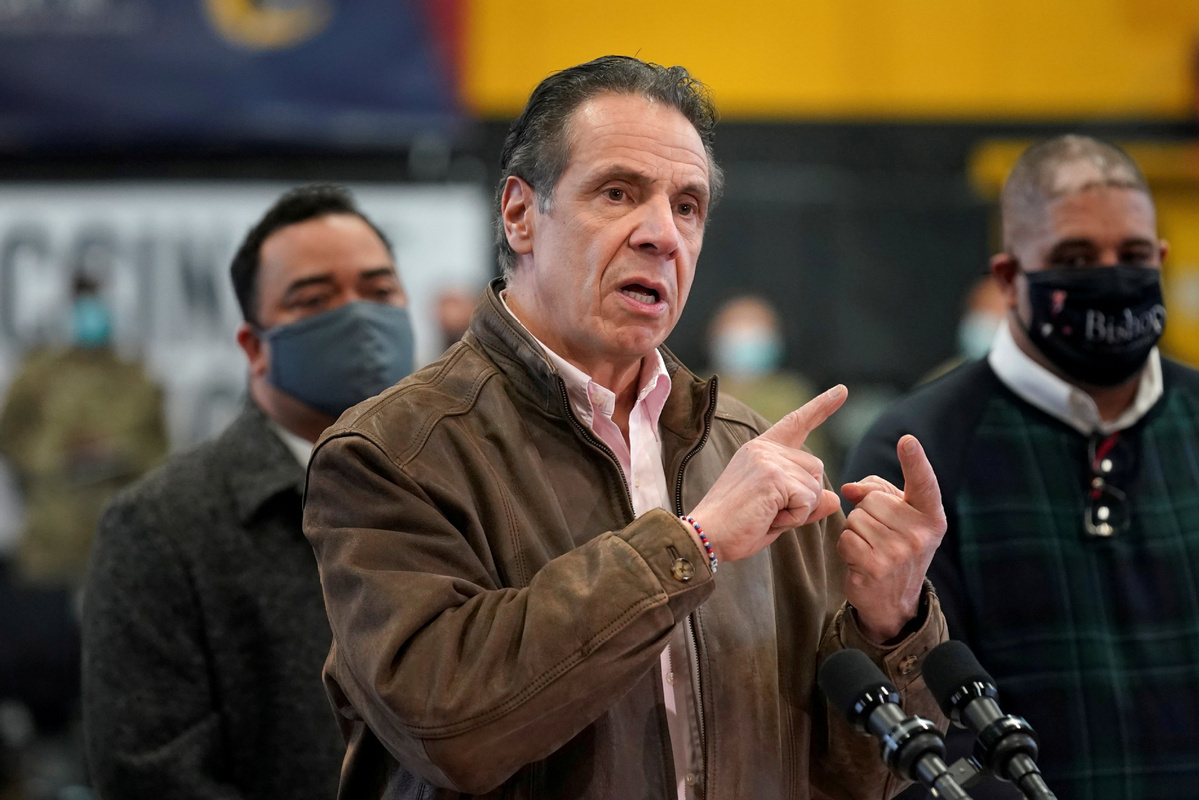 New York Governor Andrew Cuomo speaks during a news conference at a vaccination site in the Brooklyn borough of New York, US, Feb 22, 2021. [Photo/Agencies]

This time the allegations came from 25-year-old former health adviser Charlotte Bennett, who told The New York Times that the governor sexually harassed her during spring last year.

According to Bennett, the 63-year-old politician said in June that he was open to dating women in their 20s, and asked her if she thought age made a difference in romantic relationships, the Times reported.

While Cuomo never tried to touch her, "I understood that the governor wanted to sleep with me, and felt horribly uncomfortable and scared," Bennett told the newspaper.

She added that she spoke to Cuomo's chief of staff and legal counsel, who transferred her to another post in another building. Bennett was happy with the new job and decided not to insist on an investigation.

But the harassment allegations come as he faces a growing storm over his handling of the coronavirus in nursing homes in his state.

In a statement on Saturday, Cuomo said he "never made advances toward Ms Bennett nor did I ever intend to act in any way that was inappropriate".

He said he wanted instead to support Bennett, who had told him that she was a sexual assault survivor.

The governor, whose third term expires at the end of 2022, called for "a full and thorough outside review "of these charges, led by a former federal judge.

"I ask all New Yorkers to await the findings of the review so that they know the facts before making any judgments," he said.

This is the second time in a week that the Democratic governor, who has led New York state for 10 years, has been accused of sexual harassment.

Last Wednesday, another ex-adviser, Lindsey Boylan, said in a blog that he had harassed her when she was working for his administration from 2015 to 2018.

New York Mayor Bill de Blasio on Thursday joined a growing chorus of politicians calling for an investigation into the allegations made against Cuomo.