Nearly 3,000 small businesses in New York City have been forced to close due to the economic impact of the novel coronavirus pandemic－the largest number of any US city. 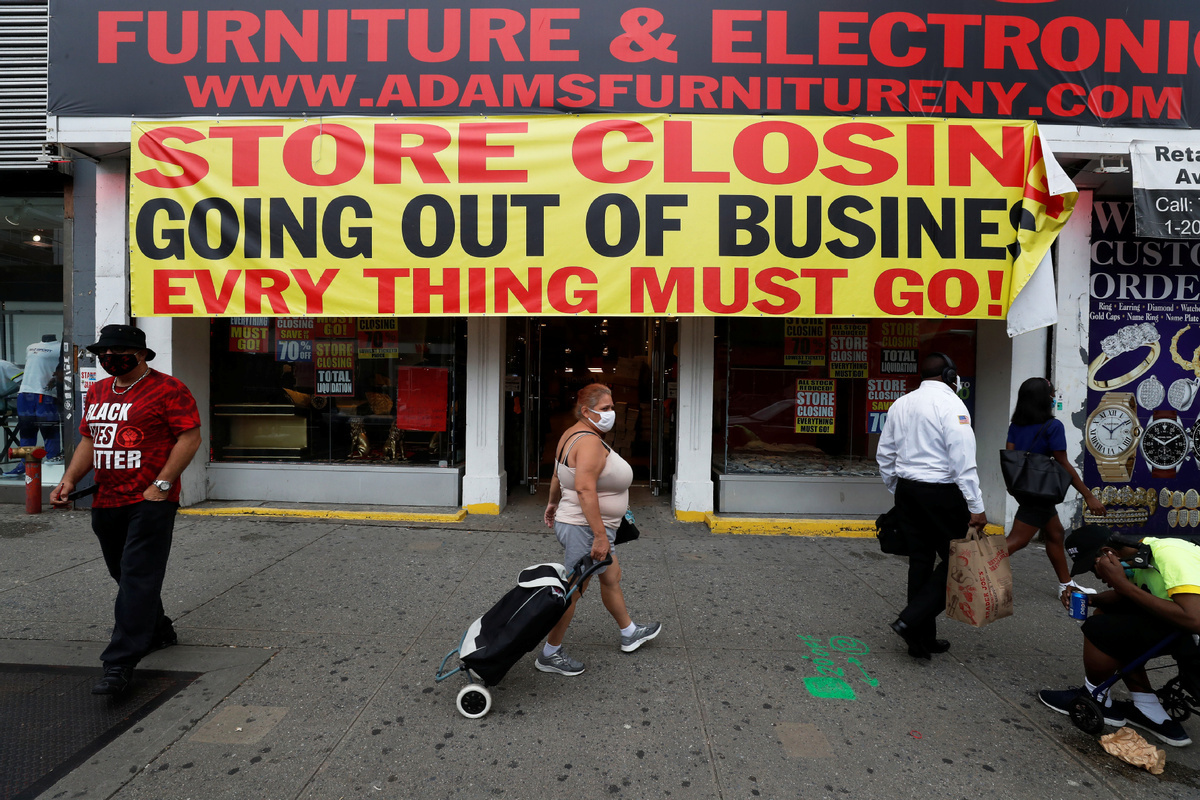 People walk by a store going out of business along 125th street in the Harlem neighborhood of New York City, New York, US, August 7, 2020. [Photo/Agencies]

Since March 1, at least 2,800 small businesses have closed, according to Yelp, the business review website, and some business experts believe the number could be higher.

The closings started when New York Governor Andrew Cuomo ordered a lockdown in March to contain the spread of the virus.

New York City's distinct neighborhoods are home to many small businesses, from one-of-a-kind coffeehouses and mom-and-pop dry cleaners to family-owned hardware stores and ethnic restaurants. They give their areas a distinctive identity, often representing the culture of people who historically have lived there.

Bali Kitchen, an Indonesian restaurant in the East Village, closed on Aug 1. "Unfortunately, we have been forced to close due to the pandemic," the restaurant said on its website.

Many businesses suffered when they had to close temporarily at the height of the pandemic. However, some have since rebounded by offering takeout, delivery or outdoor dining.

Thousands of restaurants in the city have been battered by the pandemic fallout, despite a phased reopening since July that added outdoor dining and curbside delivery.

More than 80 percent of the restaurants and bars did not pay their full rent in June, according to the NYC Hospitality Alliance, forcing the industry to work with officials to find solutions.

Melissa Fleischut, president and CEO of the New York State Restaurant Association, said, "For many restaurateurs, it is a steep hill to climb, but elected officials understand this, and we're hopeful that they will enact policies to ease the burdens facing the industry."

Data from the business group Partnership for New York City suggested that about a third of the city's 240,000 small businesses－those with 500 employees or fewer－could eventually close by the time the pandemic has ended.

This would be a huge blow to the sector, since it represents a large percentage of the city's employers and provides 3 million jobs, 520,000 of which already have been eliminated, according to the group.

Many restaurants citywide are likely to close permanently.

Nationwide, small businesses are also hemorrhaging. Figures from Yelp show that of the 80,000 shops that permanently shut from March 1 to July 25, at least 60,000 of them were local businesses.

In addition, 800 small businesses filed for Chapter 11 bankruptcy from mid-February to July 31, according to the American Bankruptcy Institute.

Small businesses nationwide employ almost half of all American workers and account for about 44 percent of the country's economic activity, according to a report by the US Small Business Administration.

But most store owners said they have spent the money and don't have access to long-term capital, making it harder for their business to survive the pandemic.

Talks underway in Congress for a second relief package were at a stalemate.

"As early as January, businesses were seeing tremendous declines in their activity, and many restaurants started shutting down as early as January in what is usually a season between the calendar New Year and the Lunar New Year, and the weeks following the new year, that is usually the high season for a great deal of business activity in the Chinese community and broader Asian community," said Liu.

About 10,500 businesses in the city are owned by members of ethnic minorities or women, according to The New York Times.

In July, New York Mayor Bill de Blasio signed an executive order to strengthen the city's use of minority and women-owned businesses. City agencies pledged to obtain goods, services and construction services from such businesses for contracts valued at up to $500,000.

"Our city works best when everyone－regardless of race, gender or ethnicity－has the resources they need to participate in our economy," de Blasio said.