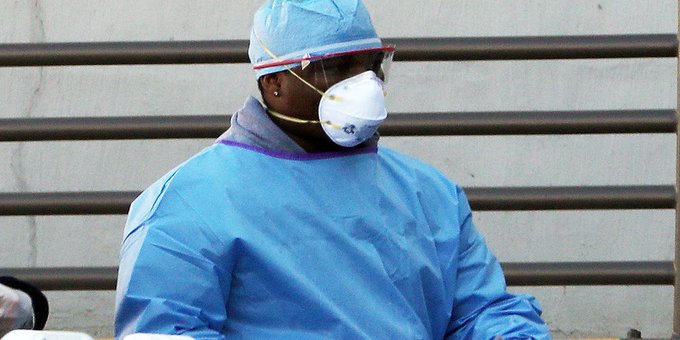 NEW YORK, April 7 (Xinhua) -- The U.S. state of New York lost 731 lives to COVID-19 from Monday to Tuesday, bringing the state's death toll to 5,489 while marking the deadliest 24 hours yet since the pandemic took hold here, said Governor Andrew Cuomo on Tuesday.

"Behind every one of those numbers is an individual, is a family, is a mother, is a father, is a sister, is a brother. So a lot of pain again today for many New Yorkers and they're in our thoughts and prayers," said Cuomo at his daily briefing on coronavirus.

Meanwhile, the numbers of daily incubations and ICU admissions declined for another day, and the state is reaching a plateau in the total number of hospitalizations, which are all "good news," said Cuomo.

The number of deaths "is a lagging indicator to the number of hospitalizations," explained Cuomo, emphasizing that the flattening of the curve is still just a projection.

"It still depends on what we do and what we do will affect those numbers, " he noted.

The governor said he's thinking about restarting the economy with a smart approach, first with those who have resolved from the disease and developed immunity.

"That would mean that you're no longer contagious and you can't catch the virus because you have the antibodies in your system, which means you can get to work and go back to school, you can do whatever you want," said Cuomo.

He said the state developed an antibody testing regimen and will be working with the Food and Drug Administration to bring it to scale.

Meanwhile, testing for determining who have been infected remains significant for slowing down the spread. Cuomo announced the state will invest in private companies to bring rapid COVID-19 testing to scale and accelerate testing capacity.

The governor added that the Navy hospital ship Comfort docking at New York Harbor will be used for treating COVID-19 patients, after the governor made a plea to President Donald Trump on Monday.

The ship's original 1,000 beds will be scaled down to 500 as COVID-19 patients need more space in treatment, which "is still a tremendous benefit," said Cuomo.