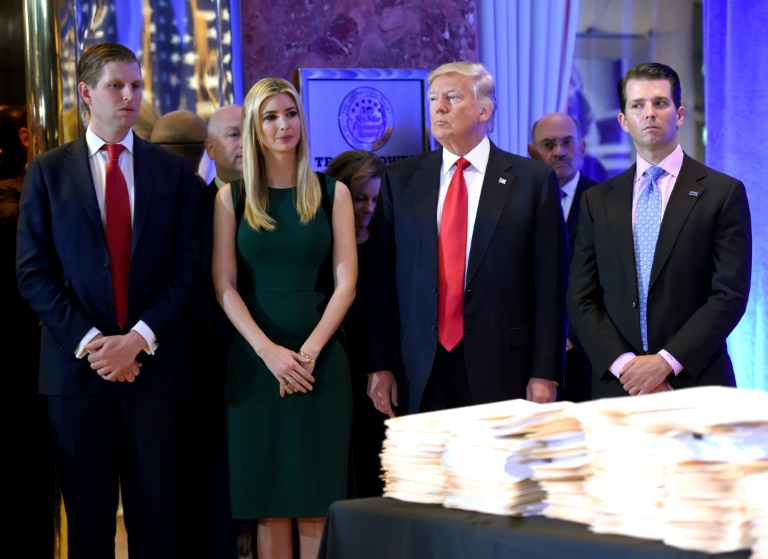 US President Donald Trump along with his children Eric(L) Ivanka and Donald Jr. in 2017: they were accused in a New York lawsuit Thursday of misusing funds at the Donald J. Trump foundation, the president's personal charity.(Photo: AFP)

New York State filed suit Thursday against President Donald Trump, his sons and daughter, alleging a pattern of "persistently illegal conduct" at their family foundation and seeking the charity's dissolution.

It says the real estate tycoon elected president in 2016 used charity funds from the foundation to pay his legal bills, promote his Trump-branded hotels, and for personal spending.

The lawsuit also claims that Trump used the foundation illegally to raise $2.8 million to support his presidential campaign in a televised fundraiser on January 28, 2016 -- held as he skipped a Republican presidential primary debate.

Trump quickly responded with tweets in which he called the suit a "ridiculous case" and indicated he will fight it.

The suit names the president, sons Donald Trump Jr. and Eric Trump, and daughter Ivanka Trump, who were on the board of the foundation.

It seeks restitution of $2.8 million and the shutdown of the foundation, as well as a 10-year ban on Trump serving on the board of any other New York charity.

A one-year ban is asked for his three children.

"As our investigation reveals, the Trump Foundation was little more than a checkbook for payments from Mr. Trump or his businesses to nonprofits, regardless of their purpose or legality," said New York Attorney General Barbara Underwood.

"This is not how private foundations should function and my office intends to hold the foundation and its directors accountable for its misuse of charitable assets," she said in a statement.