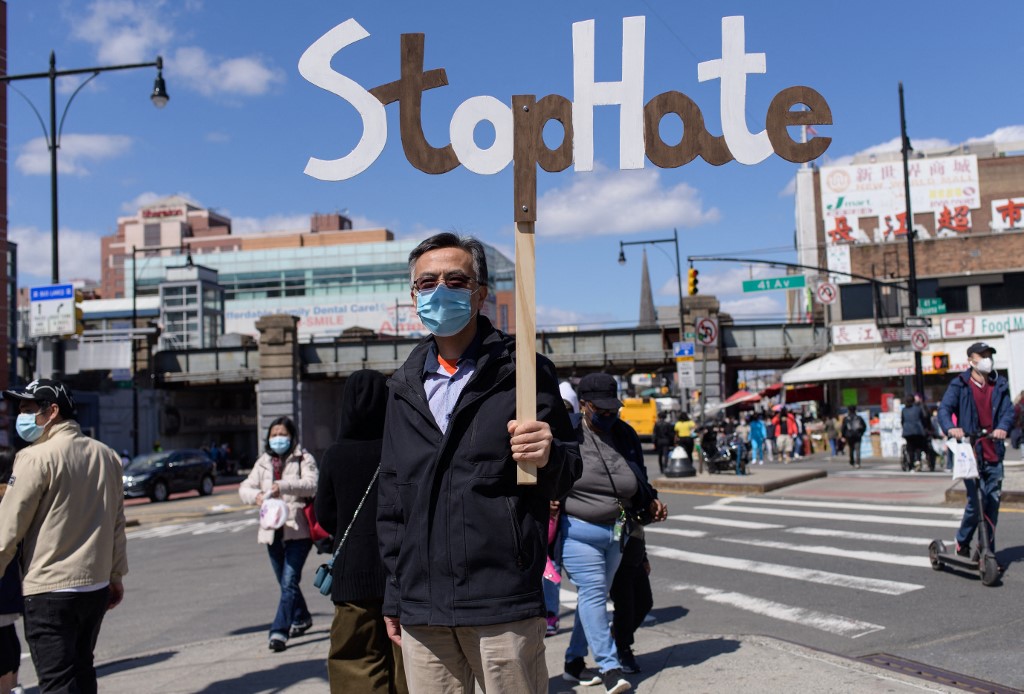 Members and supporters of the Asian-American community take part on the nationwide day of protests against anti-Asian violence in the Queens borough of New York on March 27, 2021. (Photo: AFP)

NEW YORK, March 27 (Xinhua) -- Hundreds of New Yorkers from different races on Saturday afternoon rallied against racism and violence on Asian Americans, according to U.S. anti-racism and anti-war organization the ANSWER Coalition.

The protesters rallied and marched in Flushing, a major Asian community in Queens borough of New York City. A number of speakers shared their personal stories about racism and violence, while participants chanted slogans for much of the time.

The rally in New York was held simultaneously with those from over 60 cities in more than 25 states across the United States, all aiming to stop anti-Asian violence and China-bashing, said the ANSWER Coalition.

"The opportunistic scapegoating of China during the onset of the COVID-19 pandemic, coupled with the intensity by which China is deemed the enemy and adversary of the United States, has driven a widespread Sinophobic sentiment nationally," said the organization.

The Asian American community suffers the brunt of the hatred fomented as a weapon of war, it added.

Jordan Wolf, who teaches at the Flushing International High School, said that as neighbors, friends and students, Asians deserve respect and safety.

Everyone should feel safe here in New York, and "there's no excuse for that kind of hatred or vitriol being given to anybody," said Wolf.

The police should have a better presence in the neighborhoods to make sure everyone is feeling safe, said Wolf, adding it was good for the police to be present at the rally and show their support. The root causes of hate against Asian Americans are prejudice and desire to treat "people different from you as not your own flesh and blood" but rather as objects, said Ray Low, an Asian American pastor working in Manhattan. "White supremacy is a scourge on this earth and to all people. It needs to be dismantled in order for us to live healthier, happier, more protected lives," said Samantha Evangelis, a second-generation immigrant in New York. White supremacy is built into systems and structures. It is a living, breathing thing, and that is why "we need to put in policy, and we need to break it down and rebuild it from the ground up," said Evangelis.It is important for everyone to continue coming out and speaking up, she said, adding, "when we're silent in these matters, we are complicit."New Yorkers have held more than ten rallies since the shootings in Atlanta, Georgia on March 16, in which six Asians were killed.