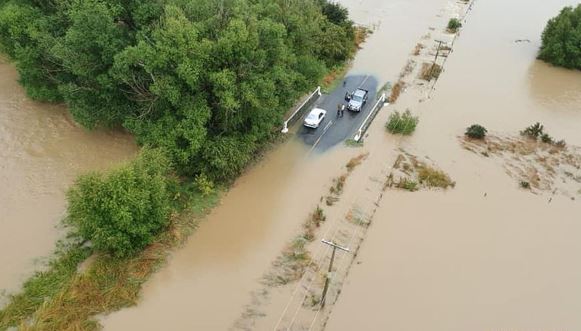 Photo taken from a helicopter on Feb. 4, 2020 shows a view of the flood-hit area on South Island in New Zealand. (Photo: Xinhua)

WELLINGTON, Feb. 5 (Xinhua) -- Several towns in Southland and Otago regions in New Zealand's South Island are being threatened by record level of flood water, for which the New Zealand government has declared an adverse event on Wednesday.

A state of emergency was declared earlier on Tuesday afternoon and remains on Wednesday for the Southland town of Gore.

Rising river levels in Southland had sparked evacuation orders in the town. The evacuation was extended to nearby three towns on Wednesday morning, with the river peaking in Gore and yet to reach maximum flow into other towns.

Police are asking motorists in Southland to take extra care on the roads due to flooding and road closures.

New Zealand Agriculture Minister Damien O'Connor has declared an adverse event on Wednesday for the Southland and Otago regions, unlocking government support for farmers and growers.

"Widespread flooding has resulted in severe disruption, with many people evacuated from their homes and many farms being affected by flood waters. It's putting pressure on our farmers," O'Connor said.

It is believed that the scale of impact is beyond local communities' ability to cope. The declaration of an adverse event unlocked extra funding of 100,000 New Zealand dollars (about $64,830), helping to speed up the recovery of farming businesses, including pastoral support and specialist technical advice.

"We'll continue to assess whether further funding is needed as the full extent of the impact becomes more apparent over the next few days and weeks," said O'Connor when visiting the flooded regions on Wednesday.