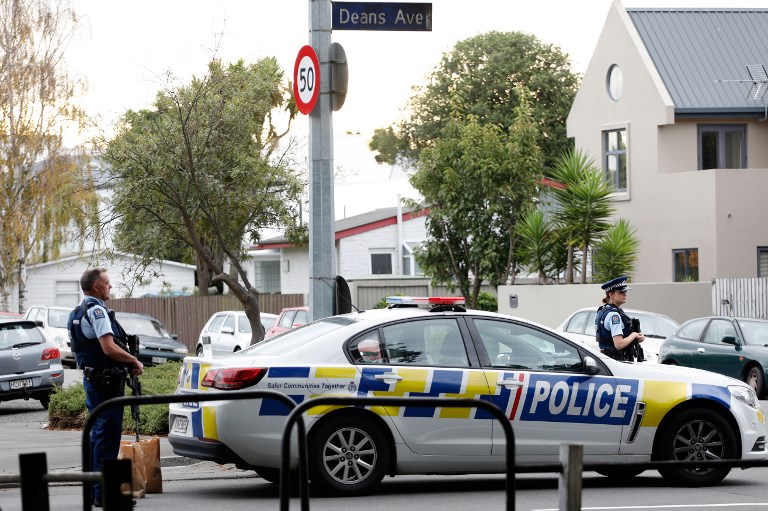 Police officers secure the area in front of the Masjid al Noor mosque after a shooting incident in Christchurch on March 15, 2019. (Photo: AFP)

An Australian gunman whose assaults on two New Zealand mosques Friday left at least 49 people dead, published a racist manifesto on Twitter before livestreaming his rampage.

The New Zealand government said it could be illegal to share the video, which showed the gunman repeatedly shooting at worshippers from close range.

The Facebook Live video, taken with a camera that appeared to be mounted on the gunman's body, shows a clean-shaven, Caucasian man with short hair driving to the Masjid al Noor mosque in central Christchurch.

He enters the building and fires repeatedly at worshippers as he moves from room to room.

AFP determined the video was genuine through a digital investigation that included matching screenshots of the mosque taken from the gunman's footage with images available online showing the same areas.

The "manifesto" detailing motivations for the attack was posted on Friday morning onto a Twitter account with the same name and profile image as the Facebook page that streamed the attack.

In the video, the shooter parks his car next to the mosque and gets out of the vehicle with a rifle. He slowly goes to the boot of his car and retrieves another firearm.

He then walks into the compound of the mosque and fires at a person standing near the doorway before dropping the rifle and shooting repeatedly with the second weapon as he moves inside.

The gunman fires dozens of bullets at people trying to run away or lying down in huddled groups in corners of the rooms.

In the excerpt of the video viewed by AFP, which did not appear to be the full clip, he can be seen changing cartridges three times in just under two minutes.

The framing of the video, which shows only the gunman's hands holding the gun as he shoots and reloads, is eerily similar to the style of a first-person shooter video game.

AFP is not publishing the footage.

In the 74-page manifesto entitled "The Great Replacement", the gunman details his intention to attack Muslims.

The title of the document has the same name as a conspiracy theory originating in France that believes European populations are being displaced in their homelands by immigrant groups with higher birth rates.

The gunman identified himself as an Australia-born, 28-year-old white male from a low-income, working-class family.

He said that key points in his radicalisation were the defeat of the French far-right leader Marine Le Pen in 2017 elections, and the death of 11-year-old Ebba Åkerlund in the 2017 Stockholm truck attack.

Australian Prime Minister Scott Morrison on Friday confirmed the attacker at the Masjid al Noor mosque was an Australian.

"We stand here and condemn, absolutely the attack that occurred today by an extremist, right-wing, violent terrorist," Morrison said.

New Zealand authorities said that three people had been arrested, but their identities were not made public. They later announced one man, aged in his late 20s, had been charged with murder and would appear in court on Saturday.

The gunman spoke only occasionally while in the car, with what sounded like an Australian accent. Satellite navigational audio could also be heard in the video as he drove to the mosque.

Distinctive writing on his weapons was seen in the footage as well as images posted on the Twitter account.

Scrawled in English and several Eastern European languages were the names of numerous historical military figures -- many of them Europeans involved in fighting the Ottoman forces in the 15th and 16th centuries. A few took part in the Crusades, centuries earlier.

"We're also removing any praise or support for the crime and the shooter or shooters as soon as we're aware."

A spokesman for New Zealand's interior ministry said the video is likely to be classified as objectionable content under local law, and could be illegal to share.

"The content of the video is disturbing and will be harmful for people to see," he said. "This is a very real tragedy with real victims and we strongly encourage people to not share or view the video."