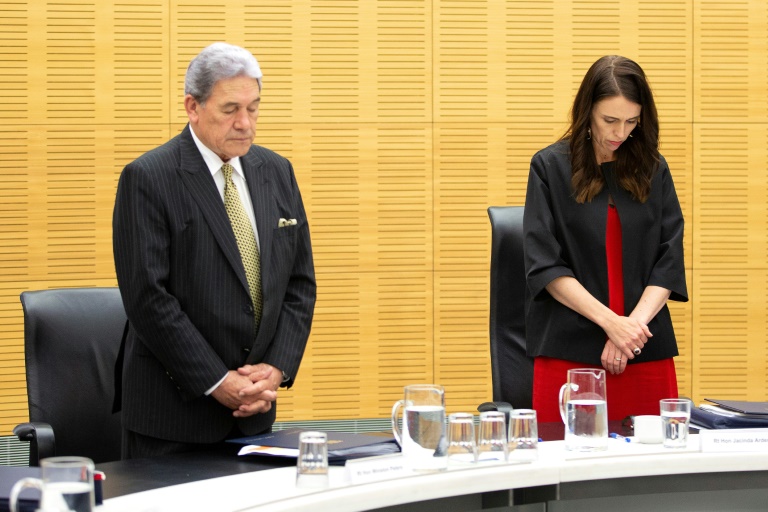 At 2:11pm (0111 GMT) -- exactly a week since the eruption -- offices and shops fell silent as New Zealanders remembered the 16 international tourists and two local guides who died, along with at least 18 more now receiving intensive treatment for severe burns.

Flags flew at half-mast outside Wellington's distinctive "Beehive" parliament building, while inside Ardern suspended a cabinet meeting and stood head bowed to reflect quietly on the disaster.

"Our thoughts continue to be with the families of those who have passed and those who are injured," she said.

A total of 47 day-trippers and guides were on the island at the time, hailing from Australia, the United States, Britain, China, Germany, Malaysia and New Zealand.

Whakatane mayor Judy Turner said authorities took grieving families out on boats to within a safe distance of the volcanic island to mark the event.

However, Ardern it would take time to determine why tour operators were allowed to take travellers onto the rim of an active volcano just days after scientists had raised its eruption threat level.

She said officials had advised her that a probe by workplace regulator WorkSafe New Zealand may take a year and a separate coronial inquiry was "also likely to continue for some time".

"Look, as we've seen, inquiries can sometimes take more than that time, so it's not for me to judge whether that's an appropriate time frame," she said.

"They need to do their job properly and it needs to be properly considered."

Under New Zealand workplace law, individuals can face a maximum three years jail for reckless conduct resulting in death, while companies can be fined NZ$3.0 million (US$2.0 million).

Police on Monday released the names of another four fatalities.

It brings the number of Australians identified as fatalities in the eruption to eight, along with two US citizens who had permanent residency in Australia.

Special forces troops retrieved six bodies from the island last Friday but the remains of two people have still not been found, despite a second land search on Sunday.

Police commissioner Mike Bush said they were believed to be in the water off White Island, so helicopters and divers would be deployed to aid the search.

"We've been working with all the experts, including the harbour master who knows those waters better than anyone, to try to predict where those persons might be," Bush told RNZ.

"We will continue the operation for as long as we have a chance of recovering those bodies," he said, adding in a separate interview to Auckland radio station Magic "it can take days and weeks".

Many of those affected were passengers on the cruise liner Ovation of the Seas, which berthed in Sydney early Monday.

"(It was) a bit sombre," Australian man Troy, who did not give his surname, told Channel Nine television after completing the voyage across the Tasman Sea.

"The crew were really good and trying to stay upbeat but you could tell they were hurting. I think the captain was breaking down crying a fair bit."