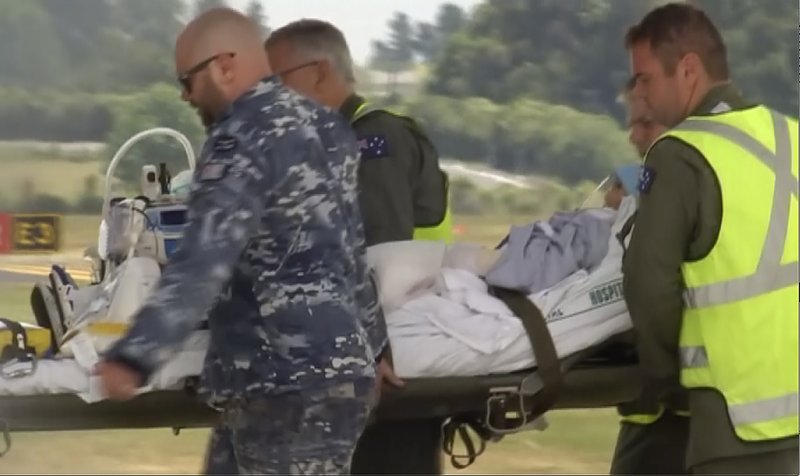 In this image made from video, an injured tourist in the volcano eruption is carried to an Australian Air Force plane in Hamilton, New Zealand, Dece,ber 12, 2019. New Zealand officials say they'll begin Friday to recover eight victims' bodies believed to remain on a small island since a volcanic explosion there earlier this week. (Photo: AP)

A team of eight New Zealand military specialists will land on a small volcanic island early Friday to attempt to retrieve the bodies of eight victims of an eruption that claimed eight other lives.

New Zealand police said late Thursday the recovery attempt will go ahead even though scientists believe another eruption is possible on White Island. Steam and mud are being emitted from its active vents and volcanic tremors are rising, volcanologists said.

Police, military, volcano experts and others will monitor the recovery attempt from the HMNZS Wellington, which will be stationed nearby, authorities said.

“They will go onto the island and they will make every effort to recover all of the bodies,” Clement said at a news conference.

The continuing volcanic activity has delayed the recovery of the last victims since Monday’s deadly eruption, which occurred as 47 tourists and their guides were exploring the island. In addition to the bodies left on the island, eight other people were killed and dozens were severely burned by the blast of scalding steam and ash.

Police have cited the need to preserve evidence that would help identify the victims as a reason to take a methodical approach, but the decision to make a faster recovery attempt appeared to have been partly motivated by weather forecasts.

Rain mixing with the heavy volcanic ash lying on the island could encase the bodies in a cement-like substance, making recovery more difficult.

“My concerns remain the weather, the direction of the wind, the sea state because they all bring risk and add complexity,” Clement said.

New Zealand medical staff were working around the clock to treat the injured survivors in hospital burn units.

The enormity of the task was clear when Dr. Peter Watson, a chief medical officer, said at a news conference that extra skin has been ordered from American skin banks. Hospital personnel anticipated needing an extra 120 square meters (1,300 square feet) of skin for grafting onto the patients, Watson said.

Australian tissue banks have sent 2 square meters (21 square feet) to New Zealand to help the survivors. “Skin is predominantly used in patients who have the most life-threatening burns, usually if they have more than 50% burn over their body,” said Stefan Poniatowski, head of Donor Tissue Bank Victoria.

A patient with that amount of burned skin doesn’t have enough of their own healthy skin to transplant onto the wounded area, he explained. Additionally, in patients with an infection, creating a new wound to transfer their own skin is too risky, Poniatowski said.

Authorities say 24 Australians, nine Americans, five New Zealanders, four Germans, two Britons, two Chinese and a Malaysian were visiting the island at the time of the eruption. Many were from a Royal Caribbean cruise ship that had left Sydney two days earlier.

Australian Prime Minister Scott Morrison said 10 Australians were presumed among the dead. Twelve of the injured Australians were being medically evacuated to Australian hospitals for further treatment with one Australian patient staying in a New Zealand hospital, he said at a news conference Thursday.

White Island is the tip of a mostly undersea volcano that’s about 50 kilometers (30 miles) off New Zealand’s North Island and has been visited by thousands of tourists each year.