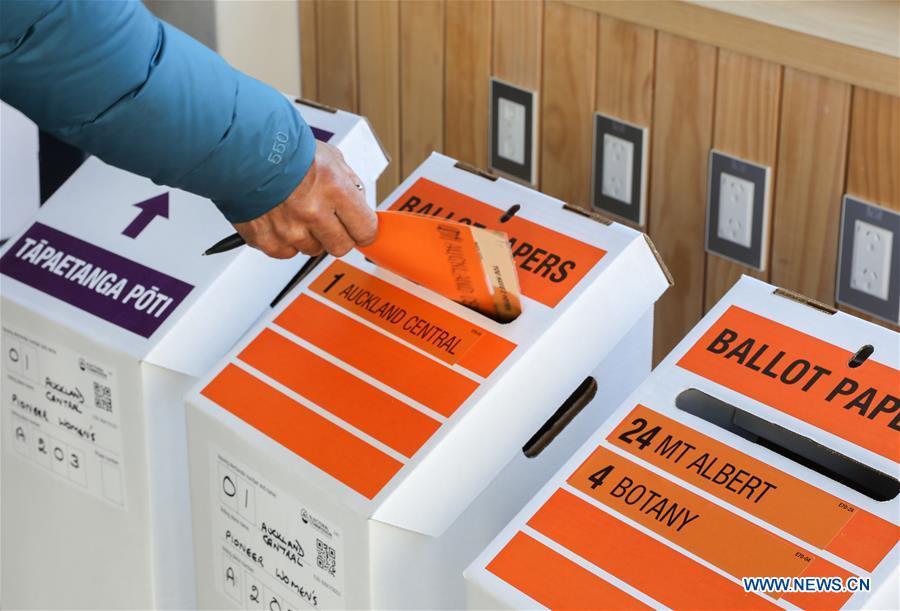 On Saturday morning, Prime Minister and Labour Party leader Jacinda Ardern cast her vote with fiancé Clarke Gayford in Auckland. Ardern later confirmed to the public that she voted for the Labour Party.

Voting places across New Zealand opened their doors from Saturday for voters to cast their advance votes for the 2020 General Election and referendums.

In the New Zealand 2020 General Election and referendums, besides voting for the 53rd New Zealand Parliament, voters can also vote in two referendums, including the End of Life Choice referendum and the Cannabis Legalisation and Control referendum.

Chief Electoral Officer Alicia Wright from the New Zealand Electoral Commission said that the popularity of advance voting has been rising steadily, which accounted for 47 percent of all votes in 2017, and was expected to reach as much as 60 percent in this year's election.

"Our message is to vote early and vote local because it's more convenient and minimises election day queues, which lessens the risk of COVID-19," said Wright.

"We'll still be running the election as though the country were at Alert Level 2, so there will be physical distancing, use of hand sanitizer, voluntary contact tracing, single-use pens to mark voting papers, and personal protective equipment on hand for staff in case it's needed," said Wright.

Arrangements are in place for people in hospitals, rest homes, remand centres, prisons, managed isolation or quarantine facilities and overseas to cast their vote. Postal voting and takeaway voting are available to those unable to get to a voting place, according to the Electoral Commission.

New Zealand uses the Mixed Member Proportional (MMP) voting system to elect its Parliament. Under this system, the government is usually formed by two or more parliamentary political parties.

For the 53rd New Zealand Parliament to be elected in this election there will be 120 members of parliament plus any overhang seats, including 72 representatives for 72 geographical electorates and the rest seats from political party lists.

Each voter gets two votes. The first vote is for the political party, and the second vote is to choose the MP the voter wants to represent the local electorate they live in. Under current MMP rules in New Zealand, a political party that wins at least one electorate seat, or five percent of the party vote, gets a share of the seats in Parliament. This share is about the same as its share of the party vote.

New Zealand citizens or permanent residents of 18 years or older, who have lived in New Zealand continuously for 12 months or more at some time in their life, are eligible to vote in the election.