WELLINGTON, March 25 (Xinhua) -- New Zealand is still reeling from the nation's worst terrorist attack, in which a gunman killed 50 people and injured 50 others at two mosques in Christchurch on March 15.

While hundreds of thousands of people mourned the victims across the country, many have asked what can be done to prevent such tragedy from occurring again. 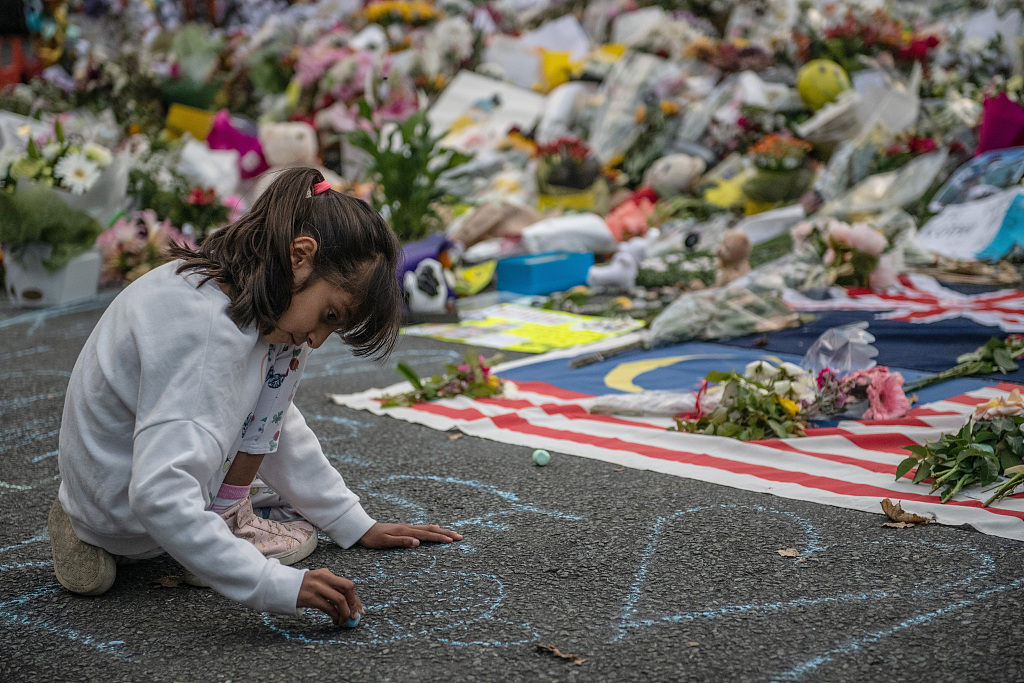 A young girl writes a message on the ground with chalk next to flowers and tributes near Al Noor mosque on March 19, 2019 in Christchurch, New Zealand. (Photo: VCG)

"On 15 March our history changed forever. Now, our laws will too," Prime Minister Jacinda Ardern said on Thursday while announcing procedures to overhaul gun laws to make New Zealand "a safer place."

Under the tougher new laws, military style semi-automatic weapons, assault rifles, related parts as well as all high-capacity magazines will be banned in the country.

A Select Committee will be set up in the parliament to fast track the legislation.

The ban on semi-automatic weapons took effect immediately to restrict the potential stock-piling of these guns and encourage people to continue to surrender their firearms.

Legislator Raymond Huo, also chair of the parliament's Justice Committee, told Xinhua that the order is a transitional measure until the wider ban takes effect. The Arms Act 1983 stipulates that the government can ban guns through administrative orders.

Over the past week, gun owners in New Zealand have started to hand in their semi-automatics voluntarily to the police for destruction. The government is also working on a buyback program.

Ardern said Australia, after the Port Arthur massacre in 1996, had changed its laws in 12 days, and New Zealand would do it in less. The swift ban was imposed six days after the tragedy, and the cabinet agreed to overhaul the law when it convened 72 hours after the mass shootings.

"The killer's gun was purchased legally and that's part of the issue. Once you obtain a license you can purchase a lot of firearms and there is no record of how many firearms you actually own," New Zealand Police Association President Chris Cahill told Xinhua.

There are around 240,000 licensed firearm owners in New Zealand, a nation of 4.8 million people. As one of the highest per capita gun ownership countries in the world, a nationwide gun registry will possibly be considered in the upcoming overhaul of the gun laws.

David Tipple, owner of Gun City, New Zealand's largest gun dealer which sold the alleged killer, Brenton Tarrant, ammunition and four firearms between December 2017 and March 2018, said he did not feel in any way responsible for the tragedy.

Tipple said the suspect had a legitimate A-class gun license when he made the purchase.

Although obtaining a firearm license in New Zealand is "a stringent process at some level," Cahill said 99.3 percent of all applicants get their gun license approved.

Any topic related to guns has become quite sensitive recently in this country, as New Zealand's largest gun show, an annual event which has been held for the past five years, was cancelled in respect for the victims of the horrific attack amid elevated security risks.

Many people have voiced their support for the gun law reforms. A petition calling for stricter gun control collected more than 90,000 signatures in 48 hours.

"The gun law of New Zealand in some way is outdated," said Caleb Vuli, a student of the University of Canterbury.

A British writer residing in New Zealand who prefers not to be named told Xinhua that he was surprised at the easy access to semi-automatics in the country, saying that gun control laws should be stricter.

"There is no valid reason to own fully- or semi-automatic weapons in New Zealand," said Al Lowe, an IT professional in Auckland.

"All weapons should be licensed, recorded on a national gun register and secured in a locked cabinet inspected every six months. Failure to adhere to rules would see gun licenses revoked," he suggested. "Any police record should prevent ownership of a gun."

While shocked by the heinous massacre, many people are also irked and upset by the attacker's shooting streamed live on major social media platforms worldwide.

The alleged shooter, a 28-year-old Australian man, appeared to have uploaded images of the weapons days before the attack and an announcement an hour before his action.

The man posted his 74-page manifesto on 8chan, a U.S. imageboard website, and Twitter, propagating his supremacist ideology. He also live-streamed the mass shootings on Facebook for 17 minutes before the platform suspended his account and deleted the massacre video.

Facebook said it has removed 1.5 million copies of the video in the first 24 hours after the shootings.

It is also a huge challenge for New Zealand's Internet service providers to stop the spreading of footage by identifying the websites distributing it and block their access.

"This is not just an issue for New Zealand ... All of us need to present a united front," Ardern told the media last week.

"It is unacceptable to treat the Internet as an ungoverned space," he wrote in a letter to Group of 20 Chairman and Japanese Prime Minister Shinzo Abe.

"It is imperative that the global community works together to ensure that technology firms meet their moral obligation to protect the communities which they serve and from which they profit," he wrote.

Former New Zealand Prime Minister Helen Clark said Facebook had demonstrated the inability to self-regulate after the massacre that was live-streamed by the murderer.

"Seventeen minutes of a killer doing his business. A mass murder. This is unthinkable," Clark told local media The Spinoff on Sunday.

With extremism and terrorism deeply penetrating into social media, analysts said it is far from enough to simply rely on the technology giants themselves to regulate the content on their platforms.

Similar attacks elsewhere also arouse a huge outcry from the public for more legislative powers injected into the supervision on social media.

Over the past 10 years, there is not a single mention of the threat posed by white supremacists or right-wing extremism in public documents of the Security Intelligence Service (SIS), or the Government Communications Security Bureau (GCSB), according to a report by the Radio New Zealand (RNZ).

The SIS said the accused gunman had "never been brought to (its) attention" and was not known to the GCSB, New Zealand's two spy agencies, or their Australian counterpart.

Ardern said an inquiry will look into the Christchurch attack to help make New Zealand a safe environment by ridding the country of racism and extremism.

The government will also launch a high-level probe into whether security agencies ignored warning signs, or put too much focus on the threat of Islamic extremism, reported the RNZ.

One of the measures proposed to track extremist behaviors is a national database for hate crimes.

"Something that has come to light in New Zealand is that Muslims, not just in Christchurch but elsewhere, have been saying for some time they've been experiencing hateful incidents and things that may even constitute hate crimes," said Greg Barton, an expert in countering violent extremism from Australia's Deakin University.

"But the problem in New Zealand as well as Australia is that there's no way to collect these reports, catalogue them in a standard way, share them with all agencies, spot patterns and act on them," Barton said.

"So I think one of the needs in Australia and New Zealand is a national hate crimes register," Barton added.

The attack in New Zealand on people of more than 200 ethnicities speaking more than 160 languages, is a wake-up call for the world, said legislator Huo.

"The fight against terrorism and extremism cannot be done by one country or organization. All countries, regions and people should form a united front against the threats," he told Xinhua.