CANBERRA, Australia (AP) — Australia’s next Prime Minister Scott Morrison is widely regarded as a conservative who respects moderates and is well placed to heal the civil war within the party that brought him to power. 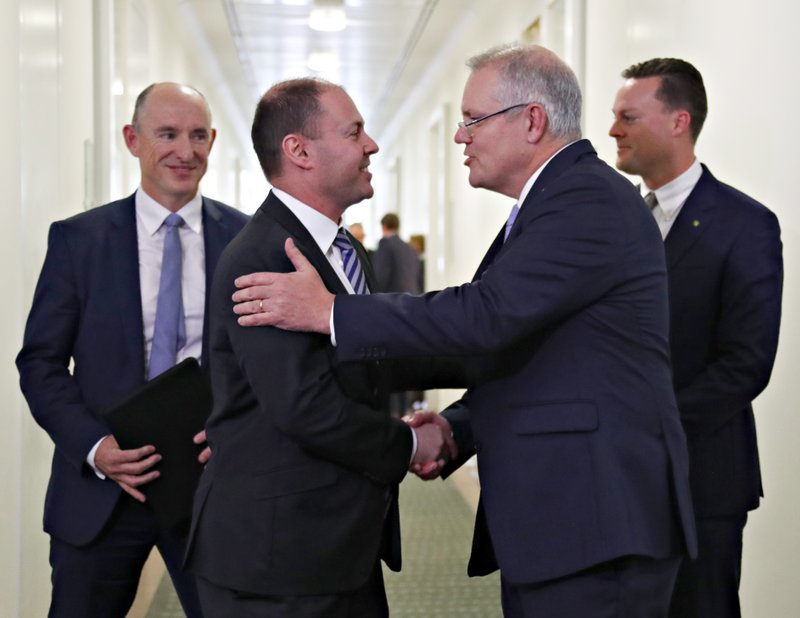 Treasurer of Australia Scott Morrison, second from right, is congratulated by Environment Minister Josh Frydenberg, second from left, after a party meeting in Canberra, Australia, Friday, Aug. 24, 2018. Australia government lawmakers on Friday elected Morrison as the next prime minister in a ballot that continues an era of extraordinary political instability. (Photos:AP)

Morrison is treasurer, the most coveted government office after prime minister, and was regarded as the best economic manager among the candidates. He had told colleagues that he would not run for party leader against Prime Minister Malcolm Turnbull. So Turnbull’s decision to quit meant Morrison could not be accused of disloyalty.

“The only tip I’ve got is Sharks to beat Newcastle,” Morrison told reporters, referring to a weekend match, as he entered the room where his conservative Liberal Party colleagues elected him their leader in a secret ballot on Friday.

His tough stance on asylum seekers in government bewildered some observers, given his devout Christian beliefs.

Morrison rose to public prominence when the conservative coalition government was first elected under Prime Minister Tony Abbott in 2013 as the minister who stopped asylum seekers from attempting to reach Australian shores by boat.

Australia uses the navy to turn boats back to Indonesia, or banishes refugees to remote immigration camps on the poor Pacific island nations of Papua New Guinea and Nauru.

The policy has been widely condemned as a callous abrogation of Australia’s international obligations to help refugees.

Morrison explained his deep belief in the righteousness of crushing the people-smuggling trade and preserving the safety of people who board rickety boats to take the long and treacherous voyage to Australia.

But his empathy came under question when he criticized a former government’s decision in 2010 to pay asylum seekers to fly from a remote Christmas Island camp to Sydney to attend funerals after 48 died in a boat disaster.

Morrison has a reputation as a powerbroker within the Liberal Party whose support has been crucial to previous Liberal Party leaders.

In his first speech to Parliament in 2007, Morrison said: “So what values do I derive from my faith? My answer comes from Jeremiah, chapter 9:24: I am the Lord who exercises loving kindness, justice and righteousness on earth; for I delight in these things, declares the Lord.”