WORLD NGO ship with migrants barred from docking in Italy

NGO ship with migrants barred from docking in Italy 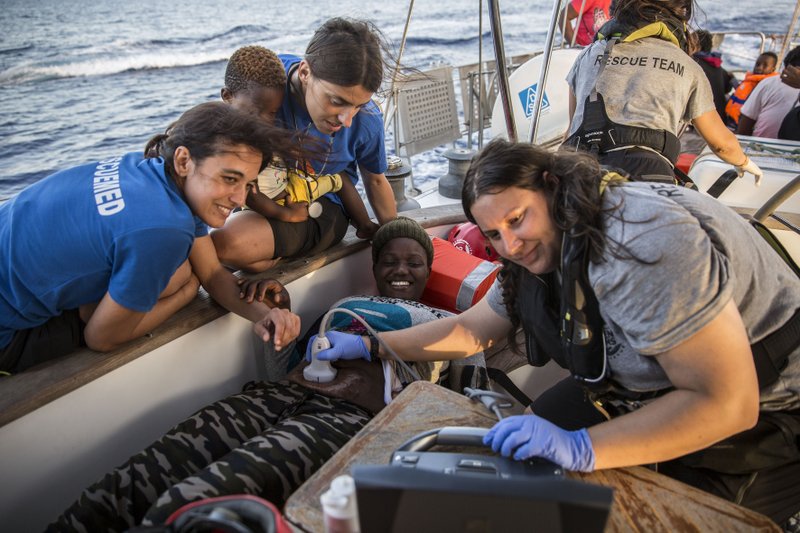 An Italian humanitarian group whose boat has been barred from docking in Lampedusa said it is waiting for about 40 migrants still onboard to be transferred to Malta on military patrols, a move that could possibly avert another standoff with Italy’s populist government.

Mediterranea Saving Humans said Friday in a tweet that its sailing boat ALEX was just outside Italian territorial waters, just off the southernmost island of Lampedusa, and that it has been banned from entering Italian jurisdiction by ministerial decree.

However, due to their fragile health, 13 migrants were taken off disembarked by an Italian coast guard boat and taken to Lampedusa. Three pregnant women were given ultrasounds before being allowed off the boat. Four children and one unaccompanied minor were part of the group allowed to disembark.

Malta said Thursday that it will take the migrants in a deal with Italy to take an equal number already in Malta. The deal appears aimed at avoiding what would be the 21st standoff between Italy’s populist government and humanitarian groups rescuing migrants at sea.

The NGO said the ministerial decree is illegitimate because it can’t be applied to a ship carrying people rescued at sea, and because Italy can’t ban an Italian-flagged ship from entering its waters.

Meanwhile, German humanitarian group Sea-Eye said one of its rescue ships has picked up 65 people who were found in a large dinghy about 34 miles (55 kilometers) off Libya’s coast.

Sea-Eye said on its Facebook page that the crew of the Alan Kurdi brought the African migrants on board their vessel early Friday. It added that Libyan authorities failed to respond to communication for more than three hours. It was unclear whether the Alan Kurdi will try to dock in Italy too.

Italian Interior Minister Matteo Salvini said Friday that none of the rescued migrants will arrive in Italy. Referring to the Alan Kurdi ship, he said “the German NGO can choose between Tunisia and Germany.”

Last Saturday, a 17-day standoff between Italy and a rescue ship ended when the German captain defied orders and forced her way to a dock in Lampedusa’s main port. She is under investigation for disobeying orders and allegedly aiding illegal immigration and her lawyer said she has sued Salvini for defamation.

Italy has insisted that the Libyan coast guard intervene and the migrants be taken back to Libya. NGOs say that would be against maritime law since Libya is not considered a safe harbor, as evidenced by the bombing of a migrant center this week that killed dozens.

Italy argues that the presence of the ships encourages smugglers and that Italy has been unfairly stuck with the burden of managing arrivals from northern Africa for the rest of Europe.

Salvini, speaking from the northeastern city of Trieste, said Friday that Italy is ready to use more resources to “seal the border with Slovenia and definitively stop the entrance of illegal migrants.” But he stopped short of mentioning a plan to build an anti-migrant wall along the Slovenian border, previously mentioned by the League’s regional governor.