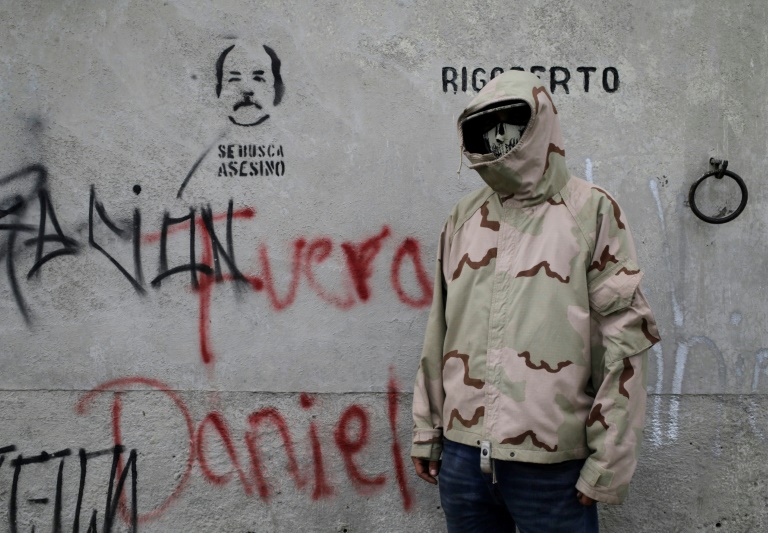 A student poses next to graffiti that reads "Daniel get out!" in allusion to the embattled President Daniel Ortega.(Photo: AFP)

A national strike got underway Thursday in Nicaragua to protest the government's deadly crackdown on a two-month long popular uprising against President Daniel Ortega, hours after the Church moved towards rekindling talks to calm the crisis rights groups say has killed at least 152 people.

Anticipation of the "peaceful" nationwide 24-hour work stoppage that began at 12:00 am (0600 GMT) had meanwhile triggered a mad dash to gas stations and supermarkets to stockpile grain, milk and vegetables.

Jorge Esquivel, 60, voiced support for the strike -- to include all sectors besides those "related to the preservation of life and the coverage of basic services" -- called by a coalition of student, business and other civic representatives, one of the main groups involved in the now-stalled talks.

He told AFP as he left a supermarket that "we have to make this sacrifice; in one day we will not die of hunger."

Hours prior to the strike's opening bell Nicaragua's influential bishops announced they would convene opposing government and civil representatives on Friday in a bid to revive negotiations aimed at ending the sociopolitical chaos plaguing the country.

In a statement the Catholic clergy said they would present both their mediation offer to Ortega along with his answer, which the country has been anticipating for a week amid a sharp escalation in violence.

The bishops said the proposal and response would go up for debate "to seek a consensus that responds to the people's longing for justice, democratization and peace."

The Church previously called off negotiations after a protest led by victims' mothers was met with violent repression last month.

Since then the Central American country has seen an uptick in police and pro-government paramilitaries attacking activists armed with slingshots and homemade mortars in an attempt to trample the anti-Ortega unrest.

"The IACHR strongly condemns the exacerbation of the excessive use of state force and the continuity of attacks by parapolitical actors and armed third parties, which the State has the obligation to dismantle," the commission's statement read published late Wednesday.

Mario Arana, director of the country's Association of Producers and Exporters, estimated the strike would result in a $25 to $30 million economic loss.

The private sector, once an Ortega ally, broke ties after the president unilaterally approved the ultimately scrapped bid to reform social security -- which initially triggered the civil unrest that began April 18 and exploded into a mass effort to pressure the president's exit.

Mediating the crisis "has taken more time than the situation really justifies," Arana said. "The population is being repressed and this strike is to express discontent."

Activists have erected blockades on more than two-thirds of the country's roads in a bid to fend off Ortega-backed forces.

But the makeshift roadblocks have wreaked economic havoc: even in the unlikely scenario that the government "accepts an early negotiated exit" by the end of July, the Nicaraguan Foundation for Economic and Social Development (FUNIDES) estimates the country would post losses of $404 million and bleed 20,000 jobs.

FUNIDES anticipates Nicaragua would lose $916 million in added value and 150,000 jobs by December if Ortega stubbornly stays in office and protests continue.

Facing violence from government-backed forces, some Nicaraguans appear ready to take up arms.

"For me, what is happening is a staggered civil war," said a student leader known as "El Gato" who is among the hundreds who have occupied Managua university grounds in protest for more than a month.

"Most of us don't want to see it like that, but personally I think there is going to have to be a moment in this story when we're going to have to arm ourselves to be on the same level as them," he said.

Friends and relatives of women who lost their sons in the recent protests hold a banner that reads "We demand justice, we want peace, we want them to leave... to leave" during a protest demanding justice in Managua

Ortega's Sandinista guerrilla army ousted the Somoza dictatorship in 1979, and the leftist leader has remained a major political force ever since.

But even activists who had fought with Ortega are now turning on him and demanding he move up a presidential election slated for late 2021.

"El Gato," who masked his identity with a bandana, said Nicaragua was nearing a breaking point before the protests.

"For many years, I have been observing and keeping silent for fear of reprisals," the 25-year-old said.

"I believe that this fight is just," he continued, vowing to continue his struggle "as long as it takes."