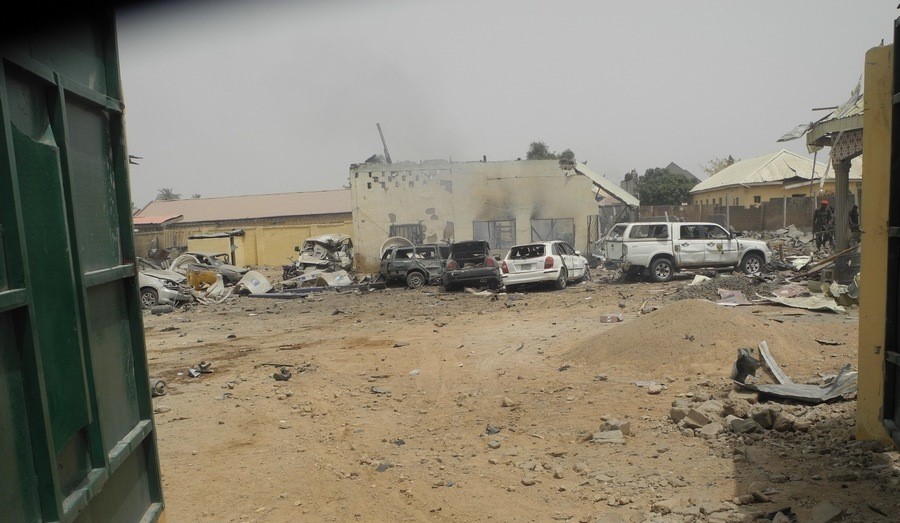 File photo taken on Feb. 25, 2016 shows the damaged vehicles and building affected by the blast in Adamawa, Nigeria. (Photo: Xinhua)

ABUJA, July 23 (Xinhua) -- Nigeria has confirmed seven people killed and seven others wounded following a suicide attack on a local mosque in the northeastern state of Borno early Monday.

The wounded have been evacuated to a local hospital in Maiduguri, the capital of Borno, said Bello Dambatta, head of rescue operations at the State Emergency Management Agency.

The remains of the male suicide attacker who wreaked the havoc were among those evacuated from the scene of the attack in Konduga, 43 kilometers to Maiduguri, Dambatta told reporters.

The attacker had entered the mosque during the morning prayer, pretending to be a worshipper before detonating the improvised explosive device strapped to his back, said Dambatta and local residents who witnessed the attack.

Ali Kolo, head of a local vigilante group in Konduga, said a child was among the wounded victims.

"It is not clear how the suicide bomber infiltrated the town and attacked the mosque," Kolo said, adding the building collapsed during the explosion, and the victims were evacuated from the rubble.

Local residents, however, said 11 dead bodies were evacuated due to the magnitude of the blast.

Yunusa Bello, a resident who witnessed the blast, said all of the victims were worshippers at the mosque.

Bala said he saw bodies of seven of the victims who died inside the mosque, while two bodies were found at the entrance of the building.

Hospital sources told Xinhua by telephone that the victims were admitted at the emergency unit of the facility.

No group has claimed responsibility for the blast but local residents suspected the Nigeria-based terror group Boko Haram, which launched its bloody campaign in 2009 to have carried out the attack.

Despite the efforts by the government and the armed forces to destabilize the group, Boko Haram has been attacking soft targets recently, mostly in the northeast region of the country.