WORLD Nigeria's Buhari to run for re-election next year

Nigeria's Buhari to run for re-election next year 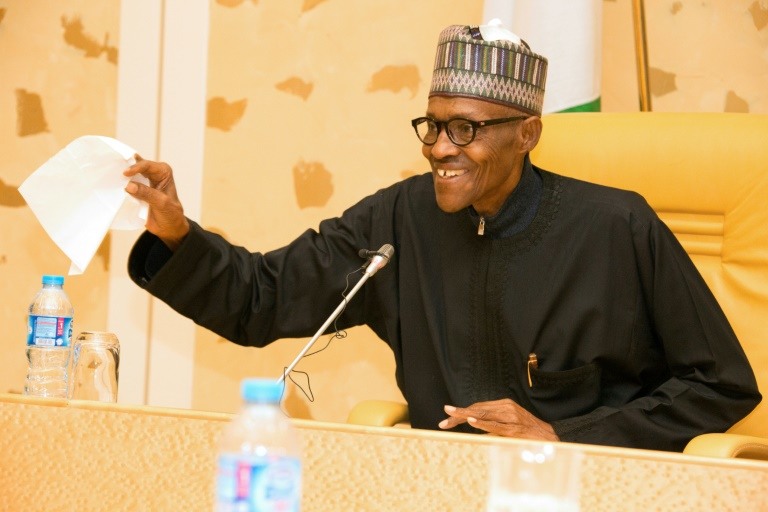 Nigerian President Muhammadu Buhari declared Monday he would seek re-election next year, in a move that put an end to months of speculation amid concerns over his health.

The 75-year-old former general and one-time military head of state made the announcement in the national capital Abuja following a meeting with the national executive of the ruling All Progressives Congress (APC) party.

Buhari, nicknamed "Baba Go Slow" for his lethargic pace in office, will have to convince his divided party he is fit to run after spending months in London last year seeking medical treatment for an undisclosed illness.

If nominated, he faces the Herculean task of convincing Nigerians he is the best candidate to steer the country out of its worst recession in 25 years after implementing a series of unorthodox policies blamed for worsening the economic crisis.

"President @Buhari has just announced his intention to seek the presidential ticket of the All Progressives Congress (APC) and contest for a second term of Office in the 2019 elections," the presidency said on Twitter.

"Victory is sure by the grace of God and together we must continue to sanitise Nigeria's political environment," said Buhari in a statement.

Buhari was voted into power in 2015 on a platform vowing to crack down on endemic graft and stamp out the Boko Haram jihadist insurgency ravaging the country's northeast.

His disciplinarian reputation enamoured him to voters fed up with politicians living the high life while roads crumbled and electricity sputtered.

The shine came off Buhari's leadership after his so-called war on corruption lost momentum, with many high-profile cases halted by endless adjournments.

In February, the Islamists embarrassed the government by driving unopposed into the northeastern town of Dapchi and kidnapping over 100 schoolgirls.

But arguably Buhari's biggest battle will be to prove that he can shepherd Nigeria to strong growth after a crash in oil prices caused the economy to collapse.

"It will not be as easy as it was in 2015," said political analyst Chris Ngwodo about Buhari's re-election bid.

"It will not be automatic, other people also want to run for the election and there is genuine discontent in the party."

In March, Buhari made his first official visit to Lagos, the country's teeming economic hub, to court Bola Tinubu, a political grandee who played a pivotal role in securing the key region for the APC.

It's no surprise that Buhari was there, explained Cheta Nwanze, from SBM Intelligence, a Lagos-based advisory firm.

"His main challenge will be to build a solid bloc within an APC," Nwanze said, adding "the big election issue will be the economy."

Buhari has been criticised for aggravating the recession by introducing a currency peg that spooked investors and depleted foreign reserves.

He will also have to answer to growing concerns about the escalating conflict between pastoralists and farmers that is claiming hundreds of lives in clashes across the country and stoking ethnic division.

"It's not just Boko Haram but the pastoral conflict," said Nwanze.

"Buhari should not come back because of his failing health," said Alfred Nyitse, an unemployed 30-year-old. "The man is too old for the job."

"I don't want the president to run again," said Ekwueme. "He was away in London for most of last year receiving treatment abroad. I have not seen any improvement."

Others were more enthusiastic.

"We want him to come back so that he can finish the good work he has started," said Remilekun Adeyemi, a trader.

"I like Baba very well," said Abdullahi Ali, a motor-cycle taxi driver. "My people will vote for him again because he is not a thief."