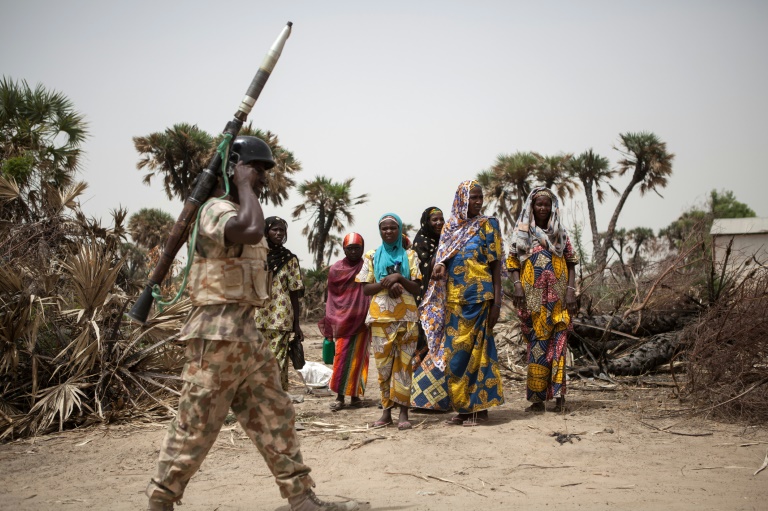 Nigeria is facing widespread unrest, from Boko Haram's Islamist insurgency in the northeast to a resurgence of violence in a long-running dispute over land and resources in central states(Photo:AFP)

Campaigners on Monday urged Nigeria to stop handing out millions of dollars to tackle unspecified security issues with no questions asked, arguing the practice fuels corruption and conflict.

Nigeria is facing widespread unrest, from Boko Haram's Islamist insurgency in the northeast to a resurgence of violence in a long-running dispute over land and resources in central states.

At the same time troops have been deployed to curb rising crime from cattle rustling and kidnapping gangs in the north, as well as to stop attacks on oil and gas infrastructure in the south.

Nigeria's defence budget is estimated to be some $1.2 billion (1.03 billion euros) this year -- but Transparency International (TI) estimated more than $670 million extra is handed out annually without proper oversight.

They also dwarf recent and promised US and British security and counter-terrorism assistance, TI said in a report, "Camouflaged Cash: How 'Security Votes' Fuel Corruption in Nigeria".

"Nigeria would arguably not need such assistance if it curtailed the use of security votes and reprogrammed them into the country's formal defence and security budget," it said.

The group's head of defence and security, Katherine Dixon, called security votes "one of the most durable forms of corruption operating in Nigeria today".

Instead of helping to end conflict, they provided corrupt officials with "an easy-to-use and entirely hidden slush fund", she added.

"Corruption in the crucial sector of defence and security plays right into the hands of those who seek to sow the seeds of instability and terror," she said.

"It leaves armed forces under-resourced in the fight against Boko Haram and feeds groups who may destabilise the elections."

President Muhammadu Buhari, a former military ruler, came to power in 2015 after promising to end the Boko Haram conflict and stamp out endemic graft and impunity in government.

He argued that corruption had left troops without adequate arms and ammunition to fight the jihadists, who in 2014 had run rampage across the northeast capturing swathes of territory.

One of his first acts as president was to order a probe into the opaque practices of defence procurement, which led to the arrest of former national security advisor Sambo Dasuki.

Dasuki is accused of using some $2 billion in defence funds earmarked for the fight against Boko Haram to help bankroll Goodluck Jonathan's re-election campaign against Buhari in 2015.

TI has previously said that Nigerian former military chiefs have siphoned off more than $15 billion from the country's defence sector.

Vice-President Yemi Osinbajo said the money was not only meant to help end the Boko Haram conflict but also tackle other security challenges, without elaborating.

The main opposition Peoples Democratic Party accused the ruling All Progressives Congress of planning to use the money to fund Buhari's bid for re-election next year.

TI said that the use of security votes had increased from 30 in the federal budget in 2016 to more than 190 this year, despite Buhari's promise of open government and anti-corruption.

"With the approach of the 2019 election, this abrupt increase should ring alarm bells for those overseeing Nigerian public spending," the report said.

TI said Buhari should curtail his government's use of the practice to demonstrate his seriousness about tackling graft.

It recommended that all candidates at next February's election should pledge to outlaw the practice and tighten legislative scrutiny of existing and planned expenditure.