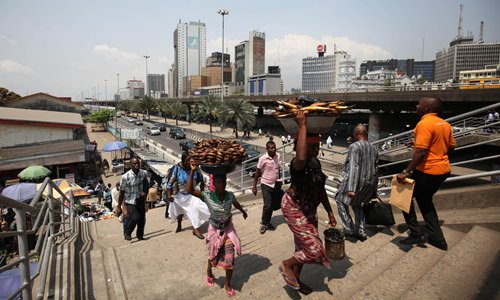 At first sight, Charles Okeke from Nigeria was impressed by China's booming economy when he arrived in 2005. The longer he stayed, the deeper his idea began to take root - that Nigeria should adopt a one-party socialist political system, which in his mind is the key to China's economic success.
Okeke spent two years researching and writing a book about this idea - Road to Prosperity: Advocating a One-Party System and a Socialist Economy in Nigeria - while acquiring a master's degree at a Beijing-based college.
Though Nigeria strikes many similarities with China, the need for Nigeria to adopt a one-party system is rooted in its own national situations, he said.
Nigeria has the largest population on the African continent and a great diversity of ethnicity and tribes. It currently runs a multiparty system, in place since the country's independence from British colonial rule.
"Since October 1, 1960, Nigeria has joggled between 'democratic governments' and military juntas who use the same democracy as an excuse to assume power," he wrote in the book. Nigeria will be better off if it could return to what he calls a "one-party" system of government it used to have before falling as a colony, Okeke advocates. 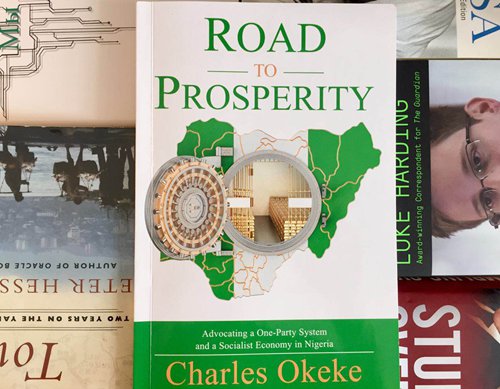 For the common good
This Global Times reporter first met with Okeke in downtown Beijing, where he arrived driving a Mercedes-Benz.
The 42-year-old is involved in a successful shipping business between China and Nigeria, but he says his true passion is political economics, which is why he went to the University of International Business and Economics in Beijing and acquired a degree in international relations.
Despite the generally stable situation in Nigeria, Okeke said democracy has proven a failure there. A fundamental problem with a multiparty system in a country like Nigeria, with more than 200 ethnic groups, is that people tend to align with parties of their own ethnicity and religion, Okeke said.
"It is difficult to have national unity in multiparty politics. The only way to stay unified is to bring all people under one umbrella and break ethnic alliances," he told the Global Times.
Of the Igbo ethnicity in Southeast Nigeria, Okeke said his tribe has its own political party. "In so many cases if one wins a seat at the government, he will only do things for his people, and work selfishly to improve only his community without thinking of the national growth."
Okeke believes the divide between the Muslim-majority north and Christian-majority south is another major obstacle in administering the country for the common good.
What disappoints Okeke is that elections in Nigeria can be easily manipulated by the powerful and the wealthy. Corruption and malpractice congest elections in the country, he added, describing what he said is a common practice in his hometown, in which candidates hire jobless young "thugs" to threaten voters and tell them what to do. Those who refuse are beaten.
There are plenty of young people who are willing to be hired and taken advantage of by politicians for just a little money, he said.
Figures from Nigeria's National Bureau of Statistics show that the unemployment rate rose to 18.80 percent in the third quarter of 2017. Unemployment in Nigeria averaged 10.63 percent from 2006 until 2017. 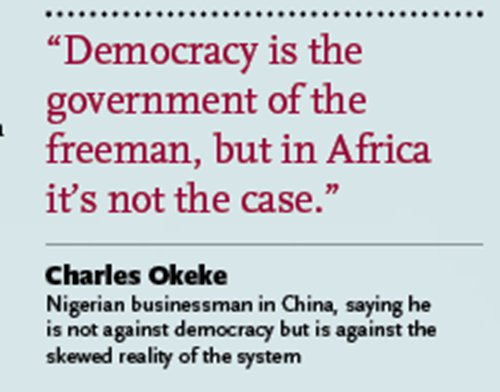 Pursuit of meritocracy
The problems of Nigeria are the problems of Africa, Okeke claims. Following the wave of African countries winning independence after driving away European colonizers in the 1950s and 60s, many adopted a multiparty system.
But Okeke believes their democracy is badly manufactured. He is not against democracy, but is indeed against the skewed reality of the system, he said. "Democracy is the government of the freeman, but in Africa it's not the case."
There is no one-size-fit-all democracy, he believes, which has constantly evolved throughout history, from decade to decade, country to country. He cited the US, which not too long ago used to ban women and races other than whites from politics. He believes Nigeria should not stick to the ineffective framework of Western-style democracy, but rather a democracy of African characteristics.
His ideal political model is what he calls a "meritocracy," which will ensure that only those who are educated and talented can become statesmen. In such a paradigm, he would eliminate the petty differences of political parties and bring all people together under one party to avoid lengthy and corruption-infested campaigning.
At the grass-roots level, Okeke would strictly limit the number of candidates and ask educated party members to help voters understand what each candidate can do for them, then assist them in the voting process.
For higher levels of election, all candidates must be with an organization, either a trade union or an educational institute, to verify their expertise and intelligence. Under the Okekeian model, all campaigning would be held within the party itself instead of in the public, to save public money and resources.
For Okeke, developing the economy and bringing the country forward is what Nigeria is in urgent need of and should be prioritized. "If our goal is to develop our country, why do we waste time and resources on disagreements?"
Each country is unique
Wang Zhanyang, a professor at the Central Institute of Socialism, said it is understandable that Okeke would have such ideas.
"Developing countries would benefit from a certain level of authoritarianism in economic development, which is a universal phenomenon," Wang said. "Like Singapore, Britain during the Victoria era, and Spain in its heyday, they were all authoritarian states when their economies took off."
However, Wang does not encourage other countries to copy the complete Chinese model. Rather, they should develop a political economic system with their own characteristics, as "each country is unique."
In April, Okeke brought his new book and ideas to Nigeria's Beijing embassy. He told officials there that the reason behind writing such a book was to "improve the economic and political situation of Nigeria" and to "help move the country from stagnation to a place of prosperity."
He then traveled back to Nigeria and tried to introduce the book to a political party and some university teachers.
There are currently 68 registered political parties in Nigeria, and Okeke acknowledges that he still has a long way to go before this bold idea will ever be realized.
After more people got to know about Okeke's book and his political advocacy, he has received polarized reactions among the African expat community in China. Some people said he had lost his mind.
Okeke estimates that about 30 percent of the population back in Nigeria would support him, but he said the number is normal because a lot of people have never experienced anything different and are afraid of trying new experiences.
Their biggest concern, he estimates, is that their "fundamental rights" would be infringed upon, which Okeke said is "nonsense."
Okeke said he feels confident to respond and his response will be straight and direct.
He said human rights are a relative concept. Rights in the US, according to him, do not necessarily equate to rights in Nigeria. "They carry guns in America; we don't in Nigeria."
He relishes the freedom of such political discussions. "You are free to agree or disagree with me. That's the beauty of life."