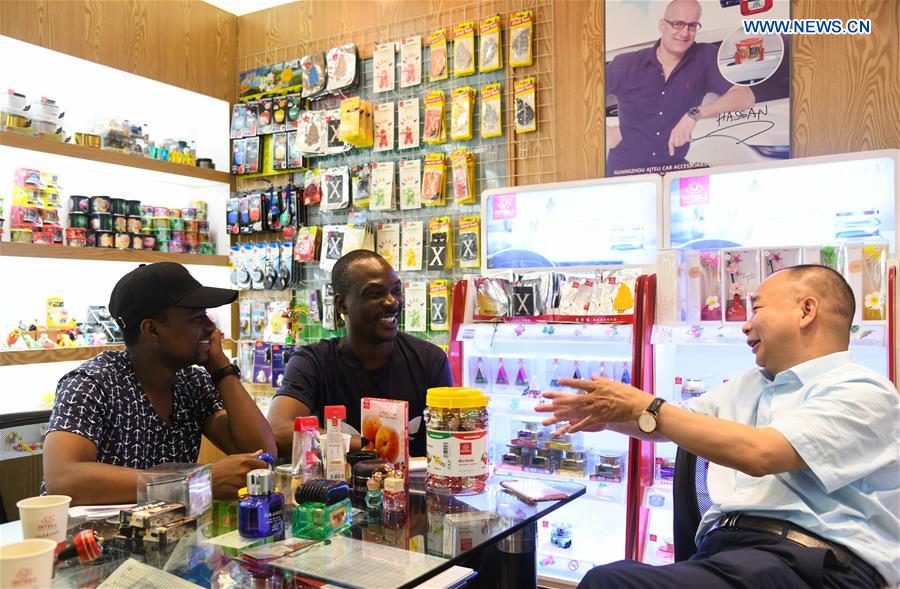 Chinese Ambassador to Nigeria Zhou Pingjian and Nigerian Foreign Minister Geoffrey Onyeama have slammed recent rumors saying that some Nigerian citizens are being discriminated against, chased out of their homes and banned from restaurants and hotels in Guangzhou, South China's Guangdong Province.

The two made the remarks during a meeting on Tuesday in Nigeria.

Onyeama said that viral videos on social media platforms had been causing concern to people in Nigeria until a Nigerian businessman in Guangzhou posted an audio clip explaining what was really happening.

According to the businessman, some Nigerian citizens were confirmed to have COVID-19 after arriving in Guangzhou recently. The owner of a restaurant that was popular with many Africans, including Nigerians, was also confirmed to be infected.

Following these discoveries, local governments closed these venues and required the people involved to undergo a 14-day quarantine along with other strict policies to prevent the virus from spreading.

People under mandatory quarantine were not allowed to return their homes or hotels, but some media incorrectly interpreted the issue based solely on videos on social media platforms, alleging that Nigerians, and African people in general, were being discriminated against during Guangzhou's anti-epidemic battle.

Onyeama said he had verified what the businessman said in the audio post with the Chinese Embassy in Nigeria.

There is nothing wrong in Guangzhou applying strict anti-epidemic policies based on the experience of Wuhan, but officials from the embassy also admitted that Guangzhou authorities needed to improve their communication while implementing the policies, according to Onyeama.

It would be better if Guangzhou authorities had informed the consulates of African countries in the city in advance so that the two sides could work together to implement anti-epidemic policies and avoid misunderstandings, Onyeama said.

He said that in the videos that some Chinese shops had put up notices barring entry to Africans, which would lead African people to think of their history of mistreatment, which is definitely unacceptable.

As for the individual cases, Ambassador Zhou reiterated that China holds zero tolerance of racism and Chinese governments will definitely correct such wrong behavior once it is discovered.

McDonald's temporarily closed one of its restaurants in Guangzhou after reports that it had put up a notice barring Africans from entering. The company also apologized for the notice, according to a BBC report on Tuesday.

Now we have learned the truth and we are happy that our institutes in China are working close with their Chinese partners, Oyneama said, noting that Nigerian officials in China sent him a video Tuesday morning showing that Nigerian citizens quarantined in Guangzhou had all received a gift package from the local authorities as a sign of China-Nigeria friendship.

Zhou stressed that China-Nigeria relations were unbreakable, noting that the Guangzhou government is fighting against the epidemic, and not Nigerians, Africans or any foreigners.

He explained that Guangzhou had reported 119 imported cases as of Monday, including nine Nigerians and 10 from other African countries. The city reported 60 silent coronavirus carriers as of the same day, including 57 Africans.

The data proves that African citizens are a high-risk group in Guangzhou, and that thorough screening and tests will protect their health as well as Guangzhou domestic residents'.

According to Zhou, Guangzhou has required more than 15,000 people to undergo quarantine, either at home or at designated centers, including 4,600 foreigners from 13 countries including African countries, Russia, the US and Australia.

He said that Guangzhou authorities are improving their working methods and have established effective communication mechanisms with African consulates.